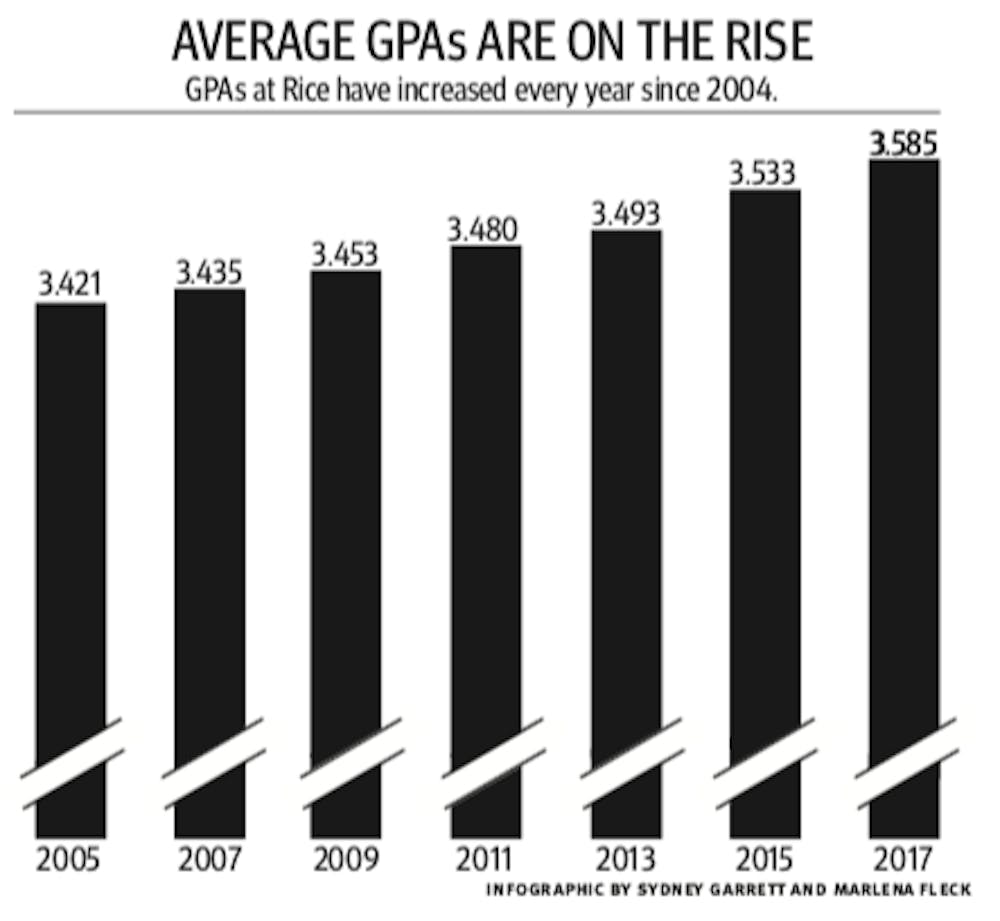 Students earning a course grade of A+ will receive a grade point value of only 4.0 starting this semester, rather than 4.33 as in years past. The change comes after a motion passed by the faculty senate on a 12-9 decision in March 2014 to account for grade inequity and inflation.

Average GPAs have been steadily increasing for over a decade, with the average semester GPA for undergraduates reaching a peak of 3.609 last semester, according to data obtained from the Office of the Registrar.

While average GPAs have continued to increase, the variation among undergraduate GPAs has decreased. This trend is indicated by a decrease in the standard deviation of undergraduate GPAs from a peak of 0.612 in Spring 2012 to 0.532 last semester.

The 2014 decision was reached following a grade inflation investigation conducted by a working group created by the 2012-2013 faculty senate. The working group was made up of eight faculty and staff members and one Student Association representative, according to Jane Grande-Allen, one of the co-chairs.

According to Grande-Allen, the decision was primarily motivated by inequity in the assignment of A+ grades and how students reacted to such an imbalance.

“This imbalance had many consequences, such as students choosing majors, courses or professors based on grading trends instead of their own merits,” Grande-Allen said. “And faculty would occasionally be told by students, ‘I need to get an A+ in this course or you will ruin my GPA.’”

Furthermore, the senate was concerned by how A+ grades affected Latin honors at graduation, according to Grande-Allen.

“The A+ imbalance also affected the Latin honors a lot,” Grande-Allen said, “so much so that the faculty senate the previous year had chosen to base selection for Latin honors on GPAs within each school as opposed to all across Rice, as it had been done before that change.”

The working group spent two years compiling and analyzing data on undergraduate GPAs before publishing its final report in March 2014. The report showed a high degree of variation in grading practices across schools, majors and even different sections of the same course, according to Grande-Allen.

“We looked at MATH 101 and PSYC 101 as examples of courses with many sections,” Grande-Allen said. “The variation in percentage of A grades often ranged from [approximately] 20% to 75% from year to year and sometimes within a single year depending on who was teaching the section.”

In its final report, the working group recommended three motions to the faculty senate for approval: mandating faculty-wide discussions within academic programs about grading practices at least every 5 years, reducing the value of an A+ from 4.33 to 4.0 and requiring promotion and tenure abstracts to include additional evidence beyond student ratings, such as teaching observations or syllabi, assignments and exams.

While all three motions were approved in March of 2014, the motion on A+ grades is the last to go into effect. According to faculty senate minutes, the implementation of this change was postponed for four years so that all students who would be affected by the change would be notified about it prior to their arrival at Rice.

“We looked at practices at peer institutions and this was a common practice,” Evan Siemann, the other co-chair of the working group, said. “There were other potential changes that were brought to the Senate for consideration after consultation with faculty, staff and students and this particular one was well received.”