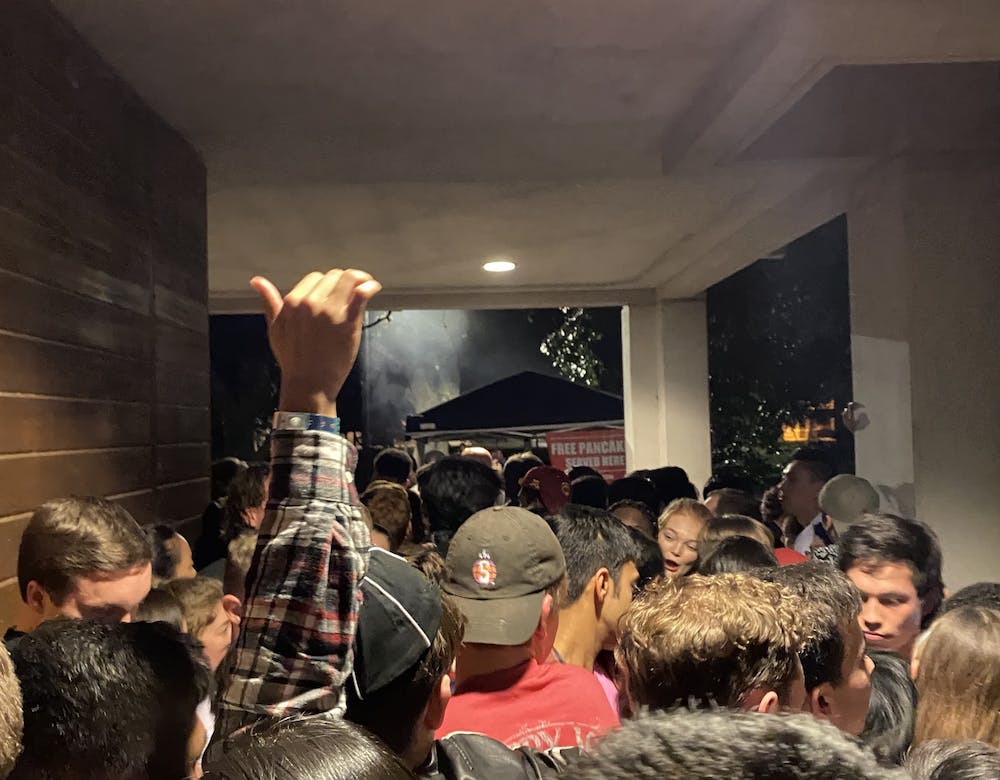 McMurtry external socials sold wristbands for $2 during the week leading up to the party to limit the number of attendees, according to a statement to the Thresher from McMurtry President Joyce Chen on behalf of all the external socials and Chief Justice Augi Liebster.

“With [the party’s] history in mind, we decided to limit the number of possible attendees via a wristband system,” they said in their statement. “Ticketing this year for $2 allowed us to hire extra RUPD officers and cap the number of people who can attend the public.”

Jared Snow, a Will Rice College sophomore, said he arrived at the Y2K line at 10:45 p.m. and was told at 11:30 p.m. by a security volunteer that he would have to wait two more hours.

“I gave up because I didn’t pay $2 to wait for almost 3 hours in the cold, only to get 30 minutes of party,” Snow said. “I was disappointed when I showed up to Y2K, and it appeared that they had very similar problems with capacity and line overcrowding that they did last year.”

Doubting the possibility of a refund, Snow said he ended up returning to the party at 12:30 a.m. and was able to get into the party at 1:15 a.m. According to Chen, everyone with a wristband who waited in line got into the public and the line was empty by 1:17 a.m.

The Murts said the external social chairs sold more tickets than the capacity of the McMurtry commons since they assumed people would “stream in and out” during the four-hour event. Following rumors about the overselling of wristbands, Chen sent a message to a McMurtry GroupMe, of which the Thresher obtained a screenshot. “The rumor going around that we oversold for Y2K is 100 percent not true,” Chen, a senior, wrote.  “[Our] externals ran models ... and capped ticket sales so that everyone can get in, but if everyone tries to ‘beat the line’ and all show up at 10 p.m., I can guarantee you that we’ll get shut down [like] last year.”

The Murts declined to release data about the number of wristbands sold and answer questions about the “models” used, upon multiple requests by the Thresher. They said that the total number of available wristbands was determined by taking into account data from other popular public flows, and that the socials also consulted RUPD, the Office of Risk Management and the McMurtry adult team.

“There is a line at every popular public, and we cannot control when people come or how long they stay,” they said.

Snow was also a two-time organizer for Architectronica, the public party put on by the School of Architecture. After a shutdown of the 2017 party due to unsafe line conditions, Snow and the organizers implemented a paid wristband system for the 2018 party and moved to QR code tickets via OwlNest for the 2019 party.

“For Architectronica, which is an event run in a very similar way insofar as ticketing, we only sold 25 percent over the fire code capacity of our space, and we never had a line outside for more than a few minutes at a time when large groups arrived and had to check in on OwlNest,” Snow said. “I think it was unwise of Y2K to sell ticket numbers clearly much more over their capacity, knowing the reputation that Y2K has as an event that one must arrive early to.”

Zain Imam said that he and his friends arrived around midnight, but decided to leave after estimating upwards of a ninety-minute wait.

“I felt simply scammed,” Imam, a Duncan College junior, said. “I was looking forward to enjoying a night with my friends, but unfortunately, our hopes were dashed by the poor handling of Y2K. Why have wristbands if you cannot accommodate everyone?”

COVID test site differences, a fourth option in the works