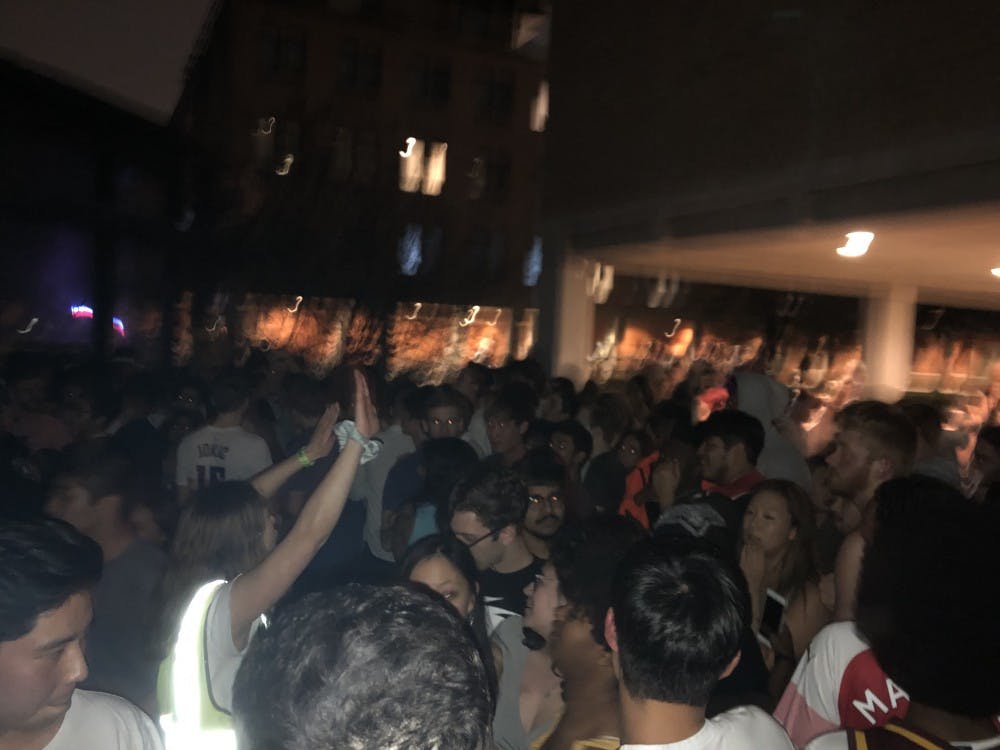 The line for McMurtry College’s Y2K-themed public party grew increasingly unsafe throughout the night, even leading to a hospitalization, until it was dispersed around 11:30 p.m. and all further entry was denied, according to Julia Robinson, a McMurtry external social.

According to the Rice University Police Department, officers had to shut the line down for the safety of people in line as well as officers and party organizers.

“People still standing in line outside began to push and shove, which was a dangerous situation not only for people in line, but also for officers and organizers trying to manage the crowd,” reads a statement from Clemente Rodriguez, RUPD’s Public Information Officer, said in a statement to the Thresher.

Only about half of the people who arrived outside made it in, and the line was chaotic, with people in the front falling after being pushed from farther back, according to Robinson, a McMurtry College sophomore. She said she was appalled that multiple men threatened to hit her when she told them not to cut.

Robinson said she helped plan Saturday night’s public and that after Y2K reached capacity early last year, a vast majority of planning effort went into the line this year.

McMurtry’s president, chief justice, two associate justices and five security officers patrolled the line, with magister Chris Stickney and three Rice University Police Department officers controlling the entrance. Augi Liebster, McMurtry chief justice-elect, said the line wrapped around multiple segments of McMurtry’s outdoor corridors before doors even opened, and that there were 800 people in line at 9:50 p.m., 15 minutes before anyone was let in.

“Capacity was 450 and RUPD kept allowing us to bump that up because we'd hit 450 and there was room for more, [which] we hit around 15 minutes into the event,” Robinson said. “We wanted to keep the line moving, so they kept letting us bring more people in until we hit 900.”

Robinson said McMurtry Commons reached capacity at around 11:30 p.m. and a decision was made at that time to stop anyone else from entering. The line had become claustrophobic, with many people pushing each other out of frustration as the rate of entry out of the line slowed, according to Robinson. She said at the line’s worst, all eight RUPD officers on duty that night were at the front, trying to control it. Liebster, a McMurtry sophomore, said he was working to control the line and at one point was physically pressed into the glass doors at the college’s entrance.

“We were people in positions of power in that situation, so just imagine being someone in line,” Robinson said. “A girl got sent to the hospital to get stitches because she had her eye bust open after being pressed up against a concrete column.”

An anonymous Y2K attendee said that she waited in line from 10:20 until 11:30 p.m. when she got a message from a group chat with her college, saying that people could enter by crossing from Duncan’s second-floor Private Dining Room to McMurtry’s PDR.

“We took the elevator down, and there were security and they told us to go back and then we did go back,” the attendee said. “But we decided there was no way we weren't going to get into the public. So we did it again and then we walked past security. [A security officer] did say ‘wait,’ but we just kept walking and we got into the public. I looked outside and there were still people in line, so I was confused because there was a lot more room in here.”

Robinson and Liebster said a negligible number of people entered the party that way, but they barricaded the second floor of West Servery when it was brought to their attention. In the 45 minutes after further entry was halted, Robinson and Liebster described the commons as busy but comfortable. The crowd inside had thinned by about 1 a.m. since people were only able to leave and not enter. They said they were careful about the language they used when dispersing the line; they told people that the party was closed and intentionally avoided saying it was shut down. They said they did not open another line that could be potentially just as dangerous, because it would have been rude to do when they had dispersed the first line by saying they would not let anyone else in.

“The line was something out of our control that we did everything in our power to deal with,” Robinson said. “It doesn't overpower the success of the night and the people that did get in had a very great time. A few people were upset because they would look in the commons and see that it wasn't at capacity.”

Both Robinson and Liebster said they felt that the only way popular public parties can control attendance is to start issuing wristbands, and they recommend a free wristband system for the planners of Y2K next year. They cited the 2017 shutdown of Architectronica, the public hosted by School of Architecture students, as another instance where students poorly handled not being able to enter an overcrowded event. In 2018, a set number of Architectronica wristbands were sold to avoid the hostile situation that occurred in line the year prior, which caused the shutdown.

“There are enough examples of Rice students feeling entitled to these parties that they behave without common sense and completely selfishly,” Liebster said. “And it's fair to say there are enough occurrences similar to Y2K that you can't blame the party planners. If other colleges start charging entrance to their publics to control the line, Rice students do not have a right to complain because they have been the ones escalating these situations to the point of danger for their fellow classmates. Now we have to institute wristbands so the party can remain safe.”