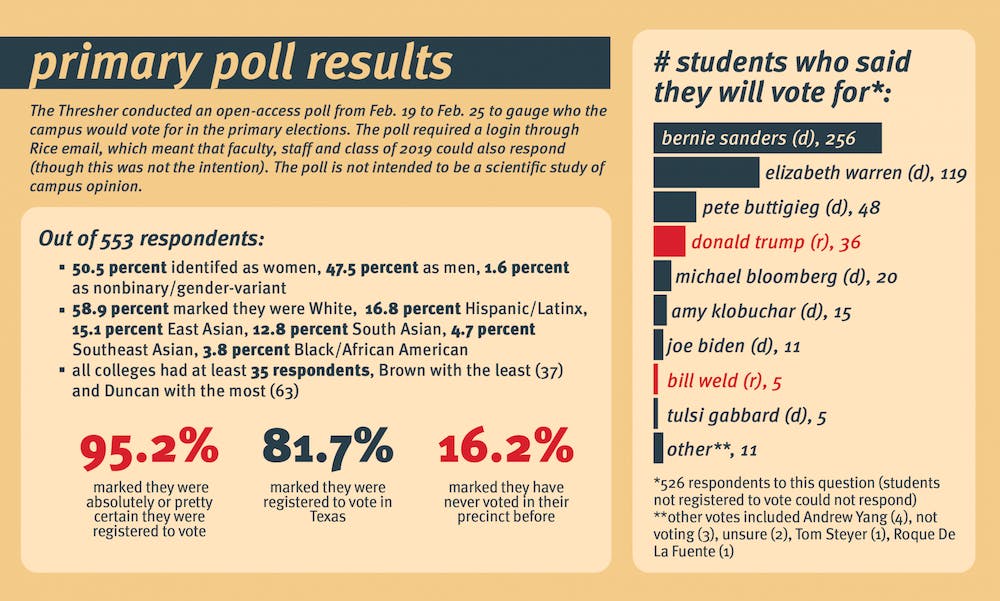 To Carolyn Daly, the external vice president of Civic Duty Rice, the lack of a polling location on campus isn’t only about accessibility — it sends a message about how much political parties value their youth voters.

“It’s really important to have a voting location on campus for students, just to make things accessible for people who might not have transportation or might have so many classes that they don’t have the time to get to the polls,” Daly, a junior at McMurtry College, said. “But it also shows that the county is valuing youth voters.”

Civic Duty Rice, a nonpartisan civic engagement club, is one of three student-led political organizations that make up the Rice Vote Coalition. The coalition, which includes the Rice College Republicans and Rice Young Democrats, worked with the administration to organize shuttles to take students to nearby polling locations on Thursday for early voting and on Election Day. They’ve also collaborated on voter registration and information efforts.

The lack of a polling location on campus isn’t the only issue student organizers have faced regarding the primaries. Daly said Civic Duty Rice has found it challenging to shift some of the focus on campus from the national election to local ones.

“It’s really important for students to be informed on more local and state issues too, because those have a huge impact in students’ daily lives whether they realize it or not,” Daly said.

“A lot of out-of-state students don’t really know what they need to bring to vote. If you’re out of state, you can’t use your driver’s license alone. You have to sign a reasonable impediment declaration, which is confusing and bureaucratic. You can also bring a passport, which a lot of people don’t have here,” Scannell, a Martel College junior, said. “Spreading awareness that you can vote — it’s just sort of harder — is one of the main barriers.”

This uncertainty surrounding voter identification laws made it difficult for some students to advocate for themselves when they were illegally turned away away from polls during last November’s municipal election, Scannell said.

“We had no real way to get in touch with the county to be like, ‘Hey. This is illegal,’” she said. “We complained enough that we got [the phone numbers of] election administrators so that if people are getting turned away again, we can hopefully intervene.”

The Rice Young Democrats will not endorse candidates for this race to “make sure that everyone who identifies with the Democratic party or left of it can share their opinions and not feel alienated by majority rules,” according to Scannell, but she says they will likely endorse in the general election.

The Rice College Republicans will also not endorse candidates for their primary. According to Thomas Keller, interim president of the club, this is because the Republican race for the presidential nomination isn’t very contested.

“Functionally, I would be shocked if anyone other than Donald Trump won [in the primaries],” Keller, a Duncan College junior, said. “So we’re not taking any particular action other than just watching and seeing how it pans out.”

Still, Keller believes students should exercise their right to vote in every election and said there is nothing in particular about 2020 that changes that.

“Every year, it is said that this is the most important election ever, but I think that this year it is actually true,” Belsha, a Wiess College sophomore, said. “There are so many things on the line right now that we can’t put off any longer. Climate change is obviously a huge one.”

Owls for Bernie, a group of students supporting Bernie Sanders’ campaign for president, is the most visible effort on campus to directly support a presidential candidate. (The only other effort is an Instagram account supporting Pete Buttigieg that hasn’t posted in a month.) Belsha founded the group after working directly with the national campaign last summer. He thinks the lack of other candidate-specific organizations at Rice reflects the Sanders campaign’s emphasis on grassroots organizing.

Although they’re not part of the Rice Vote Coalition, Owls for Bernie has also been contributing to voter registration and information efforts such as public tabling. However, due to rules the university has regarding candidate affiliation, event organizing has been a little trickier for the group.

“[The Office of Government Relations has] made it clear that any event or organizing effort which requires a request for resources from Rice University in order to support a candidate will have to be denied. That means reserving rooms on campus,” Belsha said. “I totally understand why those rules exist, but it has been kind of frustrating to deal with.”

Belsha is referring to the university’s partisan political activities policy, which says that Rice cannot use any resources to support or oppose a candidate for public office.

“We don’t want to temper anyone’s enthusiasm for the electoral process, but it’s important for all of us in the Rice community to understand that increasing voting participation across campus is different than increasing turnout for one candidate over another,” Nathan L. Cook, director of government relations, said. “The university can’t help turn out the vote for any particular party or candidate, but we can help get students to the polls.”

Although Scannell said she is grateful to the Office of Government Relations for providing the Rice Young Democrats with funding for things like shuttles and event food, she also said she wishes the administration would do more.

“[Funding has] been super great, but on the education and information end, they just don’t really talk about it,” Scannell said. “They’re willing to throw money at the problem, but there’s not a lot of institutional, ‘Here’s how we increase voting.’”

Daly said student leaders of the Rice Vote Coalition and other political organizers across campus are doing their part to provide voter education and information. To Daly, this mission is vital given how intimidating voting can be.

“I hear from students a lot that they’re not informed enough, or they don’t feel like their voice matters, but it really does,” Daly said. “There are a lot of people on campus who would be happy to help you get informed and help walk you through this process, because I know it is hard and it’s really complicated when you’re going through it for the first time, but it’s worth it.”