“The Realistic Joneses” fails to satisfy 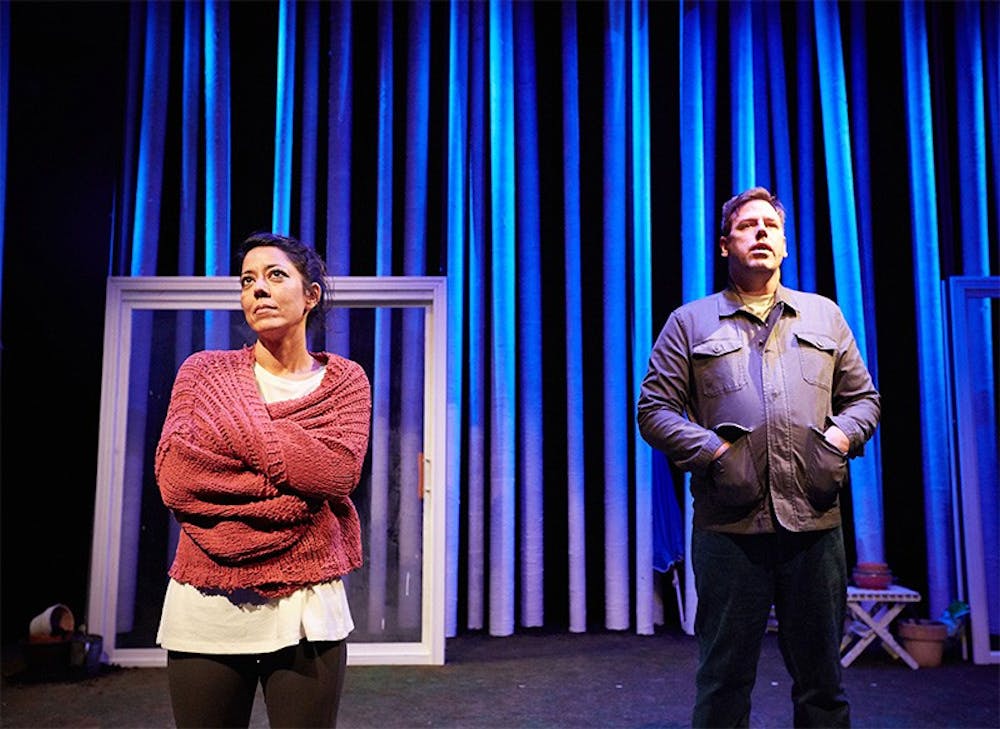 Spoiler Alert: This article contains spoilers for “The Realistic Joneses.”

Surrounded by the audience at three sides, “The Realistic Joneses,” a play by 4th Wall Theatre Company, is an intimate production of Will Eno’s script. The play follows two couples with the last name Jones that have moved in next door to each other as they work through similar issues at different stages of life and in their relationships. The show unsuccessfully attempts to address issues of illness, aging and communication with hefty doses of misogyny and static characters.

While the actors deliver stunning performances, their extensive efforts prove unable to elevate the dreary script to a truly enjoyable experience. “The Realistic Joneses” tries desperately to be realistic through enforced mundanity, a convoluted plot and stiff dialogue.

The show opens with Bob and Jennifer Jones sitting in their backyard, years into a lengthy marriage. Jennifer says, “It seems like we don’t talk,” to which her husband retorts, “What are we doing right now? Math?” But Jennifer is right, andas the script addresses more than once, the characters seem to talk at each other rather than to each other. The couple’s lack of communication is represented literally when, silence pervades the opening scene as the threat of Bob’s terminal illness looms over the couple.

This silence is disrupted by the arrival of the energetic and much younger couple, John and Pony Jones. Their arrival offers a brief respite from what up until that, to this point, has been a drudging through the script. However, their vitality fails to sustain the script as John slips into over-exaggerated quips that would never seem natural  in an actual conversation.

Real life does not follow plot points, and there’s something to be said about Eno’s adherence to this principle throughout the script. There is little follow-through with many of the issues that are brought up. Affairs are hinted at and confrontations begin but they are ultimately robbed of any resolution. The show ends as it begins: unsatisfyingly. The four central characters end the play together with little development made, and it seems almost like a nihilistic view of what realism is. Rather than allowing his characters to be meaningfully shaped by their experiences, Eno drives the Joneses in cyclical patterns of unchanged behavior and failure to address the tensions between them.

While “The Realistic Joneses” attempts to present a realistic insight into the characters’ lives, Eno’s notion of realism on stage is apparently to present unhappy marriages in which women are either used for emotional labor in the case of Bob and Jennifer or deceived by their husbands (albeit with good intentions) in the case of John and Pony. Bob refuses to acknowledge his illness, placing the burden squarely on his wife’s shoulders without concern for her emotional wellbeing. John’s actions are somewhat diametrically opposed to Bob’s apathy as he actively lies to Pony about why they moved and choosing to tell  Jennifer about his condition instead of his own wife.

Beyond the story’s depressing plot fueled by emotional abuse, problematic elements of the script are uncomfortably exploited for laughs. Bob seems enamored by Pony’s appearance the moment they meet and more or less admits it  in front of both of their spouses. Later, he peers into his neighbor’s house  to catch a glimpse of Pony in her sleep only to be caught by John, who sardonically acknowledges Bob’s perverted intentions. Yet instead of ousting Bob from his backyard, John requests that his neighbor look out for Pony in the event that he leaves, saying, “Be nice to Pony.” This does not come as a surprise, though, since John flirts with a visibly uncomfortable Jennifer earlier in the show, eventually admitting to  stalking her before they met. Both of these interactions seek laughter from the audience without addressing the deeply troubling nature of infidelity and sexual harassment. But of course, Pony is eventually implied to sleep with Bob, and Jennifer comes around to John’s prodding as women often do in narratives written by men.