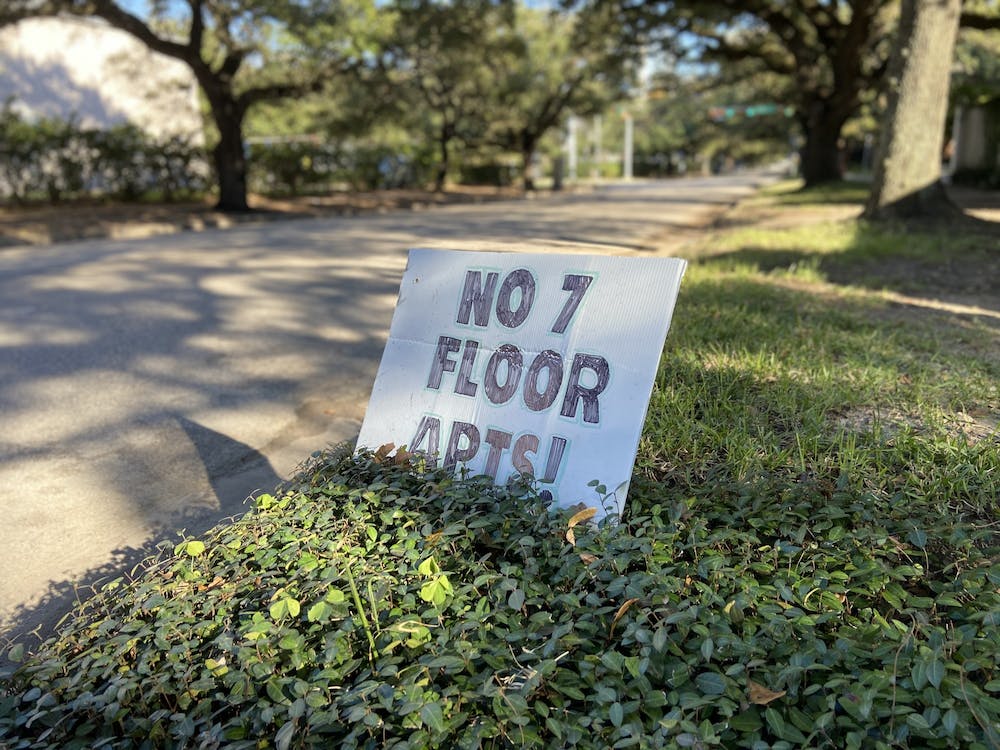 Owl House Properties, a local property management company, plans to combine, or replat, lots 1933 and 1937 Dryden Road, in May 2020 into a one-lot, a four-story apartment complex, according to company president Ben Bahorich (Will Rice ’10), drawing backlash from some Southgate residents. The property management company, which owns several properties that are primarily occupied by Rice students, has twice been criticized by students in Thresher coverage in the past year for poor living conditions, unfair leases and delayed renovations.

Bahorich said the company decided to construct a four-story apartment complex after weighing profits against the community’s hesitations with having a tall building in their residential neighborhood just south of campus.

“Four stories — that’s our proposed structure, which is the smallest structure that we can actually do where we [would] make economic returns,” Bahorich said.

However, members of the Southgate neighborhood have shown signs of disagreement with the proposed replat. Around the neighborhood, signs with phrases such as “No replat” and “No 7 story apartments” have surfaced protesting the new complex. Although these signs suggest that the complex will be seven stories tall, Bahorich said the company is planning for the complex to be four stories tall.

“I think we got off on the wrong foot with them a while back because we weren’t sure what the process was and didn’t know anybody in the community,” Bahorich said.

According to an Owl House tenant, who wished to remain anonymous, many residents of the Southgate neighborhood have expressed concerned about the replat.

“The people on [the] NextDoor [app] are very unhappy about this,” they said.

Bahorich said residents have expressed mistrust regarding the promised height of the new building. According to Texas platting statutes, once the replat is approved, Owl House will not be legally obligated to limit their construction to four stories.

“I think that the neighbors are still concerned because they don’t know if we’re telling the truth,” Bahorich said. “So they might think ‘Oh, they’re just going to get a replat and build whatever they want.’”

Since January of this year, Bahorich said his company has met with members of the Southgate Civic Club, the neighborhood organization in charge of ensuring that deed restrictions are met, on four separate occasions to discuss the replat.

“We’re working with them right now much more closely, and so we’re kind of getting on the same page about what this is going to look like,” Bahorich said.

However, Edward Aviles, an appointed member of the architectural review for the Southgate Civic Club, said that the meetings have mainly consisted of learning about the plans.

“I wouldn’t characterize it as working with the community because that can sound like we’re actually working together,” Aviles (Hanszen College ’92) said.

Jenny Beech, president of the Southgate Civic Club, said the replat has not yet been approved.

“The developer needs the Southgate Civic Club’s approval of the building plan prior to construction,” Beech said. “We have not yet given that approval, but we are in discussions about the proposed building and hope to reach an agreement.”

Bahorich said he believes prior allegations of unfair leasing agreements have made some Southgate residents hesitant to support the construction of the new complex. In previous Thresher coverage, tenants have reported mold, rat infestations and being coerced into signing leases with little to no information.

“The [Thresher] articles point out there was a lease that wasn’t fair because it had terms that were more beneficial to the landlord,” Bahorich said. “[So] we just [changed] to a standard Texas lease.”

Cameron Wallace, a senior at Brown College and a tenant at one of the properties slated to be demolished, said Owl House has declined to repair the gas in his unit due to the upcoming construction of the complex.

“We don’t have gas. We haven’t had gas for a month and a half or two months,” Wallace said. “They’re not gonna fix it because the building is old and is going to be torn down soon.”

The anonymous tenant said that although Owl House properties claims to be in support of Rice students, their claims are counterintuitive.

“Renting to students with a proposed goal of providing affordable housing and then proceeding to raise the rent doesn’t add up,” the tenant said.

The proposed replat may also affect the rent that students living in the area have to pay. Rachel Luu, who owns and is leasing two properties on Dryden Road to Rice students, said the complex may increase the rent that landlords in the area charge.

“They’re [probably] going to take away what used to be cheaper unit thing and make it expensive [so] it will make other landlords [say], hey, they can charge this much, [so] I can charge more,” Luu said.

According to Bahorich, the company hasn’t officially settled on how much they will charge for rent, but estimates that a 3-bedroom unit will cost between $2,700 and $3,000 per month. The complex will house 18 units, compared to the 8 units in the two existing houses.

Although most of Owl House’s current tenants in the two houses are Rice students, Bahorich said that might not be the case with the new apartment complex.

“I think it would be mostly geared towards medical students,” Bahorich said. “Maybe [Rice] grad students and undergrads as well. I just think since it’s so close to the [Texas Medical Center], it might end up getting rented by nurses and doctors.”