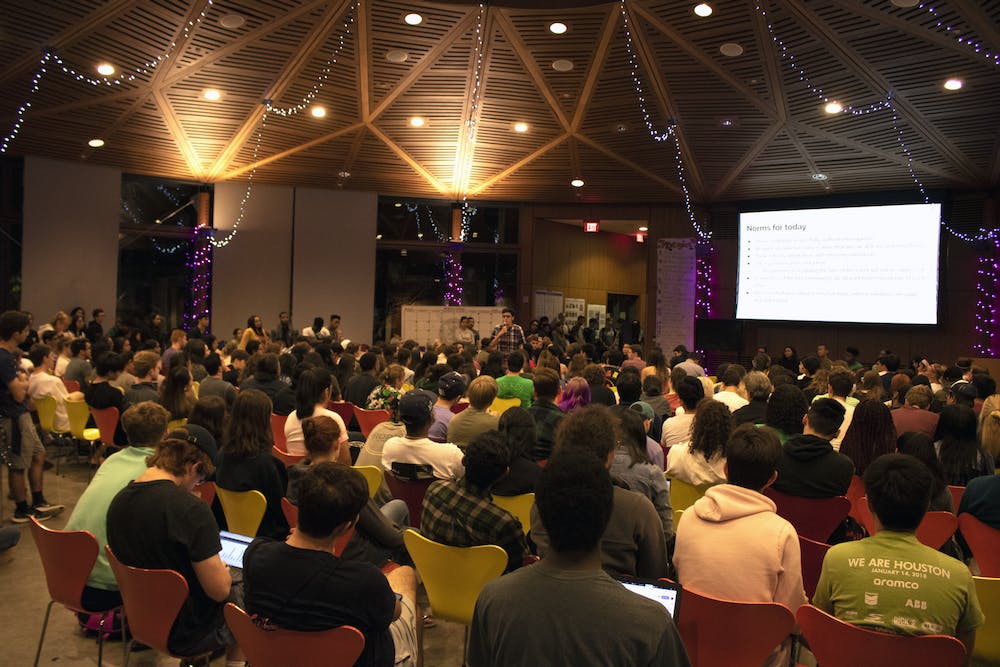 McMurtry College’s Diversity Council hosted a public town hall on Tuesday night to facilitate a discussion with the three students who dressed as U.S. Immigration and Customs Enforcement officers for the Halloween event at Willy’s Pub.

The students’ actions drew student outrage on social media and prompted administrators to respond. The three students, Gio Pecchio, George Huang and Sohil Shah, who are all McMurtry sophomores, had previously issued a statement of apology to the Thresher.

An estimated 200 students from across campus attended the event. Magisters and residential associates from various colleges, Dean of Undergraduates Bridget Gorman and other faculty and administrative officials were also in the audience.

McMurtry President Joyce Chen opened the town hall by recapping the events on the night of Halloween. According to Chen, a fourth student, Ben Collier, who originally dressed as a “stereotypical Hispanic immigrant,” changed outfits prior to going to Pub.

“This is a conversation, not a trial,” Epps, a McMurtry sophomore, said. “Disagreements regarding the facts of the event will not be addressed.”

The four students all expressed remorse for their actions and said it was a learning experience for them.

“I am not proud of my actions, and when I think about my choices Thursday night, it brings me humiliation, shame and disgust,” Huang said. “I ought to have thought about how my actions would have made other people feel.”

Pecchio also expressed regret and shame for his actions.

“I made a poor decision,” Pecchio said. “I've since learned a lot about cultural sensitivity. I do not feel like my job is done after this town hall.”

Pecchio, Huang and Shah then sat facing the audience to answer questions while Collier returned to the audience. They were asked questions such as why they still chose to wear the costumes to Pub after being confronted by members of the Latinx community and why the students did not think about the impact of their actions beforehand.

“I applaud the Latinx community for their actions,” Huang said. “Their confrontation was what led us to realize the severity of our actions.”

Pecchio said he received a call from a friend after arriving at Pub, who prompted him to remove the ICE insignia from both his and Shah’s costumes immediately. Pecchio said he initially had disregarded that friend’s advice back at McMurtry.

“I made the mistake of not listening to a friend who was part of the Latinx community,” Pecchio said.  “And then it was too late. The damage had already been done and people were already hurt.”

The next section of the town hall opened up the floor to any student who wished to speak about how the incident affected them. Epps and Rohini Kumar, a McMurtry College junior and diversity facilitator, moderated the discussion. Multiple students spoke about being undocumented themselves or having family and friends that were undocumented. Students also spoke about how the incident likely impacted Housing and Dining workers as well.

One student, who identified as a member of the Latinx community, shared how the incident made them feel unwelcome at Rice. Editor’s Note: The student was granted anonymity to minimize harm to both them and their family members who are undocumented.

The student said their father crossed the border three times and the student was brought to America at the age of 3.

“Think about the fear and think about the people who are suffering day-to-day because I promise you people do not cross the border for shits and giggles,” the student said. “[My father] did it for survival because being poor in this country is way better than being born poor in any Latin American country at this moment.”

Epps and Chen, along with members of the Diversity Council, closed the event by speaking about the importance of active bystanders.

“We need to emphasize that when people are not upholding these values, it negatively impacts others at Rice,” Epps said.

Chen said that the burden of responding to incidents like these should not only be placed on marginalized groups.

“Hate or intolerance will not be tolerated at McMurtry or the larger Rice community,” Chen said. ”We must take action and make improvements in our culture.”