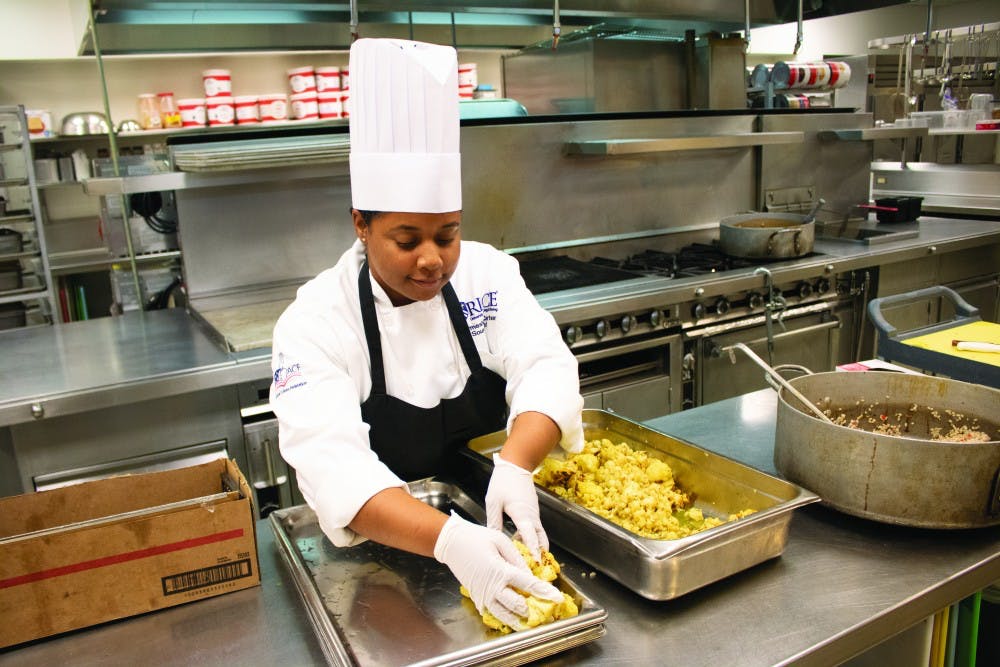 It’s hard to avoid Tasty videos on Facebook. They pop up everywhere, showing you how to make an entire meal using aesthetically pleasing dishware in 10 seconds or less. If you’re addicted to watching these videos, you’re not alone. Jaymeshia Carter, executive chef at Baker College Kitchen, said she watches Tasty videos too.

Carter has worked at Rice for 11 years and is the first Black female executive chef at any Rice servery. She said she gets cooking inspiration from everywhere, often looking up menus to try new dishes. Tasty, she said, is one of her favorite ways to get inspired.

“I’m obsessed with the app, so I go on that all the time,” Carter said.

Carter got her first job at Rice when she was 18, but she wasn’t always a chef. After applying for a job that her high school teacher had mentioned, she began her career at Rice as a cashier. However, Carter had always loved cooking.

“I used to cook with my dad and my mom,” Carter said.

Carter said it didn’t take long for her to gravitate toward food preparation.

“I would go in the kitchen and help, sometimes, with salad prep and hot foods,” Carter said.

Soon, Kyle Hardwick, assistant dining director, noticed her interest in cooking and asked her if she wanted to work in the kitchen. She then joined the cooking staff at South Colleges Servery preparing salads. It was her first cooking job.

In the years following, Carter was sous-chef at South Servery, but said she also had the opportunity to work at almost every other servery on campus. Some of her favorite work, she said, took place at South Servery, which is one of two serveries that has a brick oven.

“At South, we used to make pita and naan in the brick oven,” Carter said. “It’s my favorite thing to do. I miss it.”

Last year, the Baker executive chef job opened up, and Carter sent in an online application. Susann Glenn, director of communications for administration, said outside chefs applying for the job had to perform a cooking test. Carter, however, didn’t need to — because of her work at Rice, the dining directors in charge of hiring were already aware of her cooking skills.

This is Carter’s first year as the executive chef of Baker Kitchen. She said the main challenge of the job is cooking for such a large number of students. But it isn’t cooking that poses the challenge — it’s baking.

“You don’t really have to follow a recipe [when you cook],” Carter said. “But [with] baking, you have to.”

Carter said she plans to be a chef at Rice for at least 20 more years, but said she wants to become a history teacher after she retires from cooking. Glenn said Carter’s instinct to teach is reflected in her work as a chef as well.

“I feel like [Carter is] always teaching people [she] work[s] with, showing them the process,” Glenn said. “I love that about [her].”

Glenn also said she admired Carter’s approach to teamwork, and her instinct to put her team in the spotlight.

“She is humble,” Glenn said. “She won’t ever brag about herself.”