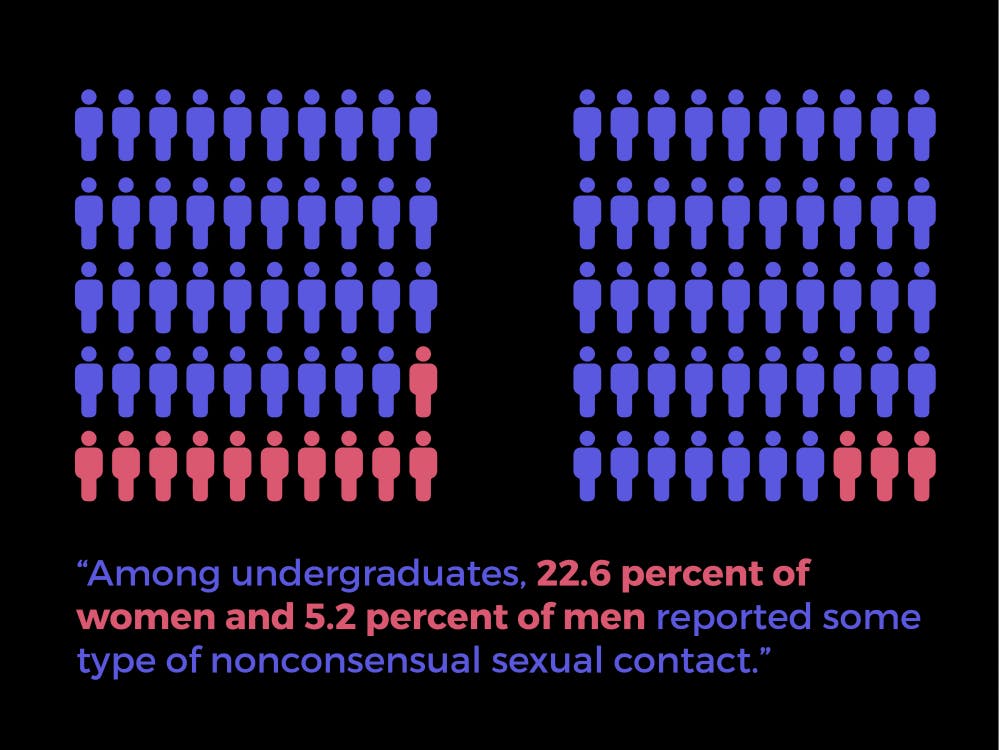 The AAU survey, administered last spring with the Survey of all Students, surveyed 33 universities with a total of 181,000 validated responses. At Rice, 71.6 percent of undergraduates and 63.8 percent of graduate and professional students completed the survey, compared to an average of 20.4 percent undergraduates and 24.5 percent graduate students amongst the other universities.

“I don’t know that we could have collected better data,” Dean of Undergraduates Bridget Gorman said.

The survey follows the 2015 administration of the Survey of Unwanted Sexual Experience, which showed that at least one in four undergraduate women and one in 14 undergraduate men had faced sexual misconduct at Rice.

In an email to the campus, President David Leebron and Interim Provost Seiichi Matsuda said that the numbers are “deeply concerning and require a thoughtful and determined response.”

Overall, 10.1 percent of students surveyed said they witnessed a situation that they believed could have led to a sexual assault at Rice. Of those students, 81.4 percent said they took some type of action, with 54.2 percent saying that they directly intervened in the situation.

79 percent of students surveyed at Rice said they thought it would be “very or extremely likely” that campus officials would take a report of sexual assault or misconduct seriously, with 70.4 percent of undergraduate women indicating so and 80.9 percent of men indicating so. Among all transgender men or women, genderqueer or nonbinary, questioning or not listed (TGQN) students, 58.7 percent indicated similarly.

According to the administration’s executive summary, Rice had the highest response rate among the institutions surveyed. According to Associate Vice President for Institutional Effectiveness John Cornwell, this is most likely due to Rice’s system of the semesterly Survey of All Students, which ties completion of surveys to class registration, although the AAU survey was optional.

“People who have had things happen really want to answer it, people who haven’t really don’t,” Groamn said. “Response rate is a part of it, but there are a lot of reasons why people may or may not participate in the study.”

Although the university response rate was originally closer to 80 percent, the AAU survey eliminated responses from respondents who took less than five minutes to complete the survey or didn’t answer at least one question in the sections regarding sexual misconduct, harassment and stalking.

FROM SUSE TO AAU

In light of the SUSE results, the Critical Thinking in Sexuality workshop was created along with the Students Transforming Rice into a Violence-free Environment liaison program. While the data sets from the SUSE and the AAU are not easily comparable, the administration was able to split the data by school year to look at the differences between students who had CTIS and those who didn’t.

“There is tentative evidence that there is some decline among those first and second year students and we don’t see a comparable decline for third and fourth year students,” Gorman said.

According to Vogt, in the last five years, the Title IX office has also expanded. Gorman said they are anticipating further expansions.

Gorman said the administration wanted to give the student body a few days to read the report before discussing its results and that they have been in communication with Grace Wickerson and Hannah Pearce, SA and GSA president respectively. Wickerson and the SA are hosting a town hall on Monday at 8 p.m., where they will discuss survivor support, Student Judicial Programs reporting and process and CTIS, according to Wickerson.

Gorman said she thinks more students will pay attention to the AAU results given the protests and coverage of the last two weeks following the anonymous opinion detailing a Rice alumna’s experience reporting to SJP.

“It’s brought more of a scope on this issue for Rice,” Gorman said. “I would hope it causes [an] even broader selection of our population to really look at it and think about what it means.”

Gorman said that the administration “always knew this was going to be a year where Title IX was front and center” given the release of this survey data, impending new Department of Education guidelines and changes in Texas legislature regarding mandatory reporting.

“If [SUSE] was phase one, then what’s phase two of our response? We have another point where we can take a tally of where our community’s at. Where do we go from here?” Gorman said. “We don’t view this as done by any stretch of the imagination.”

Editor’s Note: The Thresher plans to release an in-depth look at the AAU data, as well as coverage of the SA town hall, in the upcoming week.