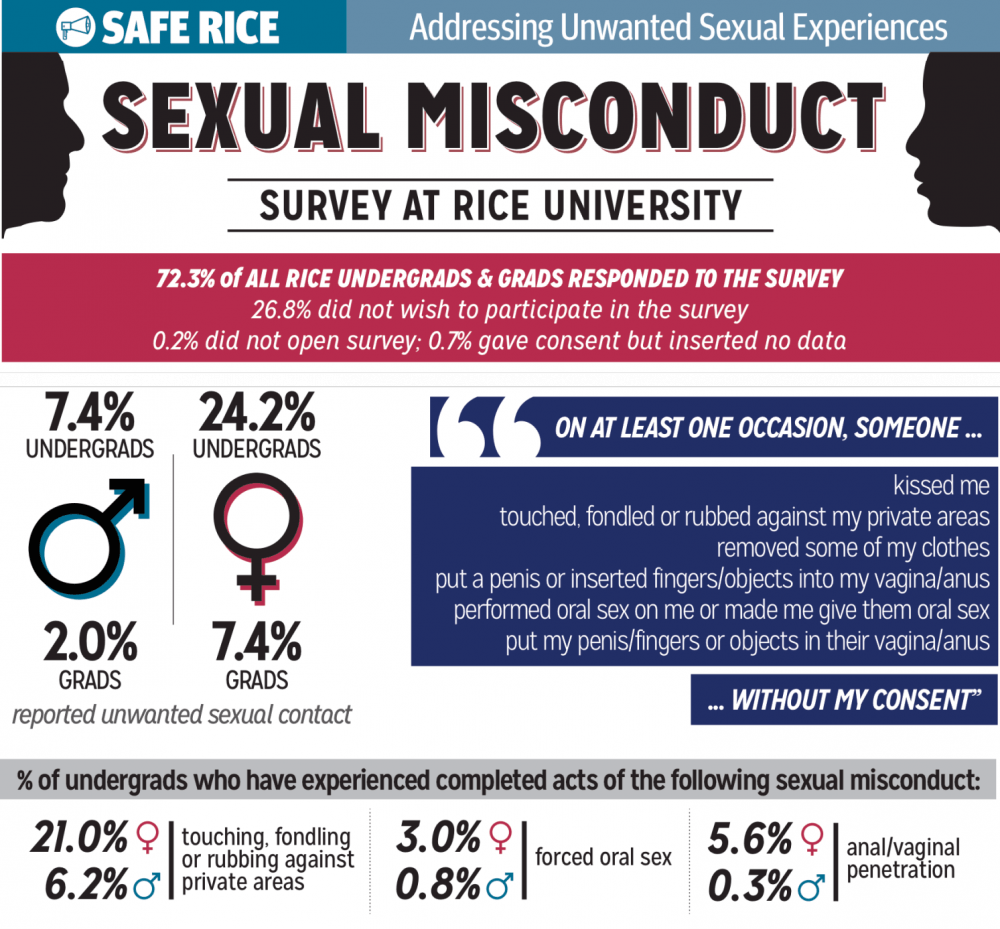 The Rice Women’s Resource Center hosted a discussion on the results of the Survey on Unwanted Sexual Experiences, drawing undergraduate and graduate students as well as members of the administration. RWRC Co-Directors Cristell Perez and Sam Love organized and moderated the event on Wednesday, two days after the results were released.

According to Perez, a Baker College senior, the discussion had three goals: to assess how the campus feels about the results, the current state of initiatives at Rice and steps that need to be undertaken to enact change.

“We [hoped] to create a safe space to foster the necessary dialogue and discussion on preventing sexual assault and supporting survivors the best way we can,” Perez said.

Dean of Undergraduates John Hutchinson, Title IX Resource Navigator Kate Hildebrandt and Wiess College Master Alexander Byrd attended the event. Hutchinson said he was present to answer any administrative questions that might arise during the discussion.

“I stand with all of you,” Hutchinson said. “This is a problem that affects every one of us on campus deeply and emotionally and we really have to come together as a community.”

The discussion began with a reflection on the expansiveness of Rice’s culture of care. Several students, including Student Association Internal Vice President Peter Yun agreed that the strong focus on alcohol can overshadow other aspects of student health.

“The culture of care that Rice students talk about is too centered on alcohol,” Yun said. “Currently, it does a poor job of emphasizing the importance of mental health care and sexual assault prevention. We shy away from these topics because they’re hard to talk about, but well-being involves all of it.”

Attendees suggested Night of Decadence as an example of an event where emphasis on the culture of care may center around alcohol rather than sexual health. Some students said Rice Health Advisors at certain colleges that hold informational sessions on approaching NOD should instead emphasize the latter.

Some students expressed surprise with the statistics present in the survey results, while others said the results were as expected. The survey showed that on average, 18.9 percent of female and 4.9 percent of male undergraduate and graduate students have experienced unwanted sexual contact in their time at Rice.

Graduate Student Association President Lynn Fahey said she found it interesting that the graduate student rates were not altogether different from those of undergraduates, although the latter has more preventive programming in place. Fahey said she found the statistics sobering.

“These are real folks that we know — these are us, these are our friends,” Fahey said. “It’s so important not to forget what these numbers represent.

"Although approximately 40 students were present at the discussion, only about five of the students were male, a fact that attendees SA President Jazz Silva and SA Wellbeing Committee Chair Sanjana Ranganathan raised as problematic. Some attendees also said they felt male students may be less engaged in the issue and feel less inclined to pay attention to sexual assault prevention programs. Ranganathan said she felt the gap between male and female engagement in the issue of sexual assault could be solved institutionally. “New students should have to take a test on Project SAFE and the definition [of] consent,” Ranganathan, a Wiess junior, said. “We take tests on the Honor Code to make sure students understand its importance and complexity, why don’t we take a test on sexual misconduct?”

Ranganathan said she acknowledged this wouldn’t solve the problem of sexual assault, but said it would show new students that Rice takes sexual violence prevention seriously. She said the SA Wellbeing Committee is discussing creating a video outlining the key aspects of Rice’s sexual misconduct policy to help students work through complex information, and lend the human aspect of sexual misconduct more visibility.

“All of these numbers represent people who have had these awful experiences,” Ranganathan said. “A crucial first step to solving the deeper problem at hand is to show students just how much these experiences affect the people that go through them.”

However, Love said it is important not to view Orientation Week as a fix-all for changing campus culture. Perez and Love said moving forward, they will meet with Hutchinson and Title IX Coordinator Don Ostdiek to discuss this issue further. They will also collaborate with student organizations across campus, including the Queer Resource Center and Resident Health Advisors, and graduate students.

“As impactful as whatever new initiatives and programs Rice implements, the reality is that sexual assault has roots in the wider culture of the United States,” Love said. “We have to dismantle the patriarchy — and the strict expectations of femininity and masculinity it upholds — if we want to make sexual assault completely disappear.”

The SA Senate meeting on Oct. 7 will be held exclusively to discuss the results of the SUSE. The college with the most attendees at the meeting, held in the RMC Grand Hall, will win a television.