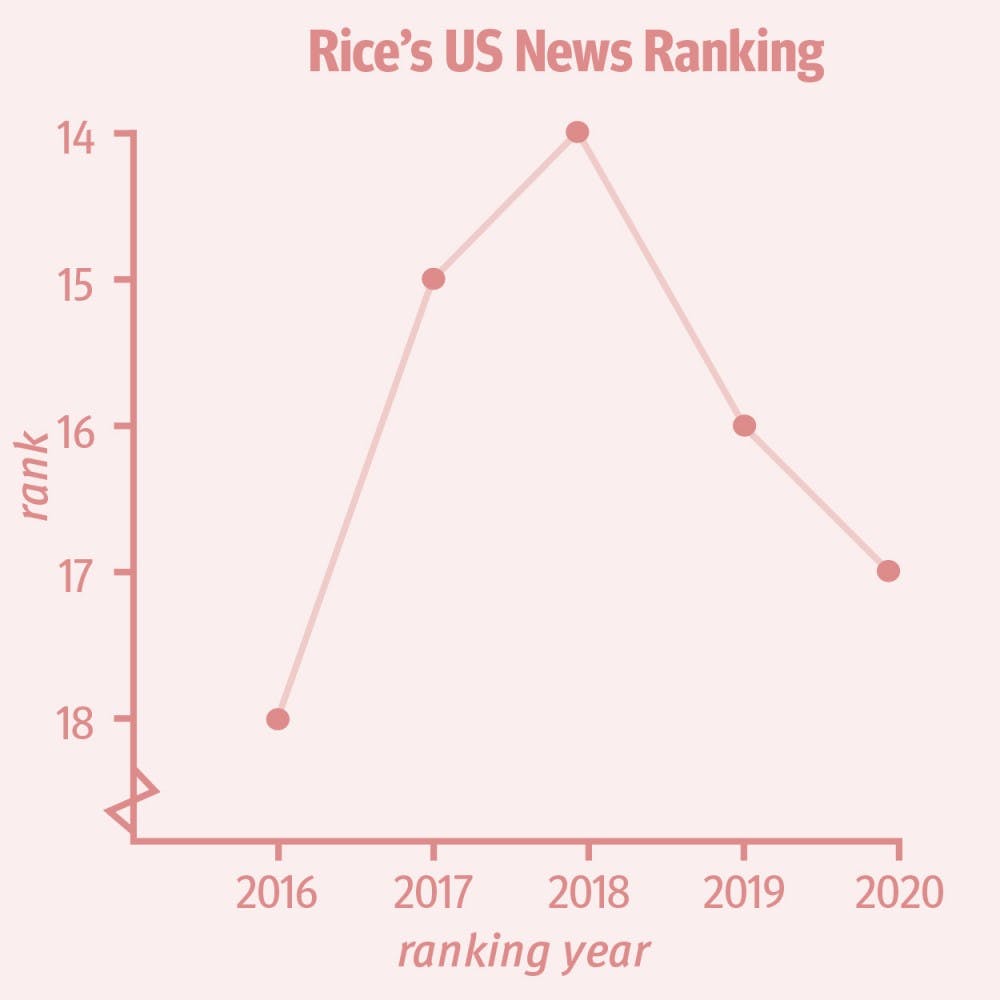 Rice dropped a place in the recently released 2020 U.S. News & World Report National Universities rankings, tying with Cornell University at No. 17. Last year, Rice was tied with Cornell at No. 16 and the previous year Rice was in a four-way tie for No. 14.

According to the Office of Public Affairs, Rice has placed in the top 20 national universities since 1988, when it first appeared on the list. Rice ranked No. 8 this year for “Best Undergraduate Teaching,” keeping consistent with last year’s ranking when Rice had dropped from No. 3 in this category. Rice also placed No. 6 for least debt after graduation.

President David Leebron said that changes in the U.S. News rankings methodology and ranking factors may have impacted Rice’s placement.

“Rice’s rankings over the past 10 years have varied between 14 and 19; small changes are common, especially when there is a change in methodology,” Leebron said. “We were pleased to go up in some categories, including reputation.”

According to an article released by U.S. News’s data analysts, the 2020 rankings place a larger focus on outcome metrics such as graduation rates, retention rates and social mobility indicators. For example, U.S. News added the proportion of students who are first-generation college students to the graduate rate performance calculations.

“In effect, this [gives] schools more credit for their graduation rates when accomplished with higher proportions of [first-generation] students,” the U.S. News analysts wrote. “Economically disadvantaged students are less likely than others to finish college, even when controlling for other characteristics.”

Rice ranked No. 204 nationwide for Top Performers in Social Mobility. The U.S. News analysts said that while the social mobility rank’s underlying data, such as the six-year graduation rate for students awarded Pell Grants, affects Rice’s national ranking, the social mobility rank itself does not directly factor into overall rankings.

“We do know that this year’s rankings had some significant changes in the methodology that were adverse to Rice,” Leebron said. “We don’t know about such methodology changes until after the rankings have been released, so we can’t anticipate them.”

Last year, U.S. News also eliminated the acceptance rate as a factor in ranking, focusing instead on the academic statistics of the entering class. Additional changes included the removal of high school counselor opinions and changes to calculation of graduation and retention rates and faculty compensation.

This year’s matriculating class is the most selective in Rice’s history, and last year Leebron rolled out an expanded financial aid program, the Rice Investment. However, Leebron said these changes were not yet acknowledged in this year’s rankings.

“The increased selectivity and the financial aid program would not be factored into this year’s rankings, to the extent they are relevant to the U.S. News rankings and it’s not clear they are,” Leebron said.