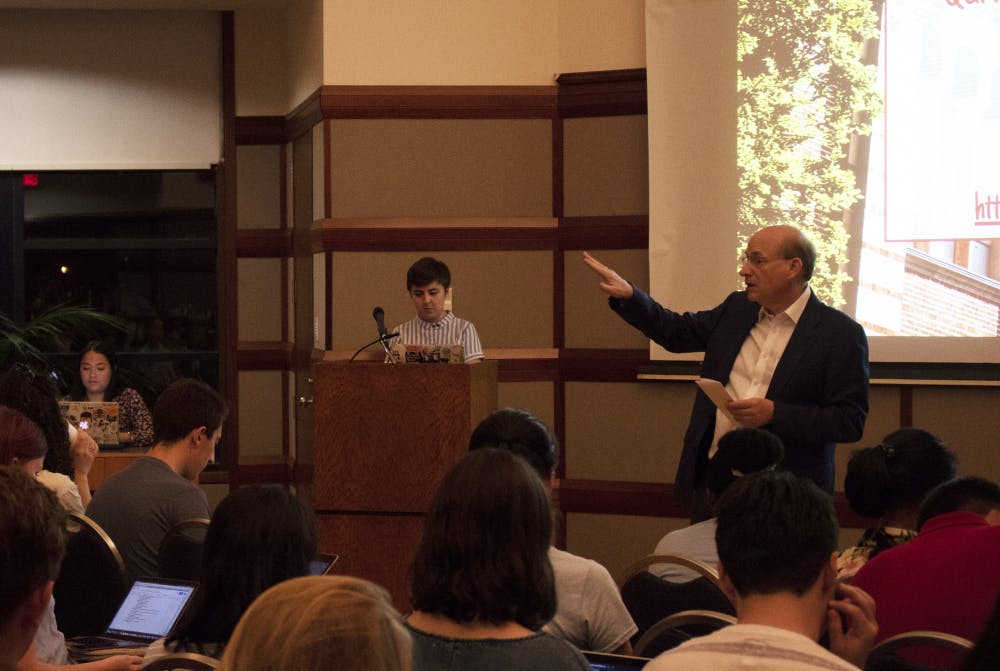 In an email sent out to the Rice community, President David Leebron and Interim Provost Seiichi Matsuda gave an update on the task force on slavery, segregation and racial injustice, including the expected budget, timline and the new co-chairs, professors Alexander X. Byrd and Caleb McDaniel.

“Both Professor Byrd and Professor McDaniel are historians and recognized experts on African American history and the history of American slavery,” Leebron and Matsuda wrote. “Professors Byrd and McDaniel will be working with us to appoint the membership of the task force within the next five or six weeks.”

Following this news, Leebron spoke to students at the Student Association Senate this past Monday, where he elaborated on the information in the email, then took audience and anonymous questions.

During the SA Senate meeting, Leebron said that the main purposes of the task force are historical analysis, creating conversation on campus and informing the university on the next steps.

“What’s important is the work initially is focused on the historical aspect,” Leebron said. “Once that work is complete, it’s up to the task force to organize it and to make suggestions about how we might move forward.”

Drew Carter, Jones College SA senator, said that he is concerned with ensuring the task force is effective and addresses current campus issues.

“I think the most important thing is ultimately we can reflect on our past and it’s really important that we bring to light some of the things that have been suppressed about Rice’s history,” Carter, a sophomore, said. “But there are a lot of students that need change now, there are a lot of Black students that really could use an outreaching arm, and I think this task force has the potential to do that. I’m more so challenging to make sure it does do that.”

In the recent email, Leebron and Matsuda wrote that the task force would release a preliminary report after two years.  During the SA Senate meeting, students asked about the reasoning behind this timeline, and in response, Leebron said that the two-year time period will give the task force enough time to perform research into Rice’s past.

Leebron said at the SA Senate meeting that the co-chairs were directly appointed by him, but that he consulted different people across campus and looked at the structure of task forces at other universities.

According to Leebron, Byrd and McDaniel will largely decide the structure of the task force. Leebron said he expects that the Rice community will be made aware of the composition of the task force, including which students were selected to be a part of it, in about a month.

“Once the task force has been appointed, we will make an announcement of its membership to the Rice community,” Leebron and Matsuda wrote. “The task force will function independently under the leadership of the co-chairs.”

In the email, Leebron and Matsuda wrote that they had already received feedback following the initial email announcing the creation of the task force.  At the meeting, Leebron said they kept all of this feedback and will make sure that Byrd and McDaniel receive all of it.

According to Grace Wickerson, SA president, Leebron reached out to them about speaking at the meeting in order to engage with the students there. Wickerson said they think the task force is a good step for the university to take following the discovery of racist images in the Campanile last semester.

“I personally feel like the goals are basically to spend a lot of time doing historical research, and I think that’s necessary because I know that there’s bits and pieces of racism in Rice’s history that we understand, but we don’t understand the full story or aren’t as open about the whole story,” Wickerson said.