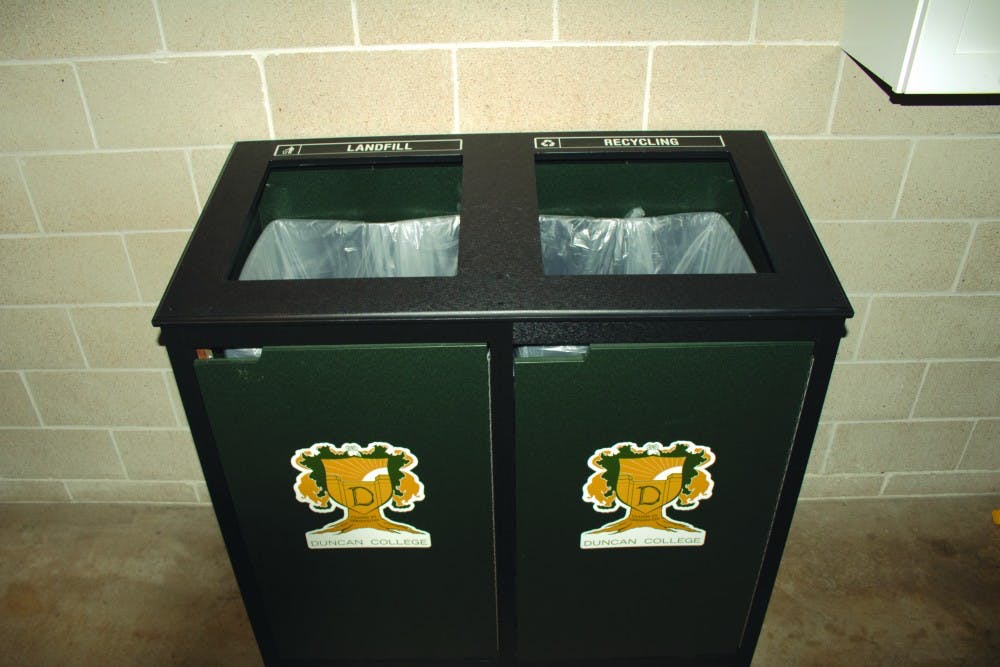 Housing & Dining has implemented a trash collection system in the South Colleges that requires students to remove their own trash from their rooms, expanding a system that was already in place in North Colleges, according to H&D’s operations directors Beth Leaver and Brad Thacker.

As a part of the new system, trash and recycling receptacles have been installed throughout every residential college, according to Thacker. H&D staff will no longer remove trash from students’ rooms, so students will now deposit their trash in college receptacles.

The goal of this new system, which will be rolled out in every building on campus in phases, is to raise Rice’s diversion rate, the percentage of waste diverted from landfill to recycling, to over 60%, according to Thacker.

“Campuswide, we're going through a lot of different changes as far as our trash policy,” Thacker said. “It's kind of something we're looking at globally. The amount of waste that we produce on campus is an enormous amount.”

According to Thacker, this system was piloted at Brown College in 2017 due to student initiative and collaboration with H&D.

“It was a huge success,” Thacker said. “I had no real pushback from the students at all.”

“I like the new system because it puts students in control of their waste,” Smith, a junior, said. “It might also spark interest in sustainability and reducing how much we use. As time passes, I think the system will feel more normal and just become a part of Rice life.”

Thacker said H&D implemented the system at the rest of the North Colleges last year after college presidents expressed support, and that the differences in floor plans and the ages of the buildings made it more difficult to implement in South Colleges than North Colleges.

Leaver said the system is still a work in progress, and H&D is determining the best places for the receptacles in the colleges.

“We're open to feedback from students,” Leaver said. “We're about to process a second order of receptacles because there's areas we realize that we need to add [receptacles] to.”

The new system also involves installing cabinets to store trash liners for students to access when they need to replenish their own liners. Currently, trash liners are replenished in the rooms by custodians, according to Leaver.

"Students now are at an age where they are interested in and really concerned by the amount of waste we're producing,” Thacker said. “And so the goal is to get away from liners. We've seen this work in the academic buildings.”

According to Thacker, Houston Waste Management now considers the blue liners, previously used in recycling bins, as contaminants, so H&D no longer uses these liners.

According to Richard Johnson, Director of Sustainability, blue liners are considered contaminants because of their opaque nature as recycling plant workers are not able to see into the bag to assess whether the bag contains contaminants.

“We're kinda just shifting things some because it’s a good time with students that are very conscious about things like this, but some of this is being driven by [Waste Management’s new policy],” Thacker said.

H&D has been working with student maintenance representatives to implement this new change and communicate within each college, according to Leaver.

Sarah Silberman, a Wiess College senior and head EcoRep, believes this new system will help students be aware of the waste they produce and possibly result in less waste overall.

“Oftentimes students wouldn't fill up their whole trash or recycling bins over the course of two to three days, yet the H&D policy was that it would be taken out regardless of how empty or full the bin was,” Silberman said. “Thus, with the new system, students are able to determine when their trash/recycling gets taken out and fewer liners are wasted.”