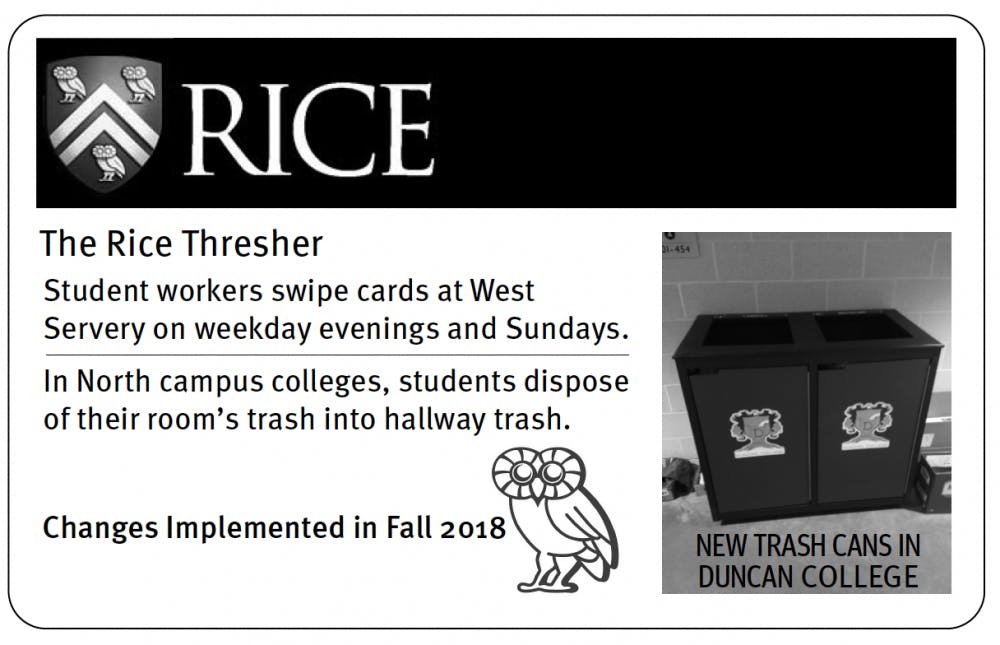 Rice Housing and Dining has instituted a new system of trash disposal in residential colleges on the north side of campus as well as beta testing of student swipers on evening shifts in West Servery, according to Housing and Dining Senior Business Director David McDonald.

According to McDonald, the new trash disposal system, currently in place at Brown, Duncan, Jones, Martel and McMurtry colleges, involves communal receptacles on each dorm floor. Students must dispose of the trash and recycling from their rooms in these receptacles, which are then taken out by Housing and Dining custodians.

Separate receptacles are in place for trash, general recycling and specialized recycling, according to Jones Student Maintenance Representative Josh Perez. Trash bags are also available at the end of the hallway for students to change their room trash bags, according to Brown College President Taylor Morin.

Housing and Dining ordered 62 receptacles for the North colleges, amounting to approximately 12 per college, according to McDonald.

The trash receptacles at all North campus colleges are currently in place. Martel received their trash cans most recently, on Sept. 6, according to Martel President Russell Kielawa.

Prior to this year, Housing and Dining custodians collected the trash from each room individually. According to McDonald, custodians found the amount of trash and recycling picked up on a daily basis to be difficult and time-consuming.

“It’s not really an environmental benefit,” McDonald said. “The volume [of trash] hasn’t changed. It’s an efficiency factor for our trash collection, to get it out of the building quicker.”

In the summer of 2017, Housing and Dining first piloted the communal trash disposal system at Brown College and received positive feedback, according to McDonald. The system has been in place at Brown ever since.

Morin, a senior, said Brown was selected for the pilot program because its students wanted to collaborate with H&D to implement the change.

“I think the system is great,” Morin said. “It is simple and didn’t take much getting used to, and it has significantly reduced the amount of unnecessary trash Brown produces. While every college is different, I imagine the other colleges will see similar benefits to what we’ve seen at Brown.”

According to Morin, the new disposal system reduces trash bag waste. In the old system, students would often leave trash cans out indefinitely, and custodians would replace trash bags regardless of the amount of trash inside, often needlessly.

Perez, a senior, said he thinks the biggest advantage of the new system is the lighter workload on H&D custodians.

“It never made sense for H&D staff to go from room to room replacing trash every single day, when there are more specific jobs that can be more useful,” Perez said.

According to McDonald, H&D will gather feedback on the program throughout the year and hope to start implementing the program next year in other colleges.

H&D is also currently beta testing student swipers at West Servery during weekday dinners and both meals on Sunday, according to an email sent from Duncan President Greg Van Kirk to the college.

“Cashiering positions are pretty difficult to staff,” McDonald said. “It’s much easier for us to hire people who are willing to do the work during the daytime. So we thought, we have a whole bunch of students that live here. What if they would be willing to manage the cashier stations at our critical times where we’re having a hard time staffing in the evenings?”

Previously, H&D had hired high school students to cover evening shifts, but the students had scheduling difficulties that conflicted with work, according to McDonald.

To provide an incentive to the colleges beta testing the program, H&D is providing Duncan and McMurtry each with a $5000 bonus to their ambiance funds in addition to the yearly $5000 given to each college by H&D to spend on improvements, according to McDonald. Currently, the two colleges are each projected to receive $10,000 this year in ambiance funds.

According to McDonald, a percentage of the additional money will be deducted if problems arise with how the colleges manage their programs. The primary problem he foresees potentially arising is cashiers not showing up to their shifts.

Elhadji Diop, the servery swiper manager for Duncan, said the program has been going smoothly so far.

“We have had little to no issues whatsoever,” Diop, a sophomore, said. “It is a very humble position where [swipers] are able to earn some cash while helping out H&D with their new initiative. The job itself is low stress, so that is a huge plus.”

After running the beta test and soliciting input, H&D plans on expanding the student swiper program to other serveries, according to McDonald.