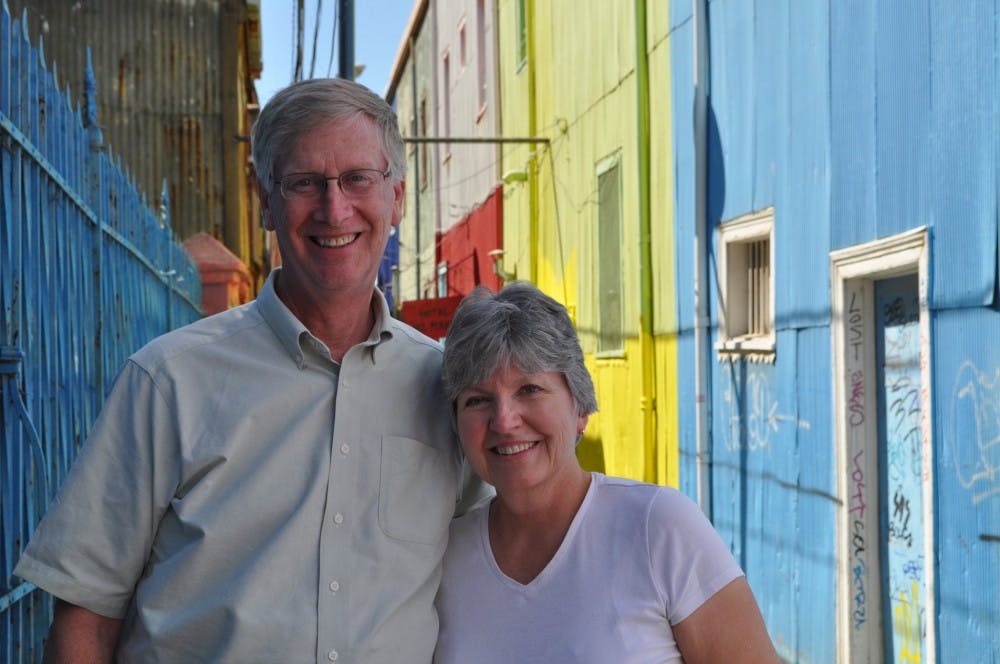 Lovett College saw plenty of new faces this school year, but not all the new kids on the block were students. August marked the beginning of Michael Gustin and Denise Klein's first school year as Lovett magisters, after being associates at the college for 18 years. They live with their shy black labrador Walter and enliven the new house by hosting Lovetteers for summer barbecues and "Bachelor in Paradise" watch events.

“We’ve always felt like the downstairs of the magisters’ house is an extension of the college, so we like to have students over as much as we can," Klein said.

Being a magister is an exciting but not entirely new experience, as they served in the same capacity at Wiess College roughly eight years ago. For their second term, they recognize that plenty has changed — including the title of the job to “magister” from “master” — and they’re more than willing to experiment.

“You know, this is not Wiess,” Gustin, a professor of biosciences, said. “This is a very different culture, so we’re also looking for ideas from students, what kind of events they would like to have.”

But the two also said they want to reignite some of their past traditions. Klein, a pharmaceutical professional, said that she’s looking forward to bringing back the tea parties they held while at Wiess. She said having the students over for tea or small groups dinners allows her to get to know them better.

“It takes me a little longer to know the students than it does [Gustin], because he memorizes names before they come,” Klein said. “But I have to talk to them, find out where they’re from, what their interests are, and that’s how I do it.”

Gustin said that a couple students have already approached him with passion pitches; his own ideas vary from inclusivity to a new bowling alley in the basement.

Gustin said that engagement occurs at every level, including in response to his pitch for a new bowling alley. Gustin said that he came up with the idea while Lovett President Chloe Oani was showing him around the basement, and it snowballed from there. According to Gustin, Beth Leaver, operations director from Housing and Dining, told him she overheard students in the Gibbs Recreation and Wellness Center talking about the potential Lovett bowling alley.

“In my own sort of creative process, I try to come up with peak experiences, slightly out of the ordinary things to do,” Gustin said. “Crazy, but good crazy.”

Last year, Hanszen College and Sid Richardson College were also both looking for new magisters. According to Klein, they felt a connection to Lovett after being associates there prior to their tenure at Wiess.

Gustin said he feels that Lovett is one of the most engaged colleges at Rice.

“A residential college [is] actually not exactly the best fit for everyone,” Gustin said. “There are some people who think, ‘It's a little too fishbowl-like to me. I don’t want people to know my business so much,’ or whatever. But having said that, as an overall average, there is a very high level of engagement with how the college works [here at Lovett].”

Klein and Gustin said that they believe that the president acts as the head of the college, not the magisters.

"We have a really strong president in Chloe Oani,” Gustin said. “To have such great leadership in college and to come into a situation where you’re warmly welcomed, you can’t ask for more.”

Klein said that she believes the high level of engagement among students is partly because of how the college government is structured.

“What we’re finding is that they have a committee for everything,” Klein said. “Which is great, because everyone's involved.”

Those committees range from social event coordinators to a committee dedicated to maintaining a pile of bananas in their commons. Gustin said that while the magisters are available to help advise and support students, it is the students themselves that drive the emergent culture.

“When you come in as a magister, there's no game plan, there's no manual,” Klein said. “You're experimenting. And when we got that concept down, we could figure out exactly how we could better support the college.