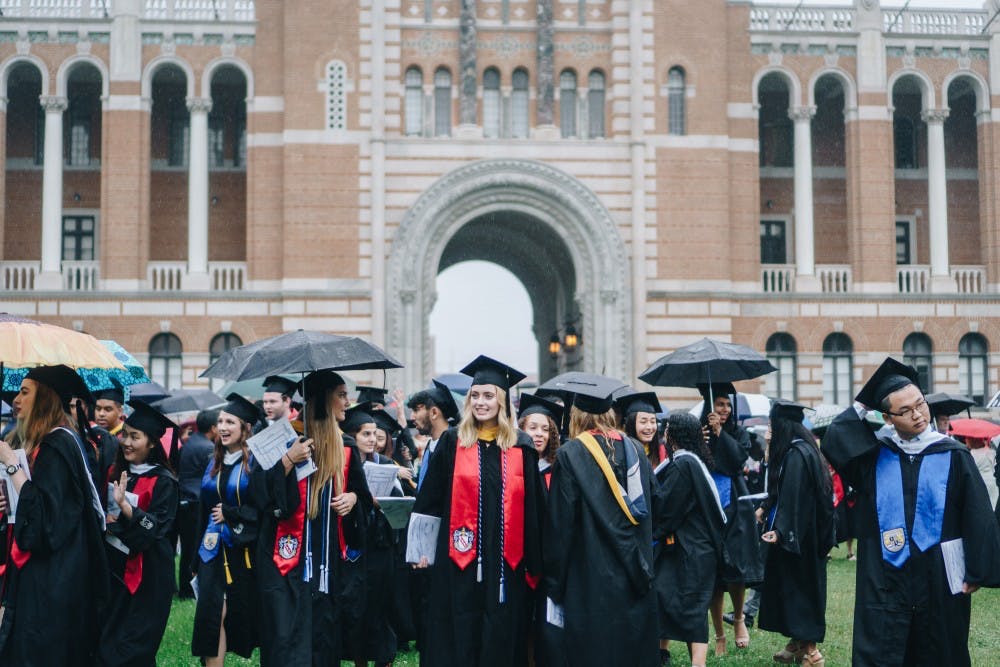 Photo by Christina Tan | The Rice Thresher
Baker College and Lovett College emerge from the Sallyport amidst rain.

Class of 2019 graduates came to Saturday morning’s commencement with their caps, gowns, stoles and umbrellas. Despite forecasted downpours and the proposed alternative venue of Tudor Fieldhouse, both Friday and Saturday ceremonies were held outside. Like their matriculation ceremony four years ago, the graduates saw rain fall as they were granted their degrees.

“You can’t be a leader just when it’s convenient,” Parker said. “But the most important lesson is that if you’re willing to try, you can find a connection to anyone. But you have to be willing to try. And unfortunately, it seems like fewer and fewer people are willing to try.”

Parker, who began her speech with “Jones wins again,” said that she remembered the excitement and fear she felt during her graduation and that those sentiments do not change over time.

Parker discussed her experience planning a LGBTQ pride celebration in the ‘80s. Tasked with turning on stadium lights at the right time for fireworks, Parker said she struggled to figure it out and had to ask the help of a nearby City of Houston electrician. After she revealed her identity as a LGBTQ member, Parker said that the electrician turned his back on her and almost left.

“He looked at me and he glared at me and he said, ‘I don’t approve of that lifestyle. I don’t like you, I don’t have to help you with this and I’m just going to go back and get in my truck,’” Parker said.

Parker said that only after she stated that she was a Democrat did the man, a union worker, help her. She used the anecdote to underline the importance of finding commonalities with people before assuming their stances and thoughts.

“You’re being called to leadership in a country that desperately needs it,” Parker said. “Merriam-Webster dictionary defines ‘to cleave’ as to adhere firmly and closely, or loyally and unwaveringly. Merriam-Webster dictionary also defines ‘to cleave’ as to separate into distinct parts and especially into groups having opposing views. ‘To cleave’ means both to join together and to split apart.”

Parker used Hurricane Harvey as an example of this duality, saying that disasters like Harvey bind people together while simultaneously dividing people into two groups, the lucky and the lost. She then extended this metaphor into current politics.

“We used to argue the meaning of facts, but now we argue the existence of fact,” Parker said. “We fear that the more we seek the promise of America, the less American we become.”

Midway through Parker’s speech, rain began to drizzle over the crowd and umbrellas popped up amongst visitors and graduates. After her speech, conferral of degrees was rushed as the rain picked up pace, culminating in heavy rain as the graduates walked through the Sallyport for the last time as students.

“When you leave today, the opportunities before you will be endless,” Engles, a Lovett College junior, said. “I encourage you, as you leave this institution we all call home, to consider what you really want out of your life after Rice and how you can apply what you’ve learned here to the world beyond.”

Friday’s evening convocation ceremony was held outside in the Academic quad in dry weather 30 minutes ahead of schedule. Student speaker Muna Uzodike, who was chosen by a committee of undergraduates and faculty advisors, spoke on the importance of staying true to yourself.

“We are a little strange, a little quirky, a little different,” Uzodike, a Martel College senior, said. “But you know what? God forbid that our university be like any other one out there. God forbid that any member of this graduating class be like anyone else and all be the same.”

Uzodike used the familiar O-Week experience of wearing the same shirt for a week as an example of building community while maintaining individuality.

“This is the difference between fitting in and belonging,” Uzodike said. “You should never have to defend your right to exist in your current state of being.”

Outgoing Hanszen College magister Paul Brace was scheduled to speak after Uzodike but did not. Uzodike was followed by president David Leebron, who referenced advice given during their matriculation ceremony and thanked Twitter for helping him pray for good weather.

“We need your knowledge, your skill, your creativity,” Leebron said. “But we also need your kindness, your compassion and your humanity. We hope in your journeys ahead, you will hold Rice values dear. These are to take responsibilities for yourselves and the problems and injustices that you see.”