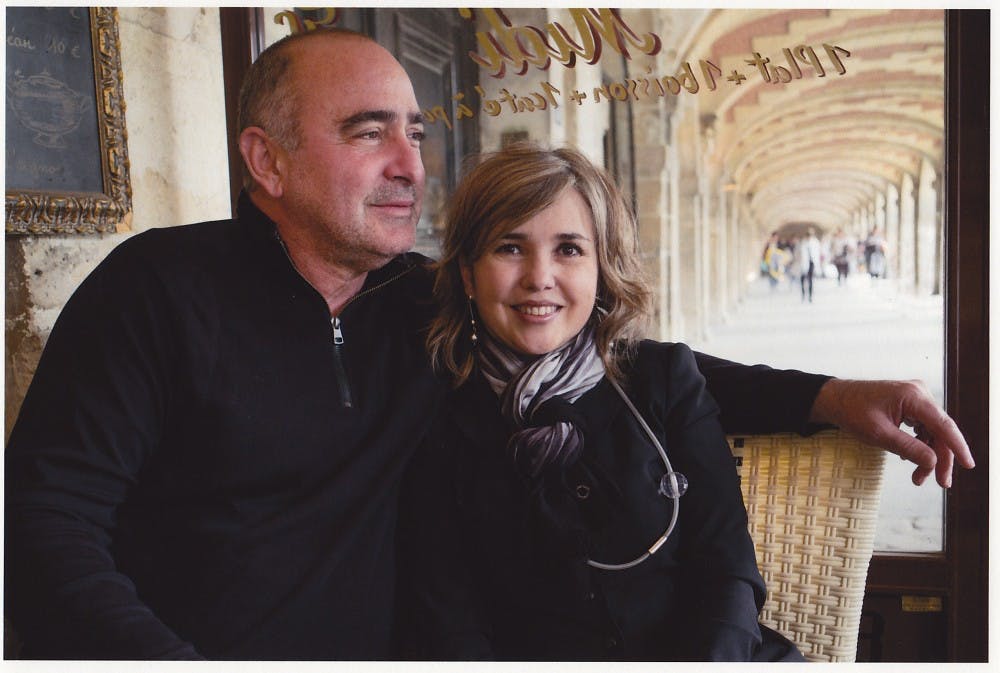 Hanszen College’s new magisters, Fabiola Lopez-Duran and Carlos Martinez-Rivera, are an adventurous couple. From their love of travel and the fact that they have lived in three different continents, it’s clear that they enjoy excitement in life. But many Rice students might not know their most adventurous choice — getting engaged only one week after they met.

“It was a shock for [Martinez-Rivera’s] entire family,” said Lopez-Duran.

Lopez-Duran met Martinez-Rivera through his cousin Simón, who she met while in graduate school in Italy. They were such good friends that she visited his hometown — Caracas, Venezuela — every chance she got. She actually met Simón’s entire family before she met Carlos. In fact, Lopez-Duran and Simón were so close that Lopez-Duran said Martinez-Rivera’s family expected her to marry him.

But about twenty-five years ago, while visiting Caracas for the festival Carnaval, the two ran into each other and immediately hit it off. They spent the next few days sneaking away from Martinez-Rivera’s family to spend time together.

Although their quick engagement mirrors that of many current celebrities, it was a shock to both of their families. Not only did they barely know each other, but Lopez-Duran said that she and Martinez-Rivera were also as different as could be. Martinez-Rivera was a “country man” who worked in fields, whereas Lopez-Duran was a city girl.

Although Lopez-Duran’s family was pleased that she was engaged after years of vowing she’d never get married, they were also hesitant about how little the couple knew about each other. But Lopez-Duran reassured them that marriage was the right move, telling her mom, “I’m having fun!”

“Every year for our anniversary, [my mother] calls me and she always asks, ‘Are you still having fun?’” Lopez-Duran said. “Which is so sweet.”

But a few years after getting married, they encountered a major obstacle: distance. After years of working, Lopez-Duran decided to pursue a doctorate in the history, theory and criticism of art and architecture at the Massachusetts Institute of Technology.

But Martinez-Rivera had to stay in Venezuela for his job, forcing them to commute between Caracas and Boston for four years. When Martinez-Rivera finally joined her in Boston, she had to leave to pursue opportunities in France and then the University of California, Berkeley.

Although difficult, Martinez-Rivera said this distance was more manageable because they were finally in the same country.

Finally, Martinez-Rivera and Lopez-Duran were reunited in Houston when Lopez-Duran became an art history professor at Rice. After facing the adventure of a long-distance marriage for so many years, they have decided to pursue a new adventure: being college magisters. Lopez-Duran, who was already teaching at Rice, said she applied because she wanted the chance to be part of the student experience outside of the classroom.

Martinez-Rivera, however, had slightly different reasons for wanting to apply. Although his wife formed an immediate connection with Rice through her job, his connection grew slowly. First, it was a place to play pick-up soccer with the neighbors. Then, he found work making and editing videos in Fondren Library’s Digital Media Commons. He began spending more and more time on campus until he found himself wanting a personal connection to the university.

“[Being] magister is perfect for me,” Martinez-Rivera said. “[It provides] a sense of belonging to Rice.”

Although Martinez-Rivera and Lopez-Duran applied to all three open magister positions — at Sid Richardson College, Lovett College and Hanszen — Martinez-Rivera said that he felt an instant connection to Hanszen. After talking to Madison Grimes, a Hanszen junior and the chair of Hanszen’s magister search committee, it clicked for Martinez-Rivera.

“I told Fabiola, ‘That’s the place,’” Martinez-Rivera said. “[It was] what we were looking for [and] exactly what we were thinking of.”

Both Martinez-Rivera and Lopez-Duran already have plans for their time as Hanszen magisters. Their main goal is to make Houston — especially its opportunities, diversity and culture — more accessible to Hanszen. They are excited about sharing photography, films and art with Hanszen students to emphasize the significance of humanities, something they both strongly believe in. Martinez-Rivera is particularly excited to share his experiences volunteering at the Red Cross for Hurricane Harvey and at incubator kitchens in San Francisco.

Lopez-Duran and Martinez-Rivera are looking forward to taking part in the residential college system, which they feel is an important and unique part of Rice. Unlike many universities, which organize dorms by fields of study, both believe that the diversity of Rice’s residential colleges motivates important ideas such as ethics and innovation.

“[Residential colleges foster] diversity in every single sense — not only in terms of race and gender, but also in terms of knowledge,” Lopez-Duran said.

If their goal is to encourage diversity at Hanszen, Lopez-Duran and Martinez-Rivera — who have lived in countless cities in at least three different continents — might just be the perfect couple to do so.