Studio, late nights and Netflix: The ARCHI experience at Rice 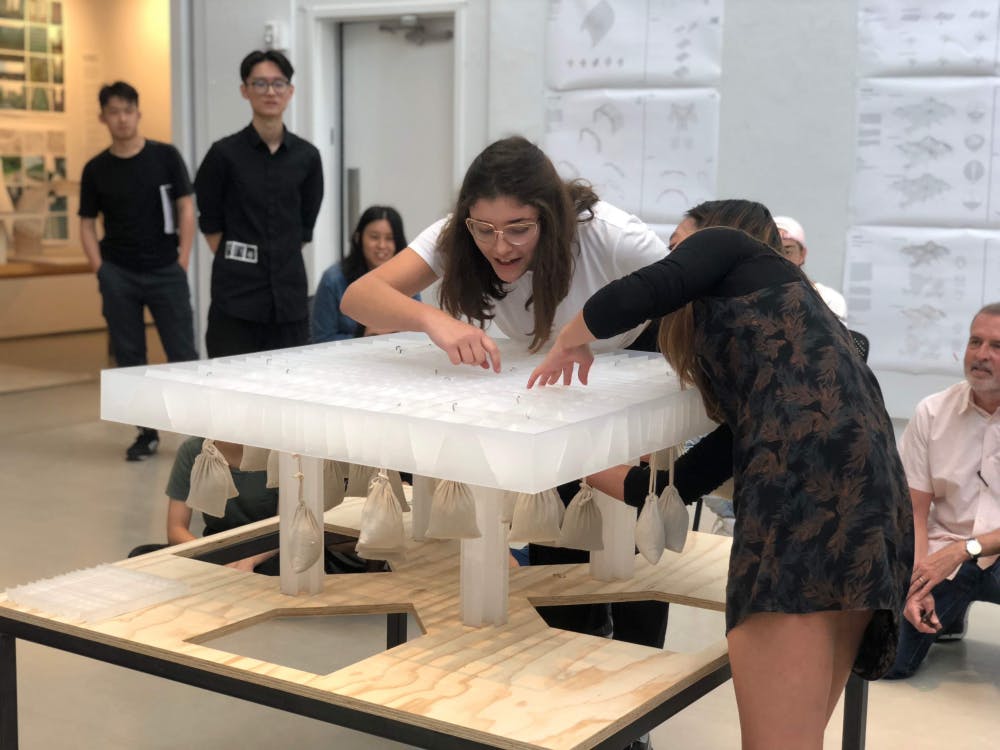 It’s hard to miss the bright red, orange and yellow seats that fill McMurtry’s commons. And McMurtry College freshman Dani Ennis hates them. If she had designed her college’s central space, she would have done it differently. While she likes the open space and the natural light, she’d prefer if the chairs were purple — still eye-catching, but they’d show off McMurtry’s color.

“I think [the chairs] could be a funky color,” Ennis said. “But not three colors at the same time.”

It should come as no surprise that Ennis is studying architecture.

The Rice School of Architecture is one of the top architecture programs in the country. Prospective students apply directly to the architecture school, and each class has roughly twenty students. What makes Rice’s program unique is that it is a six-year program. According to Beril Üzmen, a Jones College junior, architecture students graduate with their matriculating class, leave Rice to do a year-long preceptorship — similar to an internship, but at an architecture firm — and then return for a final year. Preceptorships helps the students decide what area of architecture to pursue.

While Ennis is interested in interiors, there are a variety of careers open to architecture students. Üzmen said that she knows architects in landscaping, interior design, business, project management, and even law. According to Ennis, architects designing a building can choose the furniture and even dinnerware used in their space.

“Even when you think about Hogwarts in Harry Potter, [it] was designed by architects,” Üzmen said.

For the architects who design buildings, many focus on the user experience, according to Ennis. For example, she said that she thinks Duncan Hall is all about the user’s experience because the inside of the building is so unexpected when you first walk in.

“You cannot be mad in that building,” Ennis said, although engineering majors may disagree.

This variety of career opportunities could be why many ARCHis still have questions about their future. Even though Üzmen is in her third year of the program, she’s not quite sure what kind of architecture she wants to do.

Being a student in one of the country’s best architecture programs can be challenging. Ennis specifically remembers how terrified she was when she received her first architecture assignment.

“I read it like five times and I didn’t know what they were asking,” Ennis said. “Nobody knew. But then I looked around and all of my friends now, in architecture, didn’t know what was happening either.”

Ennis said she also struggles with how time consuming her projects can be.

“With writing an essay, you don’t know what you’re writing, but then you just keep on writing and you get somewhere with it,” Ennis said. “With architecture, you spend seven to eight hours on something and then you look at it and it looks terrible. But you don’t have time to go back and fix it, so you have to find a way to fit it into your project.”

Ennis said her favorite project has been the hybrid house — an assignment where she was asked to put together the designs of two houses she had designed earlier in the year. But in the process of designing it, she didn’t follow all of the rules.

Every architecture student can take an array of classes — history of theory and technology, for example — but the one class that every architecture student has to take every semester is studio. Studio is from 1 to 5 p.m. on Mondays, Wednesdays and Fridays, and it’s where students develop a semester-long project. Üzmen said she’s designed a house, a winery and a television studio among other projects. Each year, studio focuses on a different aspect of design. For example, Üzmen said students focus on technology during junior year and urbanism during senior year.

Although ARCHis have different kinds of projects than most students at Rice, one thing they have in common with other students is that they love to watch Netflix while doing work. Üzmen said that she often catches up on TV while making models — 3D objects that represent designs. But Netflix doesn’t just serve as a way to pass time — Üzmen said it’s a bonding experience for ARCHis.

“[My studio] watched like half of ‘Friends’ together while we [made] models,” Üzmen said.

In particular, studios grow close because of the amount of time they spend together. Although they usually work on individual projects, they spend so much time working in the same room that they’ve formed a close bond.

“As a group we vibe very well,” Üzmen said. “There are so many things that we have inside jokes and talk to each other about. Like, it’s [three] in the morning, but you’re still able to laugh with these people.”

Faculty support and involvement is one of the defining features of the Rice architecture experience. The students are clearly close to their professors — they call their professors by their first names, and in the architecture school’s biweekly publications, they have a section called “Memes with Michelle,” where they document Professor Michelle Chang’s reactions to memes. Üzmen said that Dean Whiting, the dean of the architecture school, has group meetings with the entire school that are “like mom giving us advice.”

Another integral part of the community is the architecture school’s student government, called Society. Society has a president, two vice presidents—one for undergraduates and one for graduates—along with a secretary, treasurer, and curators and cruise directors, who organize events such as Architectronica. They also have merch coords, who coordinate the architecture school’s very own merchandise.

Although the architecture school has their own close-knit community, that sometimes makes the architecture students feel somewhat isolated at Rice, according to Üzmen. It’s mostly in the small activities that they miss because of architecture commitments. For example, because they have their required studio classes, Üzmen sometimes misses out on activities like Fridays in the Quad at Jones, her residential college. One of the Jones RAs had a birthday party for her dog Bruin from three to five p.m. one day, but Üzmen couldn’t make it because of studio class.

But ultimately, Üzmen said she enjoys being involved in the Jones and Rice communities. She said she wanted to advise during O-Week so that she could take part in an experience that is important to Rice’s culture.

“Being part of O-Week kind of made me realize how much I love being in Jones,” Üzmen said.