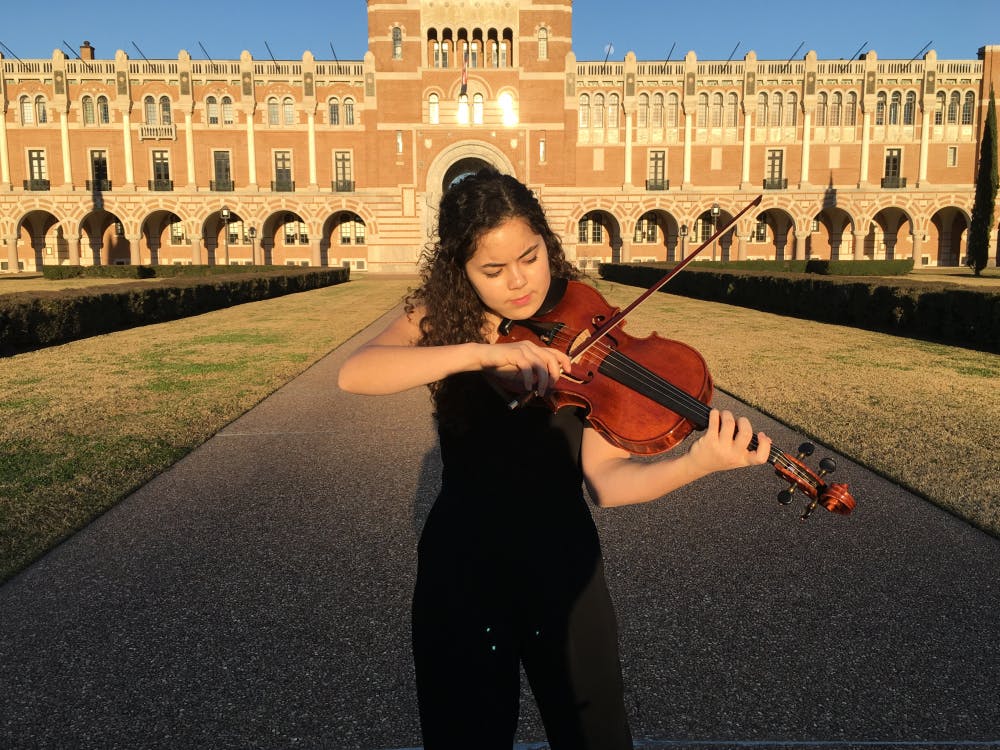 Even though it’s only been five weeks, freshman violist Lauren Ross has made herself at home at Shepherd — she’s already taken many naps on the black couches in the lobby, which she claims is the best napping spot in all of Rice. It’s easy to see that she’s comfortable at Shepherd by the way she stakes out practice rooms, which have windows that overlook the Skyspace on one side. As she pushes through the glass doors that look more like windows to enter Shepherd’s courtyard, she looks so at home that it’s hard to imagine her anywhere else. But one year ago, Ross wasn’t even sure she would pursue music at all.

Ross has been involved in music since she was 4 years old but only realized she wanted to pursue music in college the summer before her senior year of high school. She’d been playing the violin her whole life, but when she found out about an opportunity to play viola at a summer music bootcamp, she took it. After that camp, Ross decided to apply to conservatories — schools with higher education for music — to study viola.

Her decision came unusually late. Music students apply to conservatories in the fall of their senior year, and according to Ross, some musicians spend up to a year preparing their audition music — she spent only two months on the process.

Even so, she didn’t find it scary to decide so late in the game.

“It was kind of a whirlwind,” Ross said of the application process. “But I didn’t have time to think about it and be scared about it.”

That whirlwind of applications was what landed her at Rice. As a Shepherd student, Ross has 11 credit hours of classes aimed at training her in the skills she needs to be a musician. In her aural skills class, Ross and other students in their first four semesters at Shepherd learn to train their ears by performing a variety of sight-singing and interval exercises. In Ross’s studio class, a few students perform each week for the other violists and their teacher, who listen and give feedback.

Her schedule is packed with different music classes during the week. In addition to aural skills, Ross has music theory and orchestra rehearsals on Mondays, Wednesdays and Fridays. On Tuesdays and Thursdays, she has either technique class or studio class. Additionally, during the week, she has one private lesson, one chamber coaching lesson and two to three chamber group rehearsals, where Ross rehearses pieces with a small group of string players.

But studying music isn’t just about classes. When they’re not in class, MUSIs are practicing. Anytime during the day — in the morning while eating Mini Wheats, during a spare hour between classes, or after dinner — Shepherd students can be found scouting out practice rooms, which Ross said are limited but vital to practicing. Ross said she practices about three to four hours per day, but sometimes up to five depending on how much she has going on.

Music, like any other discipline, has its challenges. Ross said the most difficult moments come when she’s practicing but not making progress.

“Getting in those situations can be really tough because you feel really hopeless,” Ross said. “Music is such a hard path to go down that I, at least, wonder, ‘Was this the right path to choose?’ It’s really hard to have faith in it, even though I love it so much.”

Because of these difficulties and because she only decided she wanted to pursue music one year ago, Ross said she would be interested in double-majoring. Both of her parents are professors, so academics have always been a central part of her life. She’s not sure whether she’d want to study economics or something else, but as a music major, she doesn’t have the liberty to take a variety of classes before she decides.

“I still think music is what I want to do, but I want to take a lot of academic classes to make sure that that part of my brain is still working,” Ross said.

Ultimately, it’s clear that Ross is passionate about being a student at Shepherd.

“I love being part of ensembles, I love playing with people and I love being a part of something and making music,” Ross said.

For someone who discovered her passion so recently, she sounds pretty certain.