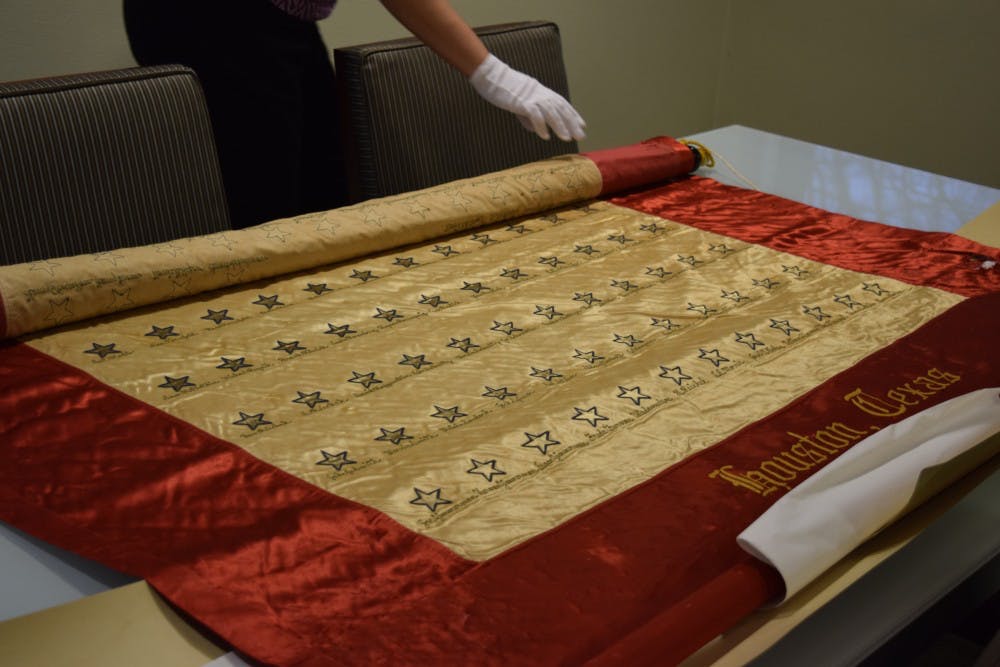 This 9-foot long banner from 1942 contains the names of more than 200 Jewish men and women who fought in World War II. It came to the archive from storage in a garage in Southwest Houston.

Tucked in the corner of Fondren Library’s first floor is the newly created Houston Jewish History Archive, housed in the Woodson Research Center. The archive will officially launch on July 1, but some pieces, like a banner from Beth Jacob Synagogue and Houston Hillel yearbooks, are already available for viewing.

“Jewish history here [in Houston] was literally being washed away and thrown out,” Furman said.

If they hadn’t preserved it, much of the material would be lost. After Harvey, the pair went to United Orthodox Synagogue, which took in six feet of water. Their storage closet had meeting minutes from the 1930s, membership directories, cemetery maps and other irreplaceable objects, which they were able to bring back to Rice for preservation.

The Houston Jewish History Archive began collecting pieces and articles in September 2017. It is a collaboration between the Woodson Research Center, the Rice Jewish Studies Department and several Jewish institutions in the Houston area. The archive’s purpose is partly for collecting documents, but it will also be collecting oral histories from Houston Jewish community members.

According to Furman, the idea to start the archive came to him when he was asked to give a talk about Jewish history in Houston at the Jewish Community Center in 2015. As he researched for the event, he realized that there weren’t very many records of Houston’s Jewish history, and that there was no central repository containing those records.

Furman said that the idea for the archive originated with a conversation he had with Jewish Studies program director Matthias Heinze.

“We thought about the issues and how Rice could contribute in a way that would fill that vacuum,” Furman said.

According to Furman, materials related to Houston Jewish history and life have not been centrally gathered nor written about to any great extent before now.

This upcoming fall, Furman will be offering a course, JWST 325: Jewish Houston, which shall “emphasize archival research and historical methods, and [give] student the opportunity to work in the archives and use records and photographs that no one has ever used before,” according to Furman.

In addition to the course, the archive hopes to work with students to complete oral history projects and interview members of the Houston Jewish community.

Ariel Feldman, a Lovett college sophomore, said that it was odd that Houston has never had a Jewish archive before. “The Houston Jewish Community isn’t small, and it’s history is pretty rich,” Feldman said. “In my time at Rice I’ve been to a lot of Jewish cultural events that have been put on not through Rice but by the greater Houston Jewish community. I’m excited to see Rice taking an initiative in making my own history more accessible to me.”

Daniel Cohen, a Will Rice college sophomore and next year’s Jewish Studies Student Association and Houston Hillel president, grew up in the Northeast. Much of the Jewish history he’s learned has focused on Jewish communities in the North.

“What’s wonderful about the Jewish History Archive is that it provides a lens into lesser known narratives of American Jewish communities,” Cohen said. “Stories concerning Southern Jewry are often forgotten or ignored, but this project is a testament to the fact that there is rich and compelling Jewish history in the South, too."

The archive has been able to acquire some significant collections since it started. The archive has records from Houston Hillel, the Evelyn Rubenstein Jewish Community Center of Houston, rabbinic sermon, and records from the Jewish Federation of Houston during the Holocaust that talk about the committees that organized aid to refugees.

On April 11 from 3 to 5 p.m., the Houston Jewish History Archive will be having an open house within the Woodson Archive, found on the first floor of Fondren Library.