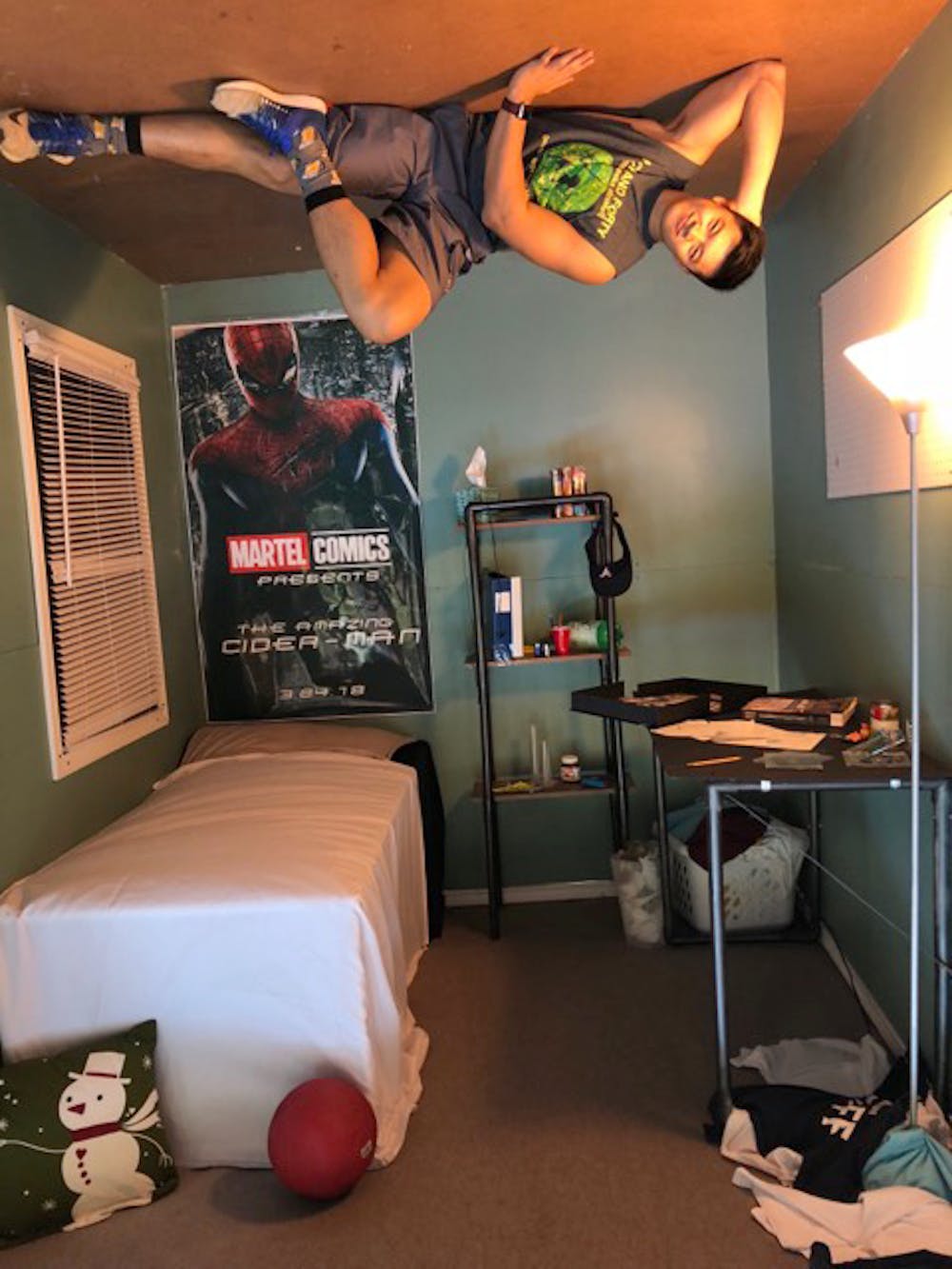 Students can snap a photo on the ceiling of Peter Parker’s bedroom and dance on a sundeck transformed into a cityscape through the Martel build inspired by the colleges “Martel Comics Presents: The Amazing Cider-Man” Beer Bike theme.

Gigi Rill, a head builder for the Martel build, said the smaller pieces around Martel as opposed to the typical one larger build on the sundeck is a result of trying new styles and the fast turnaround required by Willy Week falling right after Spring Break.

Rill said she was hard at work painting the cityscape mural for the last three weeks and finished the mural, which will hang from the sundeck, in a 12-hour painting marathon Sunday after returning from spring break.

But Rill’s favorite part of the build is Peter Parker’s upside-down bedroom, which she said will provide the best photo opportunity for those students in search of the coveted Beer Bike profile pic.

“The idea is that you pose as Spider-Man for the photo then flip the photo upside down and it looks like you are walking on the ceiling,” Rill said. “It’s going to be awesome.”

Head builder Jonathan Bunt said he and head builder Amanda Suarez dedicated many hours each week for the last three months to make the room a reality.

“This year’s build is a lot more detail oriented and decorational than any of the previous years,” Bunt, a Martel sophomore, said. “We decided to focus more on each unique detail of the city scape and room, even if it meant making a smaller build than last year’s.”

Suarez, a Martel freshman, said said work on the build began with planning in mid-January and Home Depot trips in February. The total build has taken about 350 man hours, slightly less than the typical about 400 man hours because of less wood construction, according to Rill.

Rill said the typical build budget can range from $1500 to $2500, but this year’s budget will be slightly cheaper as she has designed the build to use up stored material from past builds.

Previous Martel builds have included transforming the sundeck into a castle with a beer bottle throne and a beer can dragon for the college’s 2016 “Game of Patrons” theme and reacration of Rick’s garage for Martel’s 2017 “Rick and Forty” theme.

Rill said she has developed a process that includes pulling key items from the source material inspiring the theme and consulting Pinterest, particularly over-the-top birthday parties.

“I’ve developed a process of brainstorming where everything is on the table until it becomes obvious that it’s not realistic,” Rill said. “This year with the theme of Spiderman I was looking into covering the entire Martel Quad with a spider web across the 4th floor. This got revised to a spider web hanging in the commons.”

Ril said she has been involved with the build every year of her Rice career.

“It’s developed into a passion project that I enjoy tackling every year,” Rill said. “I did set design and backstage construction in high school so this is a way I can channel my creativity in a way everyone can enjoy.”