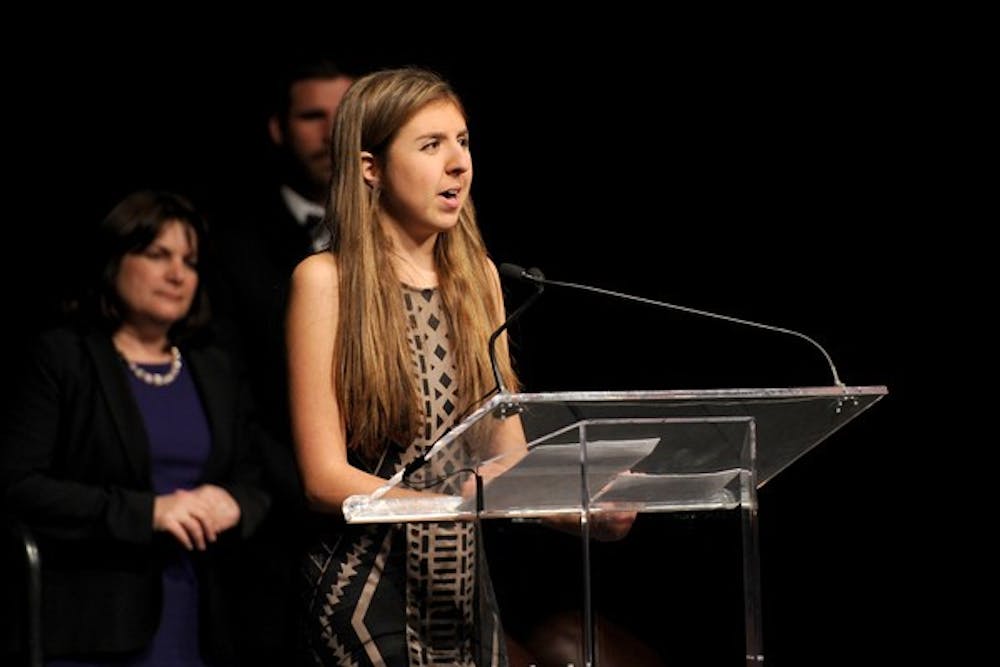 Grace Wickerson is a vegan-cookie-baking taekwondo black belt who is using her powers for good.

At only 19, she is the founder and CEO of a national nonprofit advocating nonviolence and co-founder of a startup that aims to serve. She’s also a full-time college student majoring in materials science and nanoengineering.

“I'm an idea person,” Wickerson, a Brown College sophomore said. “I like to think of things and how can I make them happen. Whether it's building things in a physical sense or building ideas out on paper, I think that's where I get really excited.”

Wickerson’s nonprofit, Kickin’ Violence, engages young people across the country in nonviolence advocacy through education and martial arts. This year, she was named one of Her Campus’ 22 Under 22 Most Inspiring College Women for her organization, which began as her Girl Scout Gold Award project.

“Why martial arts?” Wickerson said. “It's about being proactive to end any violent confrontation before it can even become violent as well as being respectful and peaceful and just.”

For her Gold Award, Wickerson created an anti-violence group and class taught by a local domestic violence shelter at her high school, which had no required curriculum about relationship violence. But her efforts didn’t end with her award. Since then, she has partnered with two school districts totaling at least 30 schools to start nonviolence student groups, and has created her own free curriculum to give young people the tools to build nonviolence education programs at their own schools.

“As a queer person, I've included a lot more education about queer issues, how do you deal with an added layer of power and control when someone you're dating could out you,” Wickerson said. “In the U.S. we don't have a lot of organizations that do queer domestic violence.”

With the help of the Jefferson Awards Foundation, Kickin’ Violence has also made over 80,000 survivor kits worth over $1 million. Survivor packs come with full-sized toiletries, journals for thoughts and handwritten notes from students.

“There's someone out there who cares about you and you might not know who they are, but there's someone who is thinking about you and thinking that you add value,” Wickerson said. “Because [in] a lot of unhealthy relationships, the key way is they make you feel like you're not valuable.”

Wickerson is working to bring her nonprofit to Rice by training students to engage with Houston schools and youth organizations and create survivor packs.

“It has been wonderful to work with someone so dedicated to her personal and professional mission,” Allison Vogt, who works in Rice’s Title IX office, said.

On top of running a national nonprofit, Wickerson is also the co-founder of Solver Labs, a startup which aims to equalize the job market through a hiring platform that focuses not on resumes, but on a person’s portfolio of work.

So far, Wickerson and her team have interviewed over a thousand hiring managers to create their platform, which they hope to make free for Rice professors who incorporate project-based learning into their classes.

“Grace often seems superhuman,” co-founder of Solver Labs Phil Hedayatnia said. “She has a genuine passion for everything she does and a gift to work collaboratively with people.”

One of the biggest challenges, Wickerson said, is having her work taken seriously as a young person. A word she never likes to hear describe her work: cute.

“I don't want to be knocked down a peg because [some adults] are incapable of thinking young people can have any sort of impact,” Wickerson said. “Once they hear your age, they can devalue you in a way.”

Wickerson spent this past weekend flying across the country to San Francisco to attend a conference for her startup. Though she rubs the tiredness out of her eyes, she comes alive talking about her goal of working in emerging technologies and her love of vegan food.

“I'm like the token vegan of Brown,” Wickerson said. “When people are like, 'Man, I wonder what's vegan,' they text me like, 'Hey Grace, is this vegan?" I'm like, 'Indeed.' I cook a lot. I make these bomb-ass vegan chocolate chip cookies.”

Janice Jean, Wickerson’s roommate and fellow vegan, confirmed the cookies are, in fact, delicious, as was the Thanksgiving meal the two cooked together when Jean spent the holiday with Wickerson’s family in Florida.

“I love how she makes it so I feel at home,” Jean said.

Whether it’s eating vegan or working to bring her nonprofit to Rice, Wickerson said the most important thing is to focus on why she is doing something rather than what she is doing.

Her current why: providing equal opportunities for everyone. It is a why she achieves through flying across the country for her startup, sharing her love for martial arts, and maybe, she jokes, by increasing the availability of vegan-chocolate chip cookies.

“It's a much different mindset because all the way along, no matter what boxes you're checking to get there, you always have an answer for [what your purpose is],” Wickerson said.