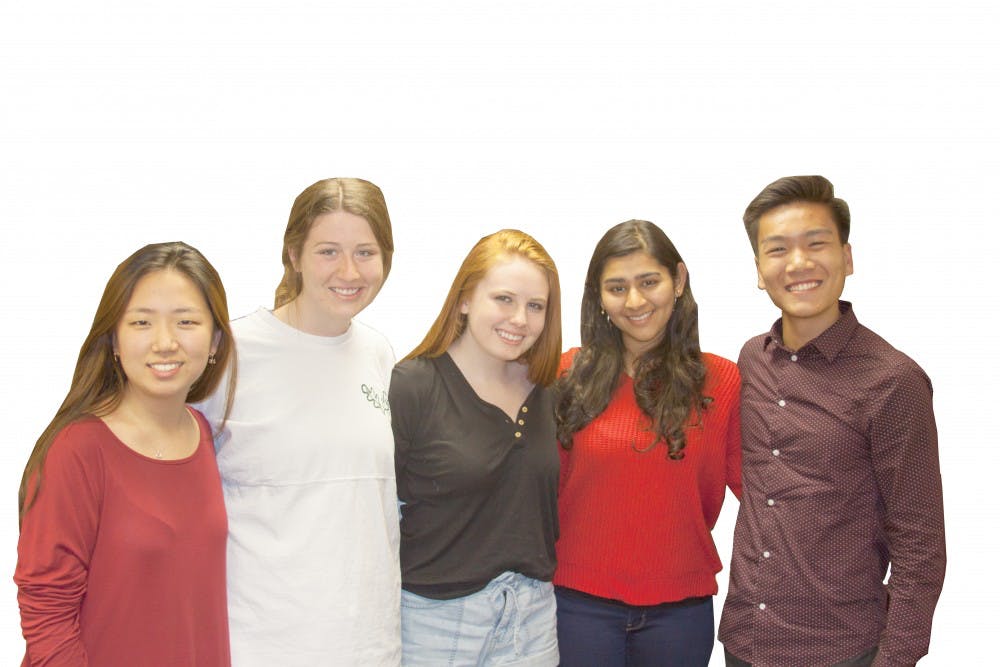 From left to right: Hannah Kim, Kate Landry, Madison Miller, Nikhita Gangla, and Jefferson Ren. Gangla, not quoted, is a Hanszen College freshman who switched with Kate Landry to stay at Baker College for the program.

Jefferson Ren made it his personal goal to spend a night at all the residential colleges this semester. Starting in October, he stayed at a different residential college for a night each week, moving in founding order. Last week he checked off another college, Sid Richardson, from his bucket list as part of the Student Association New Student Representatives Ambassador Program.

“In my [religious studies] class, we learned that the best way to see your culture is from the outside and I definitely felt that was true given my switch experience,” Ren, a Jones College freshman, said. “I learned to appreciate the nice balcony views of Sid and their version of floor culture but also gain[ed] a deeper understanding and appreciation for the amount of enthusiasm Jonesians put into their local government and Jones-wide activities.”

New Student Representatives switched places with other NSRs after dinner on Tuesday Nov. 14. They attended cabinet meetings and participated in the social life of their temporary college as much as possible during the program’s three-day period. Most NSRs stay overnight, but some only made a day switch.

Ren said the experience helped him appreciate the perspectives of students at other residential colleges.

“I've learned about how the architecture influences how people spend time with each other and now have a deeper understanding of how my friends view their residential colleges,” Ren said.

“Sid was different in that the floors didn’t feel as well-connected as the ones [in] Jones,” Ren said. “As for the latter, getting from one place to another is really convenient but Sid’s elevators made it seem like each floor was kind of its own place.”

Ren experienced Sid with fellow Jones NSR Hannah Kim. She said Jones and Sid had many similarities, including floor lobbies, but liked finding details that made Sid stand out, like not sharing a servery with another college. She met a number of people from Sid, but they weren’t always sure whether she was a Sidizen herself.

“I think the funniest thing about switching is that most people will have a feeling you’re not from their college, but they don’t want to ask in case you are, so they have a double take moment or a weird, restrained look of wanting to ask,” she said. “I was never surprised when they finally asked, ‘I’m sorry, but are you guys from Sid?’”

Kim thinks the Ambassador Program gives NSRs the chance to be exposed to other colleges’ “government, traditions, people and social life.”

“Too often, we tend to forget there are other colleges beyond our own, so it’s a great opportunity to explore,” Kim said.

Ren and Kim’s counterpart at Jones was Madison Morris, a Sid Richardson freshman. She spent a “decent amount of time” at Jones prior to the Ambassador Program because she has a few friends at the college. Still, she got lost inside of Jones multiple times.

Like Ren, the contrast between Sid Rich and Jones helped Morris see her home college in a new light.

For Morris, the Ambassador Program is an opportunity to participate in a different residential college experience.

“As a freshman, your college’s culture is so ingrained into you during O-Week that usually we just stick to our college or don’t bother learning about [or] experiencing other college’s cultures,” she said. “With this program, freshmen are able to get past comfort zones and live in another part of campus that is very different than what they are used to. [It is] a great way to meet new people and see different aspects of Rice we normally wouldn’t.”

“My experience was a lot less glamorous than I imagined, because school work prevailed, so I was just working in a different location,” Landry said.

She also noticed that Hanszen and Baker don’t use their commons in the same way.

“At Baker, there are always people in the commons, working, socializing, eating, you name it,” she said. “But at Hanszen, the commons are most lively at meal times.” The difference made her appreciate the strength of Baker’s commons culture.

Landry said her perceptions of the residential college system as a prospective student were very different from reality.

“Before coming to Rice, I thought people stuck to their college and rarely had substantial interactions between colleges,” Landry said. “However, since being at Rice I have learned that this is not at all true and that many people have some of their closest friends at other colleges and that there [are] a lot of connections between colleges. The campus is not as divided as I originally thought it might be.”