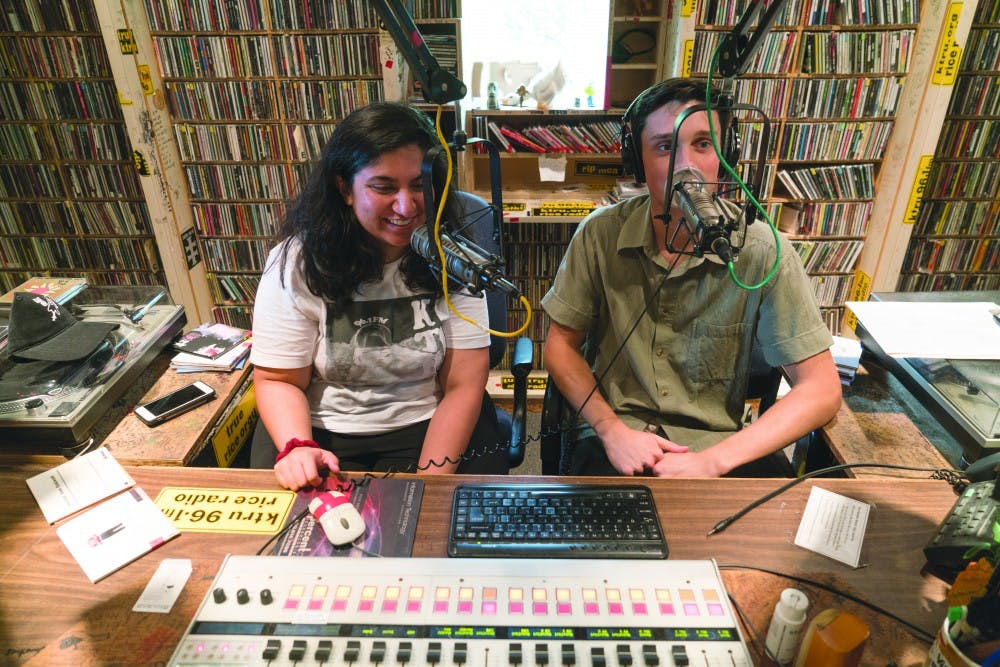 If you’re ever craving the croak of a frog, tune into KTRU.

“Last week, I was looking through the stacks and found a Smithsonian recording of 92 different North American frogs, so I played a frog call,” Chris Brehm, KTRU DJ and Baker College senior, said.

KTRU (officially named KBLT-LP) is Rice’s student-run radio, broadcasting 24 hours a day on 96.1 FM from their intimate sticker-covered studio on the second level of the Ley Student Center. DJs consist primarily of undergraduate students, although there is some graduate and community involvement.

Frog calls are not too out of the ordinary for KTRU, whose physical music library is comprised of thousands of CDs and albums dating back to 1967 when the station was first founded.

For KTRU DJ director Pharson Chalermkraivuth, this rich library is a vehicle for developing his own musical taste.

“Picking out a random CD from the stacks to queue up is a fun way to discover great music,” Chalermkraivuth, a Baker senior, said. “The wealth of material in the station means that you can delve deeper into pretty much any genre you want to.”

“It’s especially satisfying when you play a random song and realize, ‘Wow, this is a really cool song!’” she said.

Canavosio, in her first semester as a DJ, decided to get involved with the station after hearing about it during Owl Days.

“I immediately liked the culture of the radio station, and the people that are involved with it are really interesting,” she said. “They’re different than the average student.”

For station manager George Barrow, the DJ community is the best part of KTRU.

“It’s a community where it is okay to make mistakes, and raw creativity and passion are central and celebrated above all else,” Barrow, a Sid Richardson College senior, said.

He cites this community for introducing him to some of his best friends at Rice, and for providing him with great memories, among which he cites last spring’s KTRU Outdoor Show that featured Jamila Woods and Saba, and various instances of inspiring friends to join the DJ community.

Then there are the moments Barrow shares with no one but those tuned into 96.1 FM. “There was also the time that I played trombone for the very first time, directly into a microphone, broadcasting live on FM at 2 a.m.”

A major component of the station’s mission, according to their website, is to play music that typically goes underplayed on the mainstream radio.

“We want to let people know that good music doesn’t only come in electric guitar,” the website states.

KTRU’s music selection is broken down into various categories. These include “playlist tracks,” a collection of around 60 albums that emphasize unique and innovative music, “guilty pleasures,” songs that are more mainstream (by KTRU standards), and “local music,” which includes independent Texas artists.

Radio programs are divided into general shifts and speciality shows.

During a general shift, DJs must abide by certain requirements pertaining the track categories. These rules include a minimum of three playlist tracks per hour plus one per shift, one local track per hour, and no more than one guilty pleasure track per shift. Two “alternate tracks,” which include reggae, jazz and modern classical among other alternative genres, are required per hour. All music must come from KTRU’s physical collection of CDs and records, and DJs are expected to play a variety of music.

DJs looking for more autonomy in the music play for specialty shows, which focus on one genre. Specialty show DJs are allowed to play music from outside KTRU’s collection and on digital sources, and do not have to meet the track requirements. The KTRU board is working on loosening restrictions for specialty shows, because there haven’t been many new shows pitched in recent years, according to Barrow.

“The fact that they scold mainstream music so much when music is just music, that’s not really cool,” Ton, a Baker freshman, said.

Despite this, Ton cites the hours she spends in the KTRU studio as some of her most rewarding.

“It’s such a creative outlet. In no way do I see it as a resume boosting type thing, which is cool because in high school that’s all I did,” she said. “KTRU is an extracurricular activity that I do for fun, that I actually enjoy, and it genuinely makes me happier.”