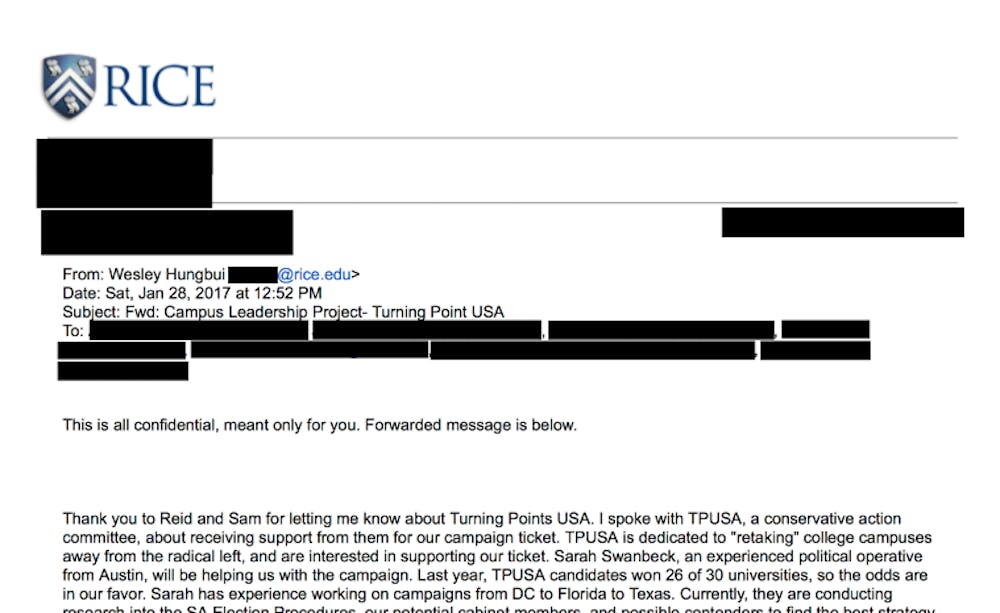 The Student Association Senate amended the regulations for the upcoming SA elections to bar candidates from promising student funding to organizations and from receiving campaign donations from groups unaffiliated with Rice. These new rules, which were approved unanimously at Monday’s Senate meeting, came in response to information indicating that a potential candidate or candidates had used external campaign consulting services and promised clubs preferential access to student funding in exchange for campaign assistance, according to SA President Griffin Thomas.

The Thresher obtained emails indicating McMurtry College junior Wesley Hungbui received campaign consulting from Turning Point USA, a nonprofit organization that aims to elect conservative candidates to university student leadership positions. Hungbui had reached out to multiple individuals attempting to create a ticket of candidates for several SA Executive Committee positions, but said as of Tuesday he is not running for the SA presidency. Hungbui acknowledged having sent the emails, but said in a written statement, “allegations revolving around a supposed leaked email are blatantly false.”

Thomas said he proposed the new regulations in response to concerns he received last week from two anonymous students.

Thomas said a member of a club notified him of a candidate promising blanket tax or initiative funding, both of which are comprised of student funds, in exchange for allowing this particular candidate to campaign at a club meeting. This promise would be impossible for the SA President or any SA Executive Committee member to follow through on, as the independent Blanket Tax Committee controls access to student funding. At the time of print, the Thresher could not verify the identities of the organizations allegedly offered funds or of any offending candidates.

Another student who was involved with a candidate’s campaign notified Thomas that this candidate had met with Turning Point USA. The group recently received widespread media attention for launching Professor Watchlist, a website claiming to identify professors that “discriminate against conservative students.”

It is unclear whether each of these anonymous students were referring to the same candidate. However, both of Thomas’ sources said the candidate of concern was considering creating a ticket for the race. Though candidates have not done so in the last several SA elections, campaigning as a ticket is not unconstitutional, according to Thomas.

Thomas said the regulations prohibiting non-Rice individuals from providing any uncompensated support to the campaign aims to level the playing field, since low-income students or those without political connections may not have equal access to professional consultants. The regulation would require any support from non-Rice entities to be compensated at market value, as determined by the Internal Revenue Service.

“If we allow these external groups to come in and start professionalizing these campaigns, then it becomes a proxy fight between the RNC and DNC and that’s not what it’s meant to be,” Thomas said. “It’s meant to serve the Rice community.”

The Thresher obtained an email sent by Hungbui on Jan. 28 to a group of students stating he had spoken with a representative from TPUSA about receiving support for a campaign for SA Executive Committee positions. The email contains a forwarded message from Sarah Swanbeck, who stated she works for the Campus Leadership Project within TPUSA and offered to help Hungbui in a campaign for SA president.

In the email to the group of students, Hungbui stated that Sid Richardson College senior Reid Coleman and Hanszen College sophomore Sam Zorek had told him about TPUSA. Coleman and Zorek did not comment on the emails.

Hungbui wrote that he and the email’s recipients were involved in creating a ticket for the race, in which individuals running for more than one position on the ballot campaign conjointly.

“TPUSA is dedicated to ‘retaking’ college campuses away from the radical left, and are interested in supporting our ticket,” Hungbui wrote in the email. “Sarah Swanbeck, an experienced political operative from Austin, will be helping us.”

Hungbui stated in the email that TPUSA is strategizing for their election campaign and conducting research into the SA election procedures and potential candidate members. He also said Swanbeck would be coming to Houston in the coming week of Feb. 6 to discuss strategy. Swanbeck could not be reached for comment.

“We will not be running an explicit conservative campaign, as the platform will be tailored to Rice,” Hungbui said in the email.

Hungbui initially declined to comment but later gave a written statement in which he agreed he sent the emails, which he said were confidential.

“The emails I sent were included with a statement of confidentiality with appropriate legal privilege,” Hungbui wrote. “I would then suggest that you take care with your publishing, as your ‘source’ may not be cognizant of that fact.”

In the same statement, Hungbui stated the information contained in the email was false and objected to its publication in the Thresher.

“These slanderous allegations revolving around a supposed leaked email are blatantly false,” he said. “I irrefutably deny such lies. I am also disappointed that the Thresher would stoop to the level of fake news. I believe that the Rice student body ought to be shocked as well with this erosion of journalistic integrity from our school’s historically exemplary student newspaper.”

“[TPUSA will] tell people [to] outspend [limits] but do it on untraceable materials, like ‘print extra flyers because it’s hard for people to count the number of flyers,’ or ‘print a social media ad because it’s more difficult to track,’” Thomas said. “‘Don’t buy 1,000 T-shirts because it’s easier to see T-shirts.’”

In the email, Hungbui said 26 of the 30 candidates TPUSA had backed in various university student government elections had been elected, a number Thomas repeated in an interview with the Thresher.

Hungbui added that he was searching for a female member to add to the ticket, and outlined a social media strategy against his opponents for when campaigning officially begins next week.

“Right now we need two more members on the ticket for treasurer and secretary, and preferably one of them is a lady (not the secretary? haha),” Hungbui wrote. “Meeting [with Swanbeck next week] will probably last a few hours, with some interviews and other content we can blitzkrieg the opposition with on social media at 10 p.m. on [February] the 20th.”

Hungbui wrote that those on the campaign who weren’t on the ticket would be rewarded with an appointment as the director of an SA committee if their campaign won. He closed the email with “Make Rice Great Again! (NOT our campaign slogan, haha).”

Todd, a Wiess College junior, said Hungbui contacted her through Facebook about running on his ticket.

“He asked me to consider running because ‘they could help me win in a BIG way’ and finally when I said no, [he asked] if I would endorse their candidate,” Todd said.

Onwenu, a junior, said he has submitted a petition to run for SA president but was not involved in any behaviors that have been banned in the new election regulations. Onwenu said he met with Hungbui after the latter reached out.

“I met him recently because he was super over the top about getting involved in the SA, but I denied his request to join his ‘ticket’ and had no idea of any TPUSA affiliations,” Onwenu said. “To put this in perspective, I doubt a black pre-med from Detroit who supported Bernie is TPUSA material.”

Alex Bergin-Newman, president of the Rice chapter of the American Civil Liberties Union, said Hungbui reached out to her about the election by email, which she provided to the Thresher.

In a Jan. 23 email to Bergin-Newman, Hungbui said he wanted to combine strengths to win.

“We are creating an all-star ticket,” he wrote.

On to the elections

SA Treasurer and Duncan College sophomore Maurice Frediere and former SA Senator and Will Rice College junior Jake Nyquist also said they submitted petitions for the SA presidency and were not involved with TPUSA or promising access to student funds in exchange for campaign support.

Thomas said he proposed the new regulations with the knowledge that the candidates are already potentially engaging in unconstitutional procedures by campaigning before the official campaigning period begins next Monday.

“People do plan for their campaign ahead of time to get feedback and help designing logos,” Thomas said. “[But] there’s a line between what is acceptable and what isn’t acceptable. I would think that [this] would cross the line.”

Anita Alem is a member of the Blanket Tax Committee. News Editor Drew Keller contributed to this report.