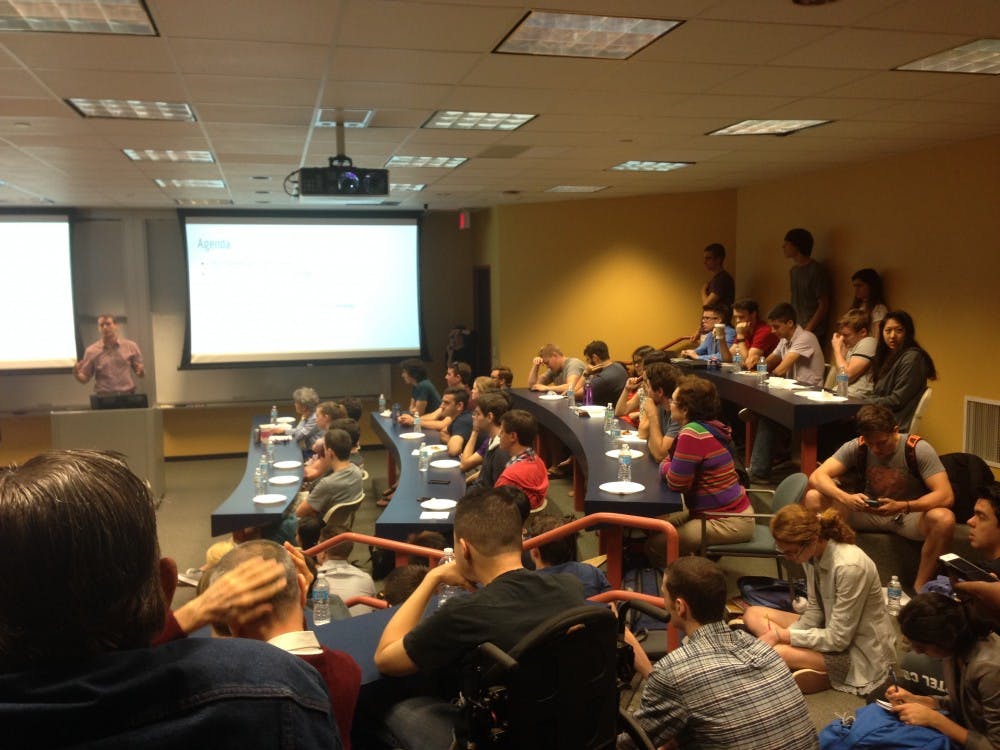 According to Drew Petty, president of Rice’s American Society of Mechanical Engineers chapter, the group felt compelled to speak out after hearing of the computer science department’s town hall in the fall. Petty said ASME began planning in the fall and spoke with professors and the head of the department Laura Schaefer.

“Once we started talking with the mech department, especially Dr. Schaefer, we learned that the issues [we faced] were shared by them,” Petty said. “The understaffing and underfunding was constantly affecting them."

According to Schaefer, although all of the faculty in the department care about the students, they also have to balance research, working with graduate students and university committee work.

“We’re not able to focus on the students as much as we’d like to,” Schaefer said. “We want to find solutions to this.”

Provost Marie Lynn Miranda, Schaefer and eight of the nine faculty of the department attended the event. Miranda spoke at the start of the town hall, after which Wiess College junior Josh Kaye delivered a presentation that compiled many student concerns.

“The presentation ended up being my attempt to capture the feeling and the perspective of the students without being outright disrespectful,” Kaye said. “[Those feelings are] outrage, frustration, confusion and disappointment.”

One major area of student complaints was the relatively small number of tenured or tenure-track faculty, which often results in adjunct faculty, who may be at Rice for only one semester, teaching courses. According to Schaefer, the mechanical engineering department has nine T/TT faculty, but two are on sabbatical this year.

Petty said he had not taken a course with a T/TT faculty until the spring semester of his junior year.

“I [have] never had a chance to develop a relationship with any of the faculty,” Petty said. “I knew I came to a small university so that I would have those opportunities."

Schaefer said the addition of adjunct professors, who often have careers in industry, in the past has been partly due to administration providing funding for classes late. However, Schaefer said administration has been receptive to providing increased funding earlier and does not expect this issue to occur in the coming year.

"In past years, shortly before the beginning of a semester, the administration has said, 'Here’s a little bit of money. For this particular class, find an adjunct,'” Schaefer said. "But because we’re hiring people at the last minute, it’s not people who are going to be here during the day. It’s people who are trying to fit it around their career.”

Schaefer said the department had also been spending some of the money in the professional masters program if additional funding was necessary.

Another issue students raised, large class sizes, is related to the lack of professors and funding. Schaefer said the split between MECH and materials science and nanoengineering that occurred two years ago had an impact on this as well. According to Schaefer, although the split could potentially be beneficial for the department, she also felt it was problematic.

"I think that split overall was a really good thing," Schaefer said. "Previously, there were problems still with overstuffed classes, overworked faculty in Mechanical Engineering but it was camouflaged [by the higher number of faculty]. [With combined departments], if you have 60 MECHs a year and 10 material science people a year, all of a sudden you have 70 students a year and you have 20 faculty. But really it wasn't divided down that way. Previously, the MSNE faculty helped teach some of our classes."

Several students also said labs faced a variety of problems, including broken or old equipment and inefficiently large lab groups. Mechanical engineering professor Matthew Elliott said his Junior Laboratory (MECH 331) has lab groups with eight to 10 students. Kaye, along with several other students at the town hall, said this size was too large and resulted in a few students doing all of the work while others were able to do well without contributing.

ASME board member and Duncan College junior Preston Hill said he is a teaching assistant for Industrial Process Lab (MECH 340), a lab that has equipment in two different buildings but only one adjunct faculty to teach the course.

“I teach people how to weld and [department technician and shop manager Joseph Gensehues] supervises me via webcam,” Hill said.

Schaefer said that while the class sizes have doubled over the past few years, the amount of machines and space has not. Schaefer said the lab machinery can also be expensive, reaching around $250,000, but the department receives only $8,000-9,000 annually to repair lab equipment.

Schaefer said the department implemented a short-term solution this year by hiring Elliott, but her priority in the long term is to have more classes and smaller classes. Thomas and Schaefer agreed this would involve hiring multiple full-time T/TT faculty as well as nontenured lecturers.

Schaefer and Thomas both said the engineering department as whole has considered capping the size of enrollment in the division.

“Currently about 40 percent of the undergraduates at Rice are majoring in engineering,” Thomas said. “Engineering has requested fewer freshman admissions in order to limit the number of majors.”

Miranda said administration authorized searches for new faculty last July and has hired Fred Higgs, who will join this July.

“This was well before the students organized the town hall, but hiring good faculty takes time,” Miranda said.

Miranda said she felt the dialogue was collaborative at the town hall, and encouraged students to use other methods of sharing their concerns, such as attending her office hours, as other students in the department have done in the past.

Schaefer and Miranda said the department is also currently looking into hiring two more faculty who will most likely join in January of next year, and Miranda confirmed that a faculty member currently in computer science has been offered position in the department as well.

However, mechanical engineering professor Andrew Dick will be leaving and two professors will again be going on sabbatical.

“Whatever [administration] gives us, we're going to do the best we can with it,” Schaefer said.