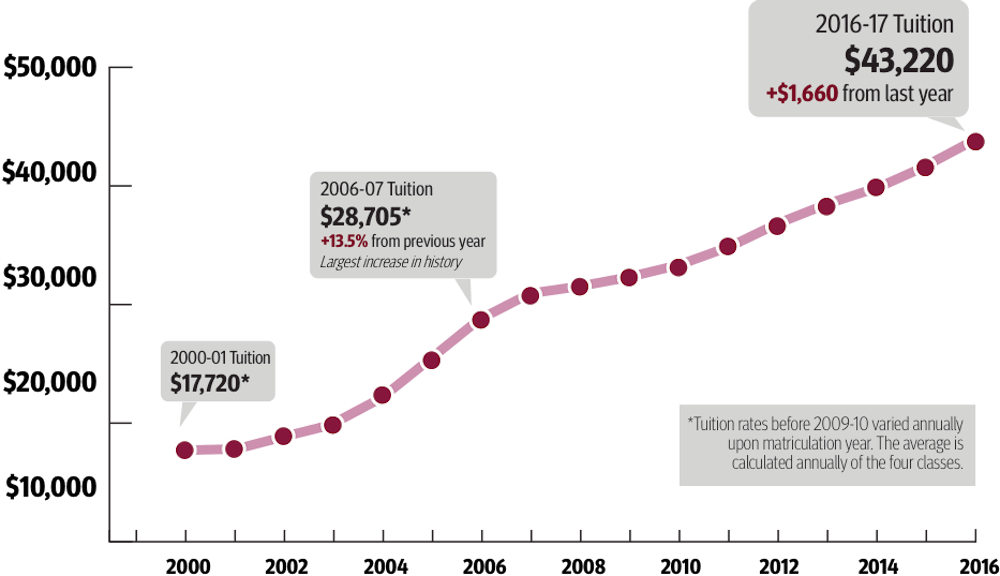 The annual increase of Rice University’s undergraduate tuition has come to be expected every year, and the price tag to attend Rice in fall 2016 is no exception.

According President David Leebron, the administration has worked to keep tuition hikes as low as possible, given donor support and contributions to Rice’s endowment.

“Our undergraduate students contribute through their tuition and fees payments on average about 30 percent of the total cost of their education, but we have worked very hard to keep increases in their share as small as possible even while adding enhancements to our educational programs,” Leebron said.

Vice President for Enrollment Chris Muñoz said a student’s investment in Rice is matched by the quality of life afforded by a Rice education, citing the university’s 2016 Princeton Review rankings, including No. 1 for racial interaction.

“Students who invest in a Rice education get to study at a university that is highly ranked for quality of life, happiest students and lots of race and class interaction by the Princeton Review,” Muñoz said.

Even with the tuition hikes, which represent a total increase of 144 percent since 2000, Rice’s tuition remains lower than those of peer institutions, according to the most recent reports. Duke University has reported its 2016 tuition rate to be $51,510. In 2015, Northwestern University’s tuition was $48,624. Vanderbilt University’s 2015 tuition of $42,768, though slightly lower than Rice’s 2016 tuition, will also likely increase for 2016. All three institutions have consistently shown yearly increases in tuition since 2000.