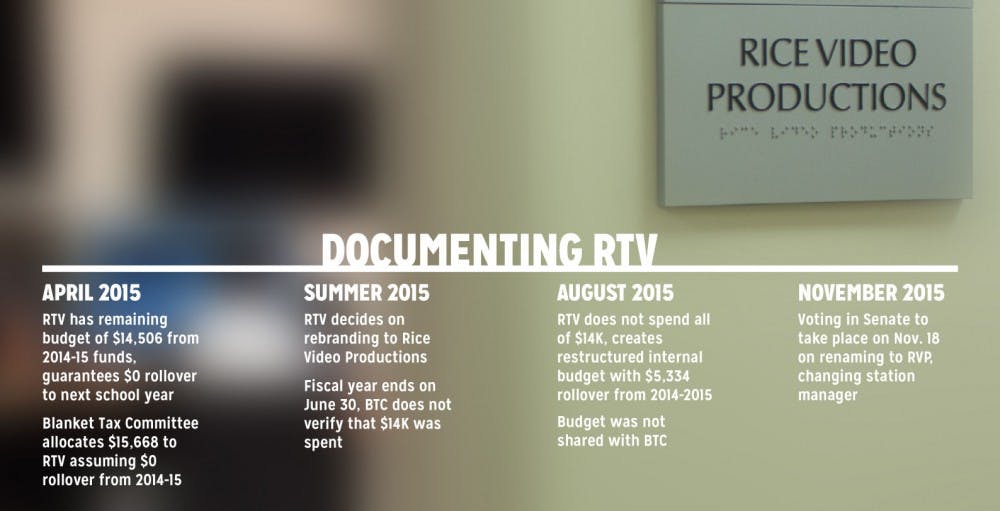 Rice Television is currently rebranding itself as Rice Video Productions. RTV must also adapt to the new blanket tax process implemented last year, as the current 2015-16 budget shows an unauthorized rollover of $5,334 left unaccounted for by the Student Association Blanket Tax Committee.

At its Nov. 18 Senate meeting, the Student Association will vote upon the renaming of RTV to RVP, as well as a change in station manager from Lovett College senior Rachel Gray, who was elected in last year’s general election, to Baker College senior Patrick Huang. The organization has already been functioning as RVP, with Huang as station manager since August.

According to SA Treasurer and BTC member Sai Chilakapati, the BTC will meet and discuss the unauthorized rollover with RTV. Chilakapati, a Hanszen College junior, said an approval of this renaming may be followed by a closer look into the organization’s mission and budget.

“[In the new system], we don’t care about your budgets from two years ago,” Chilakapati said. “We want to look at have you spent [funds] this year, and how do you intend to spend them the following year?”

According to the SA Constitution, the BTC may instruct an organization to return all or part of the surplus in excess of 125 percent of the budgeted surplus. A two-thirds vote by the SA may require complete or partial return of unapproved surplus.

By its blanket tax review process in April 2015, RTV had spent $6,316.40 of its budget for 2014-15, leaving $14,500 in unused funds. In email correspondences between Chilakapati and RTV leadership, the organization said it planned to use all of the funds by the end of the fiscal year in June 2015, so the proposed budget for 2015-16 indicated an expected $0 rollover from 2014-15. The BTC analyzed this proposed budget and allocated $15,668 of student funds to RTV, assuming    $0 in rollover from the previous year.

“We felt that the explanation they provided [for the usage of the $14,500] was sufficient,” Chilakapati said. “We approved them with the condition they report those expenditures to us.”

The BTC corresponded with RTV on April 11 and requested the organization provide a list of purchases of the remaining $14,500 once it was spent. However, the BTC did not provide a deadline by which to respond. No further correspondences regarding the budget occurred between RTV and the BTC until the Thresher approached the two organizations.

At the beginning of the school year, RTV created a restructured budget for 2015-16, which was a better use of resources, according to Gray. This budget was not shared with the BTC but was shared with RTV’s advisor.

“We are happy to submit an update of our budget from last year and our revised budget for this year to the SA,” Gray said. “We just needed to be asked. The last we heard about that was last semester.”

This updated budget showed more than $5,300 of the $14,500 promised to be spent in the previous fiscal year had not been utilized. Gray said, and budget records confirmed, the portion of the $14,500 that was spent went primarily towards purchasing a new Mac computer, a GoPro camera and accessories.

The unused $5,300 rolled over into the 2015-16 year, despite the predicted $0 rollover. RTV Vice President Jeremy Kao said in the past, the organization has purposely kept some surplus because it makes large purchases every few years for computers and other equipment. According to Kao, a Hanszen College junior, RTV understood the gist of the changes to the blanket tax system, but thought it would have the same amount of funding each year regardless of this system.

“We were under the impression that the rollover budget would go to us,” Kao said. “We thought we’d just spend the money this semester, since we weren’t able to finish it in the past year.”

Chilakapati said the BTC was unaware of this restructured budget as well as the existence of rollover. RTV’s internal budget was restructured to allocate $12,100 specifically toward equipment expenditure; the April 2015 proposal allocated $7,300 to the same category of purchases.

“When an organization needs to change their budget, they need to approach me so I can take that back to the BTC,” Chilakapati said. “That was made clear to them.”

Huang said RTV decided to rebrand as Rice Video Productions in summer 2015, in accordance with a shift in programming. RTV had previously filmed Senate meetings, cultural shows and lectures; however, Huang and Kao said they are currently trying to move toward a greater focus on original content.

“Last year, we filmed a lot of events for the club that did the event and not so much for the larger Rice population,” Kao said. “We are trying to do more experimental short films that the entire Rice population could enjoy.”

Huang said the organization’s mission remains the same with teaching students about video production. Students may still borrow and learn how to use RTV’s equipment as well.

RTV has released three videos this semester, including a satirical video on Night of Decadence entitled “NOD BODS,” and is currently editing an Esperanza video. Huang said the split is about 50-50 in terms of covering short films and events but creating original content is often more time consuming. Last year, RTV released more than 30 videos to its YouTube page.

“In terms of a sheer volume of videos we produce, it’s lower this fall,” Huang said. “But I think our quality is going up.”

Huang said the new budget created in August 2015 is reflective of the shift. RTV plans to purchase a camera geared toward cinematography and hired cinematographers to instruct members, which was done for the ‘Nod Bods’ video.

The BTC was unaware of any changes in programming. RTV has been in contact with the SA about its name change since August.

“The way it was phrased to us is that it was just a name change to better represent what that organization’s mission was,” Chilakapati said. “If RTV approached us with a significant change, we’d look at how the mission changed, and we’d like to see a change in the budget to reflect that.”

Blanket tax funds are given on a semesterly basis. However, Chilakapati also said the BTC does not check in with the blanket tax organizations between semesters because it has time constraints from other responsibilities.

“[The budgets] are supposed to be on the archive tab, but it is not stated that students have open access to that,” Chilakapati said. “They should contact me [to see them].”

Chilakapati said the BTC is still in its early stages and will convene to decide what to change for next year.

“We [plan] to ask for any necessary constitutional amendments to make the process smoother and more doable within the academic year,” Chilakapati said.

Rice announced that all faculty and staff are now required to be fully vaccinated for COVID-19, in an email sent on Nov. 19 by Kevin Kirby, chair of the Crisis Management Advisory Committee. According to the policy’s document, the new vaccination policy comes after President Biden issued Executive Order 14042, which mandates that all federal contractors require their employees or anyone connected with a federal contract to be fully vaccinated by Jan. 4, 2022, unless granted a medical or religious exemption.