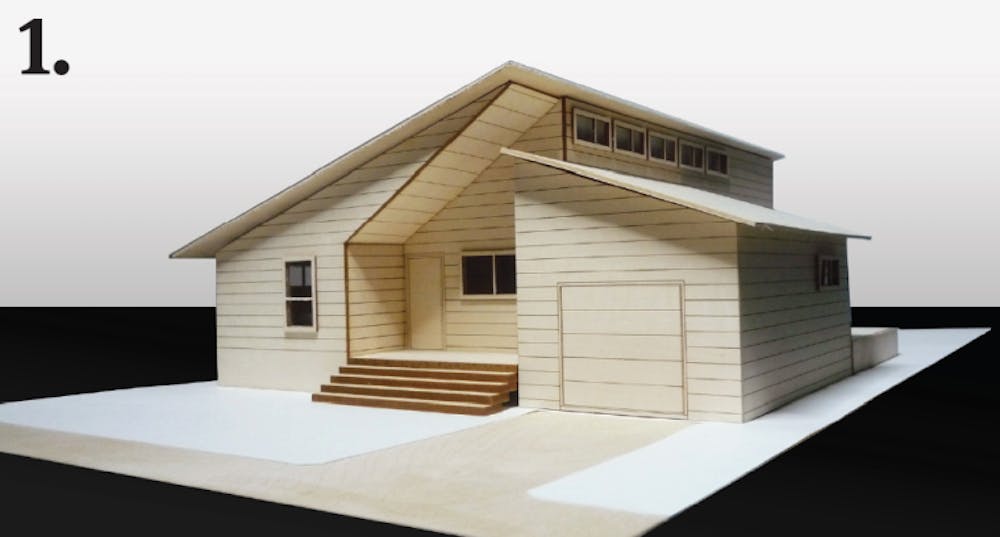 A handmade model built by the architects represents what the house will look like.

A Habitat for Humanity volunteer, group president and enthusiast, McMurty College senior Tawfik Jarjour is directing the Rice Centennial House Project, who goal is to fully design and fund a Habitat House through Rice's chapter of the organization.

Jarjour got the idea to create a Habitat House – including designing it, building it and raising the $65,000 needed to complete it – after he learned that Rice had done similar projects in 1997, 2000 and 2004.

Hoping to get the university involved with his project, he suggested making it a part of the Centennial Celebration and Rice's official contribution to community service for the year.

Jarjour established the connection between the university and the Houston Habitat for Humanity chapter through a series of meetings with administrators and the Center for Community Involvement. He said Habitat for Humanity has had about 1,000 Rice students volunteer for various projects over the course of the school year.

Two master's of architecture students, Yoni Pressman and Courtney Benzon, worked through the summer to design the house. In accordance with Habitat's goals, the design aims to make the house highly sustainable and easy for unskilled laborers to build.

The house is 1,300 square feet – including three bedrooms, two bathrooms, and a large combined living room and kitchen space. There are also front and back porches and a one-car garage.

"It's going to be a very green house because the rooms will be naturally lit as much as possible, and we have installed ceiling fans and windows that can be easily opened," Pressman said.

Solar panels will cover the roof, which is designed at a specific optimum angle which will allow the panels to pick up the most sunlight possible, Pressman said. Green Mountain Energy will be donating the panels, which are not included in the $65,000 cost, Jarjour said.

"The key thing about about this design is that it is simple and cost-effective as well as space-effective," Jarjour said. "We hope to make a house that is better for the environment for the same price."

The design will be a permanent addition to Habitat for Humanity's existing set of three standard homes they regularly build. The organization is making a push for more solar homes because oil companies often offer support for green homes, Jarjour said.

The house will be built in the Fifth Ward of Houston, and a community organization in the area or the City of Houston will donate the land. The group has not yet determined the exact location for the house.

Fundraising efforts included contacting at least 75 corporations and sending around 1,000 emails to Rice alumni. The group has set Feb. 10 a fundraising deadline for itself, and Jarjour estimated that they are about 40 percent of the way to their goal.

"It is going to be difficult but I think [reachable] in the next couple of weeks," Habitat member and Lovett College freshman Nick Thorpe said. "It is an ambitious goal to begin with, but usually in the last couple of weeks is when things get going."

Aside from traditional donations, West Servery's Senior Executive Chef, Roger Elkhouri, has agreed to make 1,000 cinnamon rolls that will be given away to those who make a donation in front of Valhalla on Feb. 10 between 3 and 5 p.m.

Habitat for Humanity will choose the family that receives the house through its standard application process. Applicants are selected based on need and ability to pay a monthly fee, as the house is not free. The family will pay for it as if it has a mortgage without interest. Each family that receives a Habitat House must also contribute 300 hours toward building other houses, Jarjour said.

Habitat for Humanity has built 830 homes in the Houston area since the city's branch was established 25 years ago.

"I am really excited and very proud that the Rice community has been able to come together and put all these resources into making this happen," Jarjour said.

Pressman also said he is ecstatic about the project culminating into a reality.

"I've learned a lot from the experience, and I am excited to start my career with this behind me," he said. "It's been great to try out the things I have learned in architecture school and execute them all the way to a finished building."

“We cannot ignore the very real and very problematic history of the man who founded this institution,” Gabrielle Falcon (Martel ‘20) said. “Progress is inevitable and I would hope that Rice would do its best to join the wave of progress we have been seeing this summer, instead of making pointed decisions to prevent it from flourishing.”