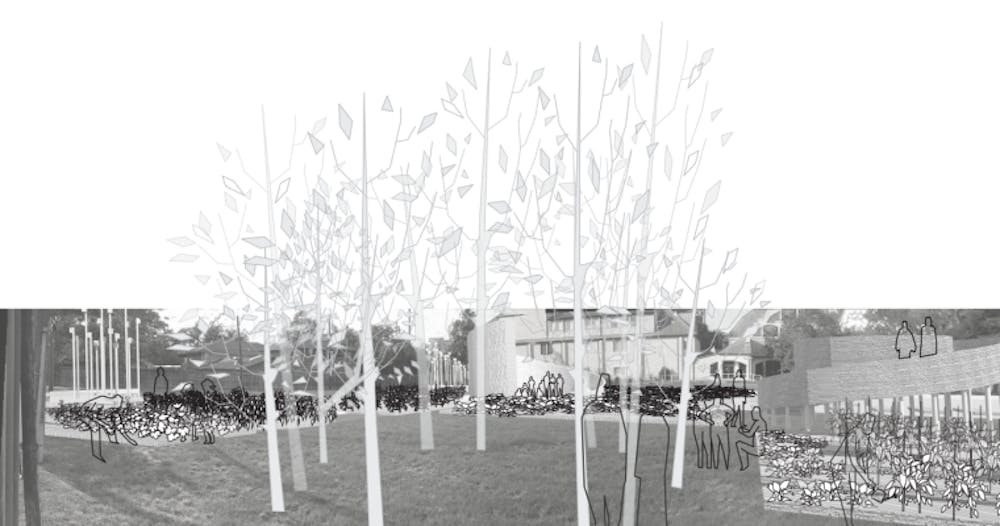 The architecture students who entered and won the Housing and Dining competition the weekend of Oct. 7 might be disappointed that their project will never become a reality, but at least they can take solace in their victory.

A group of three senior students designed a project called "Spot" for the competition that was originally called for by H&D as a means of building a garden on the land just off campus between Greenbriar and Chaucer St.

Though the garden won't be built now, H&D hopes to use the plans in the future, H&D Project and Contract Manager C.J. Claverie said.

The winning design was made by Jones College senior Michael Matthews, Brown College senior Bomin Park and Baker College senior Gail Chen. The three students worked together to make a garden that would be visually interesting and accessible for visitors.

"We wanted it to be more of a park and more part of the community rather than just a Rice garden," Park said.

The group designed the garden with a circular theme created both by groupings of trees as well as structures. Part of the design criteria stipulated that the garden should have a meeting area that could be a classroom as well as storage.

"We wanted to have highly visible points of attraction," Matthews said. "A field that is a garden is not that attractive, so we wanted something visibly interesting to pull you through the site."

The garden has a circular meeting area or classroom with an indoor space and an outdoor area on the roof.  There is also an observatory with a spiraling ramp to the top that doubles as a storage area.

"We wanted it to be fun; the Rice campus is kind of rigid," Park said. "We wanted a free-form that deviated from the Rice axes."

Even if the garden is not built, the participants, H&D and the Rice School of Architecture think the experience was educational and spurred collaboration between departments. Though not required, the RSA encouraged the groups to work with someone from outside the architecture school.

The competition was organized by graduate student Andrew Daley, who created the brief for the project.

"It was really impressive and important for students to take on that responsibility," Dean of the Rice School of Architecture Sarah Whiting said. "It's not easy to organize but an incredible learning experience to set up. I admire that students are so willing to take on initiatives. What the groups did was far more than I had envisioned."

Whiting said she was glad the project came from the students so that it didn't seem like an assignment or an obligation.

The charrette, a word referring to the last stage of a project during which a lot of work is done in a small amount of time, was a good brainstorming exercise for students to design something with the idea that it would be built, Whiting said.

"Part of what we are trying to do is be innovative with ideas that are possible," Whiting said.

Claverie said she felt all four designs were very creative and had a lot of elements that could be worked with later.

"There were things in each one that would be neat to incorporate in a multi-use and multi-dimensional space; there is a lot to work with," Claverie said. "The level of enthusiasm students bring to a job in a project like this is really different."