Review: ‘Jesus Christ!’ that was an experience 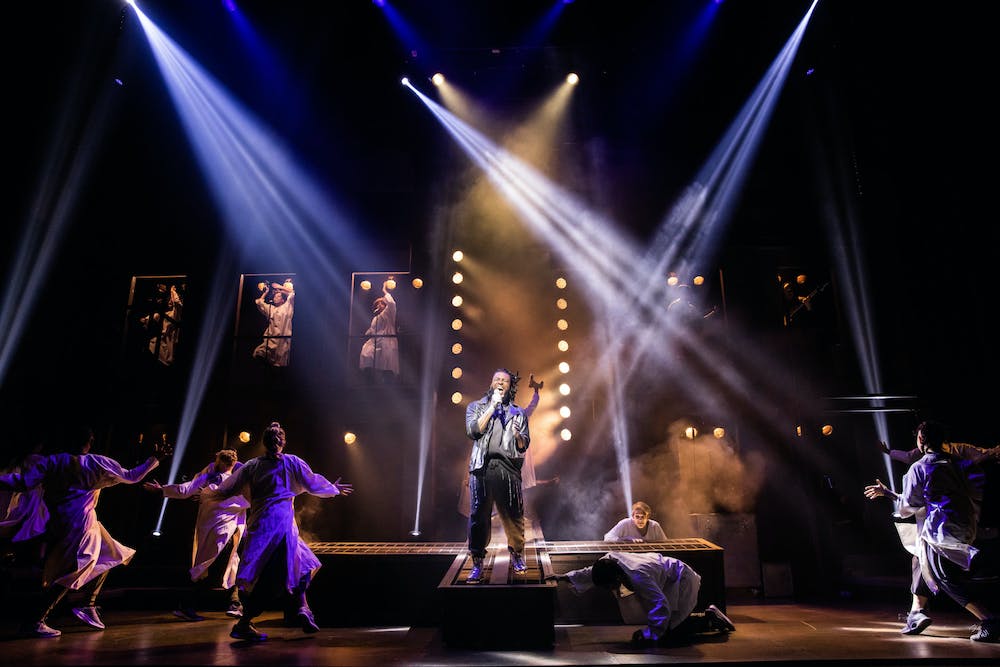 When I sat down in the Hobby Center to watch “Jesus Christ Superstar” on its opening night in Houston, I wasn’t sure what to expect. I had been warned by cast member Colin Robertson to expect glitter, loud volume and the unexpected. What I wasn’t anticipating was for a majority of the cast to run in through the back of the auditorium halfway through the first number to kick the show off with a bang. It certainly brought the show to life rather instantaneously, and my plus-one who went to the bathroom and accidentally got locked out until after the opening number said watching them warm up in the lobby was even cooler. They were dancing, stretching, vocalizing and hyping each other up while we were all sitting unbeknownst inside.

Once the cast took the stage, a wonderful production ensued. The show ran 90 minutes with no intermission and almost no dialogue in between songs, similar in that sense to an opera. The cast included a multitude of amazing singers, including Jesus himself (Jack Hopewell), who hit more high notes than humanly possible. Faith Jones, the actress who played Mary Magdalene, took a different approach with an incredibly calming and angelic presence, contrasting the intensity of some of the songs and creating a wonderful balance as the show progressed.

Beyond the singing, the music in the show was also crafted in a unique way that contrasted itself, with Peter and Jesus getting to jam out together in the strumming of their guitars while also performing  louder, heavy metal riffs in other numbers. I felt transported to a rock concert but with indie intermissions.

The dancing in the show was what I was the most impressed with. The choreography was intense and extremely high energy — lots of jumping, swinging and constant movement. The ensemble never did anything with less than 110 percent, including managing to stay in sync with one another. This came in handy as many scenes had them acting as a general “mob,” the details of mirrored expressions and nuances pushing the storyline further.

One of the things that Robertson mentioned beforehand was the glitter present in the show. This both surprised and underwhelmed me. Based on the hype, I was expecting glitter raining from the ceilings galore, blinding me like the costumes at the end of “A Chorus Line.” There was glitter, but it was only in a couple scenes, and towards the end I was feeling let down. However, as Jesus was being sentenced, the glitter made another appearance: It was used to symbolically whip him before he was put on the cross. I know I didn’t pay all that much attention in my Southern Baptist upbringing, but I think I would’ve remembered beating Jesus with glitter in the New Testament.

Jesus was cool, but this show also had me cheering for the bad guys, a group of high priests against Jesus that included Caiaphas, played by Isaac Rycheghem. Anytime that he came out in his vest and tiny sunglasses, I knew I was in for a good number and quality plot development. I even felt bad for him and the rest of his posse because I was rooting for them to get something other than leather vests to cover their chests, but to each their own, I suppose. I also never knew of Caiaphas, the high priest who organized to kill Jesus. I know much of this show is satire, but similar to “The Book of Mormon,” I found myself learning something.

Overall, I very much enjoyed this show. I came in hesitant about the volume but never found myself overwhelmed. The presence of the musical instruments on stage brought the concert element to life, and it was an unbiased, musical theatre take on the last days of Jesus’ life. I would recommend the show as it continues on its tour to anyone who has the chance to see it. You might even learn something about Christianity (but don’t quote me on that).