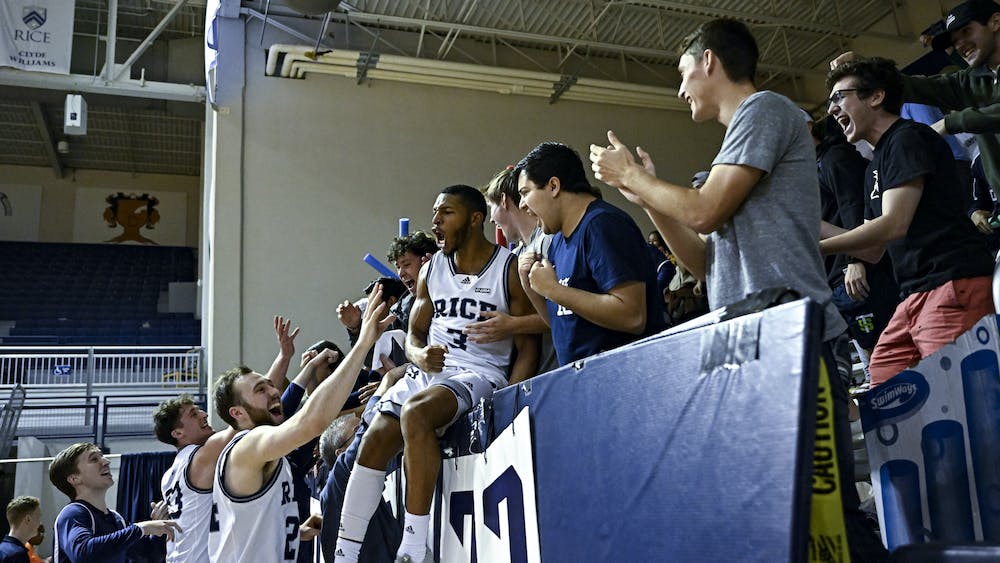 If momentum really is as powerful a force in sports as countless armchair coaches and talking heads would claim, someone forgot to tell Rice junior guard Travis Evee. Up by five with 30 seconds to go, the Owls men’s basketball team allowed a quick basket, turned the ball over, allowed another layup, turned the ball over once more and committed a foul with six seconds remaining to give the University of Texas at El Paso a chance to take the lead with two free throws. The Miners’ Tae Hardy hit both free throws, and Rice, now trailing by one, appeared on the verge of a collapse of somewhere between normal and epic proportions. But Evee told “uncle Mo” to sit down, driving the length of the court to sink a left-handed floater as time expired to give the Owls a whiplash-inducing 83-82 win.

After the game, Evee said he knew the shot was going in as soon as it left his hand.

“It felt good leaving my hand,” Evee said. “It was kind of a tough angle. But I believe I can make that shot.”

The game’s beginning was just as close as its ending. The teams traded baskets throughout the first half and neither team led by more than five in the game’s opening 13 minutes. The Miners pushed ahead behind a 13-3 run around the five-minute mark but a scoring tear from junior guard Quincy Olivari, who scored 11 points in just under two minutes, closed the gap to one, before a pair of late free throws gave the Miners a three point lead going into the break.

The Miners inched ahead to a seven-point lead in the opening minutes of the second half. But after the lead had been narrowed to six, back-to-back-to-back threes from Olivari — who scored a game-high 23 points — and Evee gave the Owls their first lead since the 11-minute mark in the first half. Another pair of baskets from the Owls’ two star guards extended their lead to seven, and they withstood a push from the Miners, never letting the lead slip below three until the game’s final seconds.

Up by three with a minute to go, Evee connected on a pair of free throws to put the Owls back up by five. A quick UTEP dunk to close the gap to three was canceled out seconds later when junior forward Max Fiedler took a foul and hit both of his free throws. But the Miners refused to go away and drove the length of the court in three seconds for a Mario McKinney Jr. dunk. Then, Hardy picked off an errant pass by sophomore guard/forward Cameron Sheffield, leading to another McKinney basket. Up by one, Olivari turned the ball over with seven seconds left and Hardy drew a foul with six. According to Rice head coach Scott Pera, once Hardy made his first free throw, part of him wanted the second shot to go in as well.

“In a way, you want him to miss because you want it to go to overtime,” Pera said. “But I also know it would’ve been harder to get the play off … depending [on] who got the rebound. Well he made it, so we could get the ball into Trav.”

Pera called a timeout between Hardy’s two shots to draw up the Owls potential game winner. According to the head coach, he got the exact look he wanted, but ultimately Evee’s flash of brilliance decided the game.

“We wanted a high, flat ball screen from Max so Travis was going fast,” Pera said. “I figured they would switch, well if he’s going fast and has a bigger guy on him he’s got a better chance of A, getting around him or B, getting a shot off. And then he did the rest.”

With the Owls moving to the American Athletic Conference next season, this was the potential last chapter in a rivalry that Pera said has grown increasingly competitive in recent years. After the game, the Miners opted not to wait for their hosts to finish celebrating Evee’s shot, and headed to the locker room before shaking hands with the Owls. According to Evee, the Owls know exactly how their cross-state rivals feel about them.

“I don’t think it’s much of a secret that they don’t like us,” Evee said. “We don’t really like them. But they’re going to play hard every game that we face them – they want to beat us just as much as we want to beat them.”