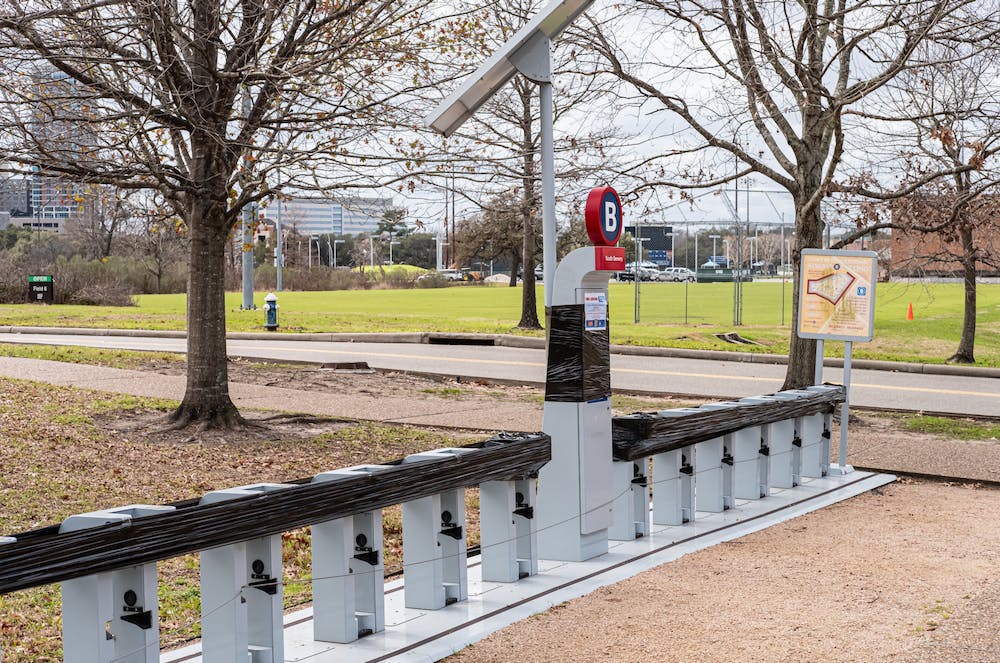 All Rice University rentable bike share stations, except for the Biosciences Research Collaborative station, have been temporarily suspended as of December 2022 without a designated return date. The closures are part of a city-wide suspension of 75 of the 153 Houston BCycle stations.

Houston BCycle, run by the nonprofit Houston Bike Share, rolled out the station suspensions from November to December 2022 to cut costs in order to keep the network running. According to a statement by Houston BCycle, the rapid increase in stations over the last 10 years of operation has not been matched by sufficient growth in revenue and funding to sustain them.

Board Chair and Interim Executive Director of Houston Bike Share Maya Ford said that stations closed were chosen based on reliability, location and ridership to maximize operations.

“Our goal was to squeeze the network to a way that still allowed for ridership in a very consistent way that allows us to be able to afford it, and then to negotiate a better system very quickly that we can implement so that it’s more consistent,” Ford said.

Ford said that bike share is a fairly new phenomenon with many aspects from software to hardware to maintain, and that when the opening of the Rice stations was first agreed upon, BCycle did not fully account for what it would cost to sustain the operations.

“I think that we were in startup mode and what we agreed upon initially [didn’t] end up being the same in the end,” Ford said.

Executive Director for Sustainability Richard Johnson said that he was surprised to receive the announcement on Dec. 5 from Houston BCycle that they would be temporarily closing most of the Rice stations.

“For their financial situation to deteriorate to the point where they’ve had to temporarily close so many stations in their network really caught me off-guard, because I would have expected BCycle to work with those entities to resolve financial shortfalls before we had reached this point,” Johnson wrote in an email to the Thresher.

According to Ford, Houston Bike Share is working with the City of Houston, Harris County and METRO to find a solution by the end of January and reopen BCycle stations by the end of March.

Director of University Relations Greg Marshall also said that the Rice bike share stations will be reopened at some point, but there is no set date or operator.

“The question is, would BCycle simply find more funding, or would another organization take it over?” Marshall said. “That’s in negotiation.”

Marshall said the bike share stations are meant to benefit not only the Rice community but the surrounding Houston community as well.

“You’ll notice a lot of them are kind of near the access points to campus, like near the Entrance 3 garage,” Marshall said. “There’s also one at the graduate apartments in the [Rice] Village, which is effectively another Village station; even though it’s there for our students, it can be used by others as well.”

Rebecca Yee, a Wiess College junior and EcoRep, said she has used the Rice BCycle stations to make short trips off campus and finds biking to be a sustainable way to travel into the surrounding area.

“I do think they are useful in that situation, so it’s kind of unfortunate that students who are looking for those more short-term rides and may not want to have a bike long-term or lug it around the entire semester can’t do that,” Yee said.

Houston Bike Share chose which stations to suspend based on ridership, power source reliability, location and proximity to other transportation options like the METRO.

“The university stations came offline in part because they’re not used 365 days,” Ford said. “It costs us money to operate all parts of the network.”

Johnson said that he hopes the bike share stations are restored on Rice campus soon to allow for more diverse transportation options on and around campus.

“We’ve tried to build a portfolio of transportation options for the Rice community — and in particular students — so that owning a car is not a necessity for attending or working at Rice. Transit passes, the ZipCars, the shuttle bus services, bicycle infrastructure and the BCycle stations are all part of that portfolio,” Johnson wrote in an email to the Thresher. “Hopefully the closure of the BCycle stations does prove to be just brief and temporary, because we are committed to the concept of a thriving bicycle sharing network at Rice and in Houston.”