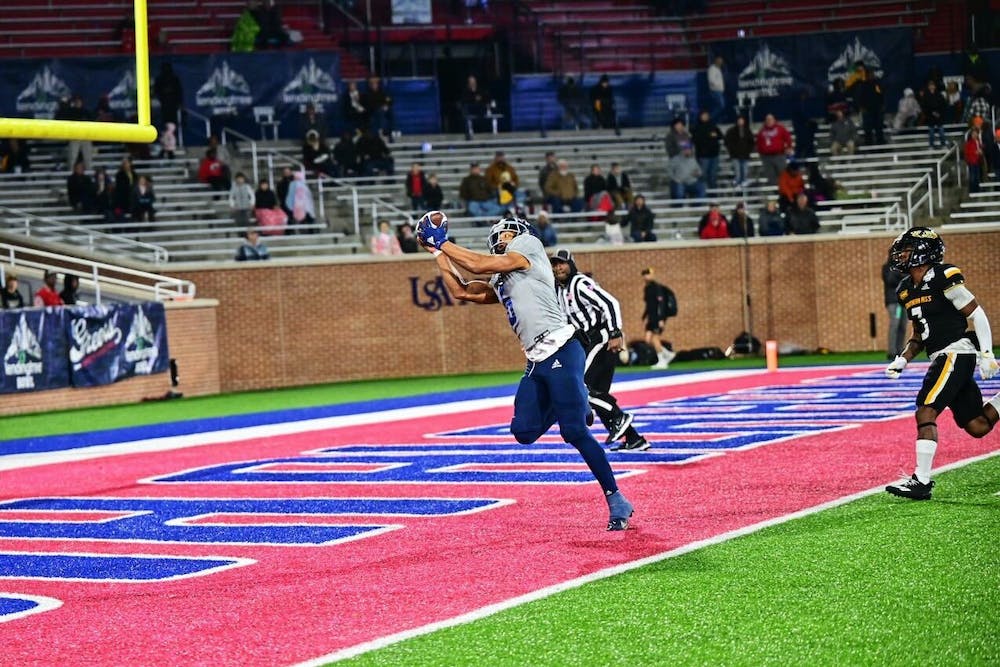 Rice’s 38-24 loss to the University of Southern Mississippi in the LendingTree Bowl on Saturday was listed on ESPN as NCAA Football: Rice vs. Southern Miss. But according to the Owls’ head coach Mike Bloomgren, the broadcast could have just as easily had a different name.

“The Frank Gore [Jr.] show,” Bloomgren said. “We know how impressive Frank is, what a great athlete, what a great runner he is, and I thought he was phenomenal.”

Gore, the Golden Eagles’ sophomore running back and son of the third leading rusher in NFL history Frank Sr., set a bowl-game record with 329 rushing yards against the Owls. He added three total touchdowns, the last of which – a 55-yarder with three minutes remaining – put the game away while giving him the highest single-game rushing total of any player in the FBS this season.

Gore and the Southern Miss offense led the charge early as a pair of first half touchdowns, including a 64 yarder from Gore, put them ahead 14-0. The teams traded field goals and Rice, playing in its first bowl game since 2014, went into halftime down 17-3. According to Bloomgren, during the break, he challenged his team to fight their way back into the game.

“[I] challenged our guys at halftime to come out and give them their best shot, play their best half of football we could play,” Bloomgren said. “And gosh, we came out and we started doing exactly what we talked about.”

Redshirt sophomore defensive tackle Izeya Floyd forced a fumble on the second play of the next Golden Eagle drive, and, a play later, Rice was in the endzone again as Padgett hit Esdale down the middle from 32 yards out. According to Padgett, all it took to turn his performance around was a change of mindset.

“Honestly, I think it was just me getting my head in the right place,” Padgett said. “That first half, I felt like I was all over the place, I wasn’t getting through my checks the way I was really supposed to. It really just took me sitting down and telling myself, ‘lock in man, you gotta do it for these guys. These are your boys, you gotta play your best.’”

After forcing a quick punt, Rice had the ball back with a chance to take the lead. A 57-yard run from redshirt senior running back Cameron Mongomery put them in Southern Miss territory. Then, just a few plays later, the Owls took a seven-point lead when Padgett floated a ball to the back corner of the endzone for his third touchdown of the day, this one to redshirt senior receiver Bradley Rozner. According to Bloomgren, his quarterback showed just how special he can be in his third-quarter outburst.

“I would say the way [Padgett] came out at halftime was remarkable,” Bloomgren said. “The way he came out with the confidence and swagger and did some of those things … you can see how special he is, you can see how talented his arm is.”

However, Gore and the Golden Eagles answered with a passing touchdown out of the wildcat to tie the game at 24 in the closing minutes of the third. After moving into Southern Miss territory, Rice was forced to punt, and the Golden Eagles got the ball back with the chance to take the lead. Gore gashed the defense for 59 yards on the first play of the drive, setting up what appeared to be a 34-yard touchdown pass from quarterback Trey Lowe. However, it was called back for offensive pass interference, giving Southern Miss second down and 20.

On the first play of the fourth quarter, just outside of field goal range and facing a third-and-16, Gore took a handoff up the middle and danced through the Owls defense for 19 to keep the crucial drive alive. A Lowe touchdown pass the next play made it 31-24 Southern Miss.

Padgett pieced together a nine-play drive to get the Owls back into the game, but facing a fourth-and-six at the USM nine, his jump-ball to Rozner in the endzone was broken up. Rice forced a Southern Miss punt, but two consecutive sacks ensured the Owls would do nothing with their extra possession and they went three-and-out. After the game, Bloomgren said that the Southern Miss pass rush gave his team trouble for much of the day.

“That’s a good rush group with some unique pressures that they bring,” Bloomgren said.

With under five minutes remaining and the ball in Owl territory, Gore picked up another first down on a third-and-seven run that appeared to seal the game, but as he fought for extra yards, sophomore safety Gabe Taylor forced a fumble, giving Rice new life. The Owls couldn’t do anything with their extra chance as a third down sack forced them to punt it back to USM. Then, on the first play of the next drive, Gore put the game away, gashing the heart of the Rice defense for a 55-yard score.

The loss put an end to the Owls season, giving them a 5-8 record on the year. Bloomgren will be back at the helm next fall as the team looks to build on a year in which they qualified for Saturday’s game only after there weren’t enough six-win teams to fill every bowl spot. Eventually, Bloomgren said, he hopes the team can make bowl appearances, and wins, a regular occurrence.

“This was a great bowl trip for our guys,” Bloomgren said. “The next thing we gotta do is learn how to get here and win.”