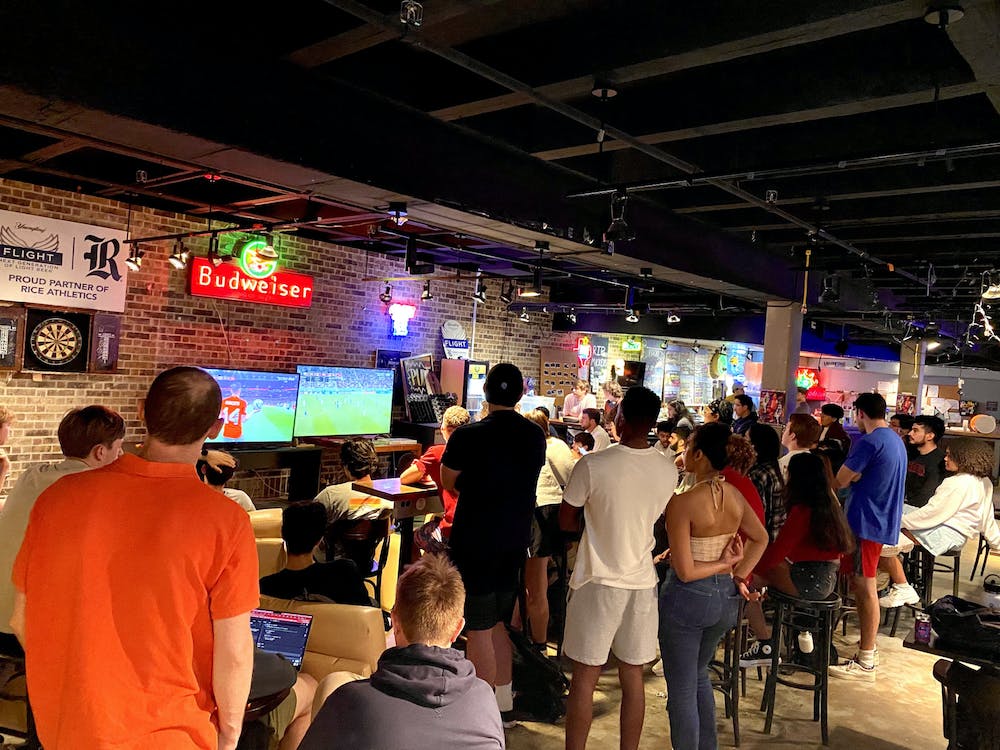 “I like hanging out at Pub in general during the daytime, so finally getting to take advantage of Pub’s drink variety while watching soccer is almost a dream come true,” Lloyd said. “I am pleased to say that the 1 p.m. watch parties so far have been well attended.”

Baker College senior David Pichardo said that even as a newcomer to the sport, watching the games at Pub has been a great experience.

“The atmosphere at Pub has been friendly, inviting and cordial,” Pichardo said. “Despite my minimal knowledge of the sport, I find I am able to connect with strangers as well as connect more deeply with my friends who have a more vested interest in the game.”

On the south side of campus, Sid Richardson College senior Son Nguyen said he began streaming games in the Sid Richardson commons for himself and his friends to watch, but the games started attracting large crowds.

“I wanted to watch the games and suggested it in the [intramural soccer Sid Richardson] GroupMe, and we just started streaming it in Sid commons,” Nguyen said. “We didn’t expect a lot of people to watch the games, since Rice students are pretty busy most of the time, but we were surprised that there are always [a lot of people] watching them, so we kept going.”

According to Baker College junior Ramiro Cantu, who has streamed games at the MultiCultural Center and in Lovett College commons, watching the World Cup with friends has made him more invested in the games.

“I really never kept up too much with soccer in the past,” Cantu said. “But now that we’re in college and with friends, it’s been a lot more fun to keep up.”

Connecting and enjoying the game with other fans has been a key aspect of the World Cup throughout the years, and many watch parties around Rice have been a catalyst in doing so. The scheduling for this World Cup has allowed games to be streamed during the school year, as opposed to the summer. Pichardo said this change has allowed him to interact with various cultures and soccer fans in a way he was previously unable to do.

Will Rice senior and Pub bartender Hannah Usadi said that the tournament’s timing has led to more discussion about it around Rice.

“I have not consistently kept up with it, but it’s super fun getting into it this year since it’s during the school year when everyone can watch and talk about it in person,” Usadi said.

The World Cup has already been filled with exciting wins and heartbreaking losses, but the trophy is still up for grabs. We asked students which country they wanted to see lift the trophy in the final match:

Jonathan Lloyd: “I am supporting teams from both sides of my family — England and South Korea.”

David Pichardo: “I am half-Jamaican, and I know quite a few Jamaicans are huge Brazil fans, so I suppose I have a slight bias toward them.”

Son Nguyen: “I am rooting for Argentina [and Lionel Messi] to win it all this year.”

Hannah Usadi: “I am rooting for Japan, but I think Brazil might win.”