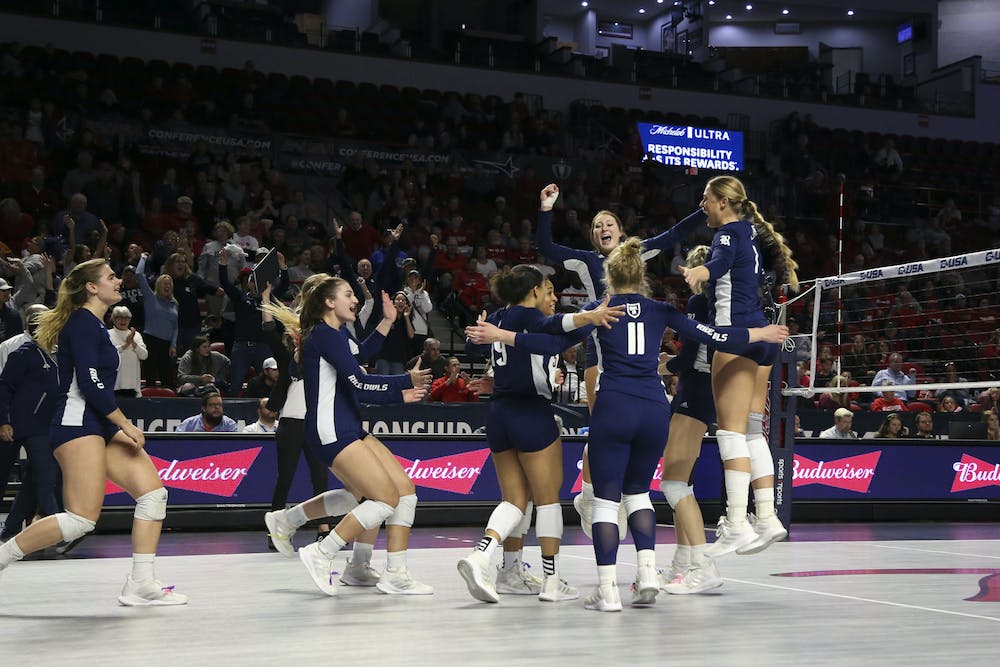 In 2019, the Rice volleyball team took on Western Kentucky University in the Conference USA final only to lose in a five-set heartbreaker. They got another shot at the Hilltoppers in the following year’s title game, and again in 2021, but both times WKU came out on top. Just ten days earlier, while not in the conference tournament, the Hilltoppers beat the Owls in a fifth-set tiebreaker to secure the C-USA regular season title.

Sunday, though, the result was different. The No. 22 Owls finally made it past their conference rival, on the No. 20 Hilltoppers’ home court no less, to secure a conference title for the first time since 2018. After the match, head coach Genny Volpe said that she was thrilled to see her team rewarded for their efforts all year.

“I’m just overwhelmed with joy because this team makes me so proud,” Volpe said. “I'm happy that they're getting to reap the benefits of all their hard work. They have bought in from day one to this program and to each other, and it's just nice to see them finish it off with a championship.”

After WKU withstood a late Rice surge to take the first set 25-22, Rice returned the favor taking the second set in the same fashion and by the same score. The third set was even throughout, but a pair of late kills from WKU’s Kenadee Coyle put the Hilltoppers just one set away from their eighth C-USA championship in nine years.

The fourth set, however, was when the chaos that’s come to define this rivalry over the past few years finally kicked in. Rice maintained a slight lead for most of the set, but a 3-0 Hilltopper run from down 20-18 gave them the lead. After Rice fought back with a 3-0 run of their own, a pair of Owl errors tied the game at 23. An emphatic kill from junior outside hitter and right side Danyle Courtley, who led the Owls with 17 on the day, put Rice a point away from forcing a fifth set, but her ensuing serve hit the net, forcing a win-by-two tiebreaker.

With the set tied at 24, Rice appeared to take the lead when a WKU attempt went long, but a replay review found that the ball had taken a slight deflection from Rice, giving match point to the Hilltoppers. But Rice stayed alive with a kill from sophomore outside hitter and right side Lola Foord, one of four Owls to finish the game with double-digit kills. After WKU’s reigning conference player of the year Lauren Matthews had her ninth kill of the set, the Hilltoppers had Rice at match point again. On the ensuing point, a few Hilltoppers began to celebrate when it looked like Foord’s attempt went out of bounds. But the ref ruled that it took a deflection from WKU, keeping the game alive. Tied at 26, Rice took the point on a kill from junior outside hitter Sahara Maruska after yet another replay review, and Maruska came through again to clinch the set. According to Volpe, the team relied on their experience in big moments to get through the whiplash-inducing match.

“I think that this team really trusted the process,” Volpe said. “We have been in this situation several times, with Western Kentucky of course, but also with other teams in big moments. I just felt like we were prepared for it.”

The Hilltoppers got out to an early lead in the fifth set but it didn’t last long, as Rice went on a 7-2 run behind three Courtley kills to bring the score to 10-7. The teams traded points until the score was 13-11, when fifth-year middle blocker Anota Adekunle forced match point with her fifteenth kill of the day. The Owls had been in a nearly identical situation just over a week earlier, when they were up 14-12 in the fifth set to WKU but lost the next four points as the Hilltoppers clinched the conference regular season title. According to junior libero Nia McCardell, who tied for the game high with 19 digs, last Thursday’s heartbreaker still loomed large over the title match.

“It definitely was on our minds.” McCardell said. “[After] Thursday, we were like, ‘we know what that feels like. We’re back in the same locker room, back in the same environment, we don’t want that to happen again.’ So we were really locked in.”

But this time, Western Kentucky’s Paige Briggs sent an attempt long and the Owls held on for the victory. According to McCardell, the Owls relied on constant communication to stay settled throughout the set.

“It was just a lot of communication,” McCardell said. “[We were] just playing loose and confident in our game, and really giving all-out effort. We took deep breaths, we came in as a team and just really relied on each other during those last few points.”

Fifth-year setter, and C-USA setter of the year, Carly Graham was named the tournament’s most valuable player after a 64-assist and 19-dig performance in the final, while McCardell and Maruska also made the all-tournament team. According to Volpe, their performance this weekend showcased how well-rounded the team is.

“We talked about it all weekend, what makes us unique and special as a team is that we have a ton of balance,” Volpe said. “It was just a total team effort and that’s what we’ve been doing all season – we don’t rely on one person.”

Sunday’s match was the Owls’ last in C-USA, as they’ll move to the American Athletic Conference next year. The Hilltoppers, however, will stay behind in C-USA. According to Volpe, she’ll miss having WKU in her conference since they always force her team to play at their best.

“I think that the Western Kentucky-Rice rivalry has been excellent,” Volpe said. “It’s been one of the best competitive rivalries that I’ve ever been a part of as a player [or] as a coach. I think we respect each other so much, we respect our abilities. We know that we’re going to get the best [from] them, I believe they know they’re going to get the best from us. I don’t think it’s really hit me yet that we’re not going to have this event and we’re changing conferences.”

The Owls will now turn their focus to the NCAA tournament, having earned C-USA’s automatic bid. The field will be announced on Nov. 27 and the tournament will start on Dec. 1.