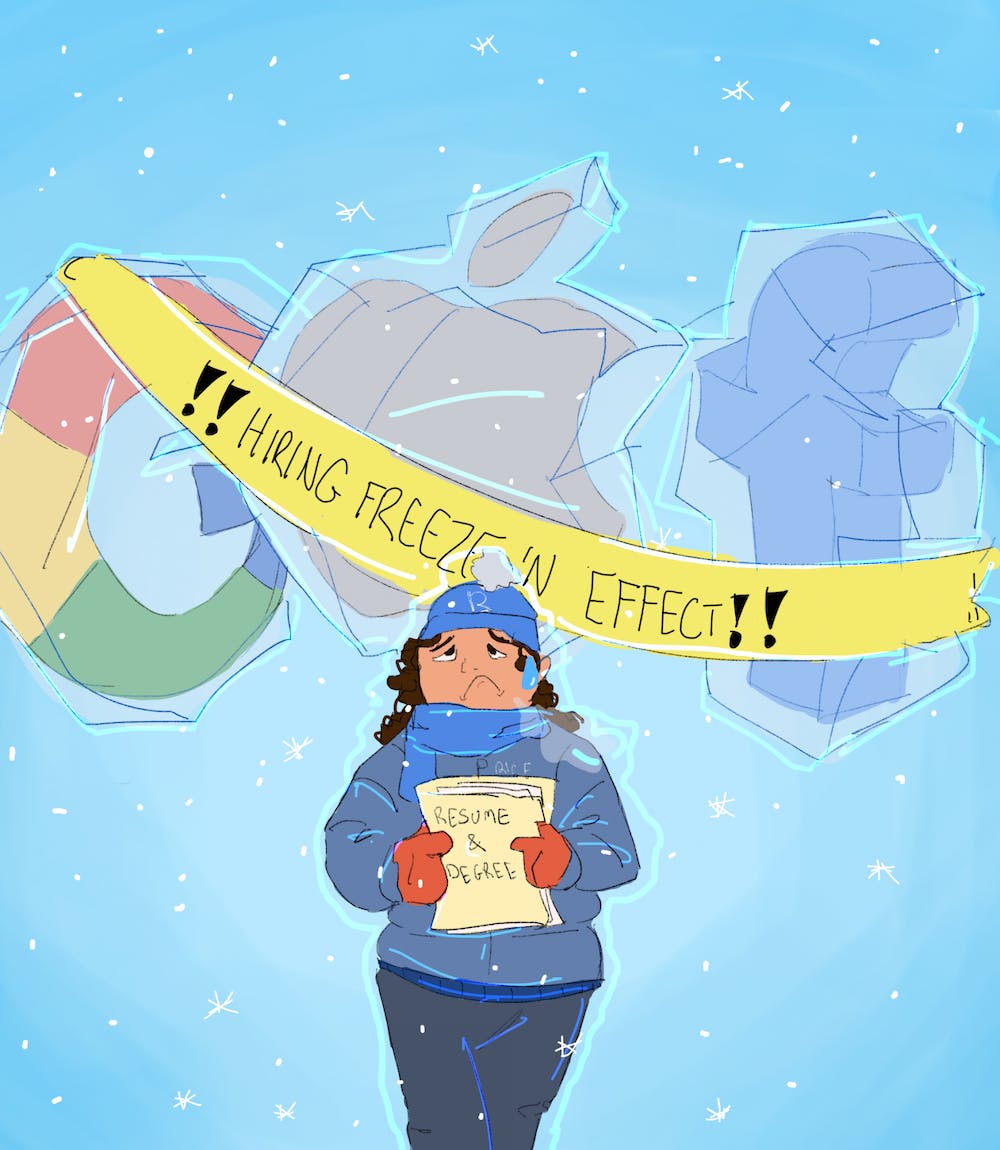 As layoff and hiring freezes increase across the tech industry, computer science students and alumni are among those at Rice expressing concern for their current and future job prospects.

Charles Lussier, a Wiess College senior, said that he has noticed a shift in the recruiting process this year.

“[Internships were] pretty much grooming you and investing in you and planning on giving you a return offer. That [was] kind of the culture beforehand,” said Lussier. “This year is completely different. Internships are no longer a guarantee that you’re actually getting a return offer.”

Many companies have also been firing recent hires from the class of 2022, reducing salaries for mid level positions and instituting hiring freezes across the board. Recent Rice alum Abdelrahman Abouzeid (‘22) was one of 11,000 employees recently let go from Meta.

“Working at Meta/Facebook has been my goal since freshman year, and I only got to spend a few weeks [in the Engineering Bootcamp] at the company before I was laid off,” Abouzeid said in a LinkedIn post. “I honestly enjoyed these last few weeks. I learned a lot, met some very smart folks and pushed code for production.”

For recent international graduates like Abouzeid, the loss of a job also impacts their ability to stay in the U.S. While on the F-1 Visa, individuals have a grace period of 90 unemployment days before they must leave the country.

Companies’ recent hiring freezes and slowdowns are also being seen by students in the recruitment process.

“It’s very obvious,” Lussier said. “All the spots were on the [hiring] portal when we’re applying for stuff, and then they’re constantly closing up. I don’t know if that’s because they’re filling them quicker or they’re just closing them, but I’m assuming they’re closing them in light of the economy.”

Michael Wong, a Sid Richardson College sophomore, said that there has been a general increase in student concern over finding internships in the tech industry, specifically working for one of the prominent American technology companies: Facebook, Amazon, Apple, Netflix and Google (FAANG).

“You definitely see a bit of panic,” Wong said. “We’re just trying to cast a wider net right now and just trying to apply everywhere. I think a lot of people that go into computer science specifically want to work in industry. The mentality is, ‘FAANG, FAANG, FAANG. I gotta work for one of those companies.’ I think at this point it’d be a good idea to maybe not set my sights on, ‘Oh, I’m only going to be happy,’ or ‘I’ll only feel like I’ll be fulfilled if I work at one of those companies.’”

Ann McAdam Griffin, director of employer relations at the Center for Career Development, said that while there has been a slowdown in the tech and software industries, overall job outlook for the Class of 2023 is still very optimistic.

“The skills and competencies that a student with a major in computer sciences develop are sought after by a wide variety of industries, not only tech,” Griffin said. “Students at Rice, in computer science and all majors, have options for meaningful, challenging career opportunities.”

CCD wait times for advising appointments are currently two weeks, up from the usual one week for this time of year, according to Griffin.

Griffin said that the CCD has seen students concerned about their alumni friends who have been affected by these layoffs and how the hiring freezes might impact their post-graduation plans. Lussier said he empathizes with those who happen to have graduated or are graduating at the wrong time.

“I mean it’s just really unfortunate because when I think of these upperclassmen, it’s like they did nothing wrong,” Lussier said. “They grind their asses off. They were really good students, and they literally were only laid off because they just happened to be in the bottom rung of things and are recently added while the economy took a shitter.”

For some students like Wong, the current outlook raises some concern for the future.

“I think in like one or two years it’s going to be kind of tough because I think my fellow students [and I] are going to be in a situation where we’re competing for an increasingly scarce number of opportunities,” said Wong. “It is sort of a very sobering moment. Obviously I enjoy computer science. But I’d also like to make a living.”

“Eventually when I am a recent grad, I’ll be the last to be hired and the first to be fired,” Cole said. “It’s kind of upsetting because I decided to study computer science because of job security, but now it’s not a secure job.”

Some foresee a change in the number of students majoring in computer science.

“I think it’s going to be pretty obvious in the next few years that COMP is not gonna be as in demand, and I think the major is gonna drop significantly,” Lussier said. “More people are going to channel into government roles with software engineering, along with research just because it’s generally more stable.”

Griffin said that the CCD is always available for students alongside a myriad of resources on Handshake.

“We advise students not to be alarmed by ebbs and flows in certain industries because the market for early career talent is strong,” Griffin said. “Continue to build your network and come see the CCD.  This is a demanding time in the semester, but we’re open and see students for in-person and virtual appointments throughout winter break.”

Although the recent changes in the job market are uncontrollable, Lussier said he believes Rice students are capable of making it through.

“I would caution all the younger generations, as well as the senior class, to be prepared to get fired,” Lussier said. “I think that’s going to happen to most of us, but we should not fret because at the end of the day, we can get up off our feet … It’ll be harder than before, but not impossible.”