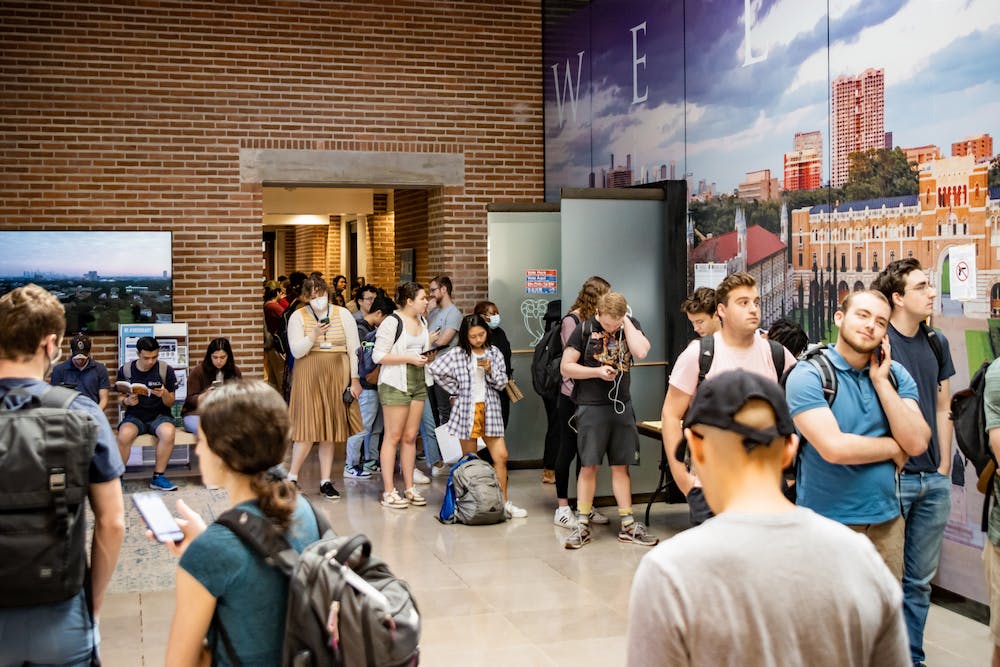 Rice’s Sewall Hall served as an Election Day voting location for around 900 voters on Tuesday. According to Vivian Zheng, the presiding election judge, people waited in line for one to two hours before casting their ballots, though wait times dropped off significantly as it got closer to 7 p.m.

Zheng, a Baker College junior, said that she knew there would be lines but wasn’t sure how long they would be.

“I feel like it’s kind of hard to expect how it will be [in different elections],” Zheng said.“I knew the lines would be crazy … but definitely not to this extent. But we haven’t had any major issues, like no technical issues, which is so good. That’s the most we can ask for.”

According to Zheng, the lines were exacerbated by the length of Harris County’s ballot — one of the longest in the country — and the lack of voting equipment at the location.

“People are taking their time to vote, which is very understandable,” Zheng said. “But because of the length of the ballot, it just takes longer for each person to do everything, and then also we don’t have enough equipment. That’s just the reality of it.”

Of the people that took advantage of the voting in Sewall, most chose to do so because of its location. Eliot Solomon, a McMurtry College senior, said he appreciated the location’s proximity to his classes.

“I feel like the location is good, and the wait is a little longer, but seems pretty standard [in comparison to my previous voting experiences],” Solomon said. “It’s really nice to be able to walk out of class and come vote.”

Other students, like Katie Impelman, a Will Rice College junior, heard about the lines but decided to risk the wait anyway.

“My friend said that he waited [to vote at Sewall] for an hour and a half this morning,”

Impelman said. “I considered voting in the medical center, but I thought the line would be longer [there] than here.”

Some students, such as Ryland Urbanczyk, chose to vote at Sewall because it was the only location they knew about.

“I really [wanted] to vote, and [Sewall] was the location my friends told me about and the only one that I really knew,” Urbanczyk, a freshman at Hanszen College, said.

The lines at Sewall held more than just members of the Rice community. Nathan Drake, who lives near campus, said he chose to vote at Sewall because of its proximity to his house. Others, like Tung Shu, a physician who works in the Texas Medical Center, said that all things considered, the experience could have been worse.

“[The Sewall location] is very convenient. My office is literally across the street,” Shu said. “[I] expected some line, but it’s not bad … Also it’s inside, it’s got AC. [I] can’t complain.”

According to Zheng, the long lines were an encouraging sign for democracy, but  she and the other judges did try to urge people to seek out other voting locations to keep the lines as short as possible.

“The lines are good, because it’s showing that people are coming out to vote,” Zheng said. “We have been encouraging people to try to find other polling locations that are closer to campus … and I do think people [took that] advice.”

One of those people was Elysia Wu, a Lovett College senior, who intended to vote at Sewall but heard about the long lines and decided to vote at Congregation Emanu El, a voting location across the street from campus on Sunset Boulevard.

“I was actually planning to vote on campus, but I bumped into a friend who told me about a shorter wait time [at a different location] so we both went off-campus together,” Wu said. “All in all, it probably cut my wait time in half, even with the 10 minute walk.”

In all, the attitudes of most voters at Sewall were summed up by Emily Searles, a graduate student in the Chemistry department.

Maria Morkas and Bonnie Zhao contributed to this reporting.