Review: ‘The Family’ is an exciting and messy exploration of the dissolution of BROCKHAMPTON 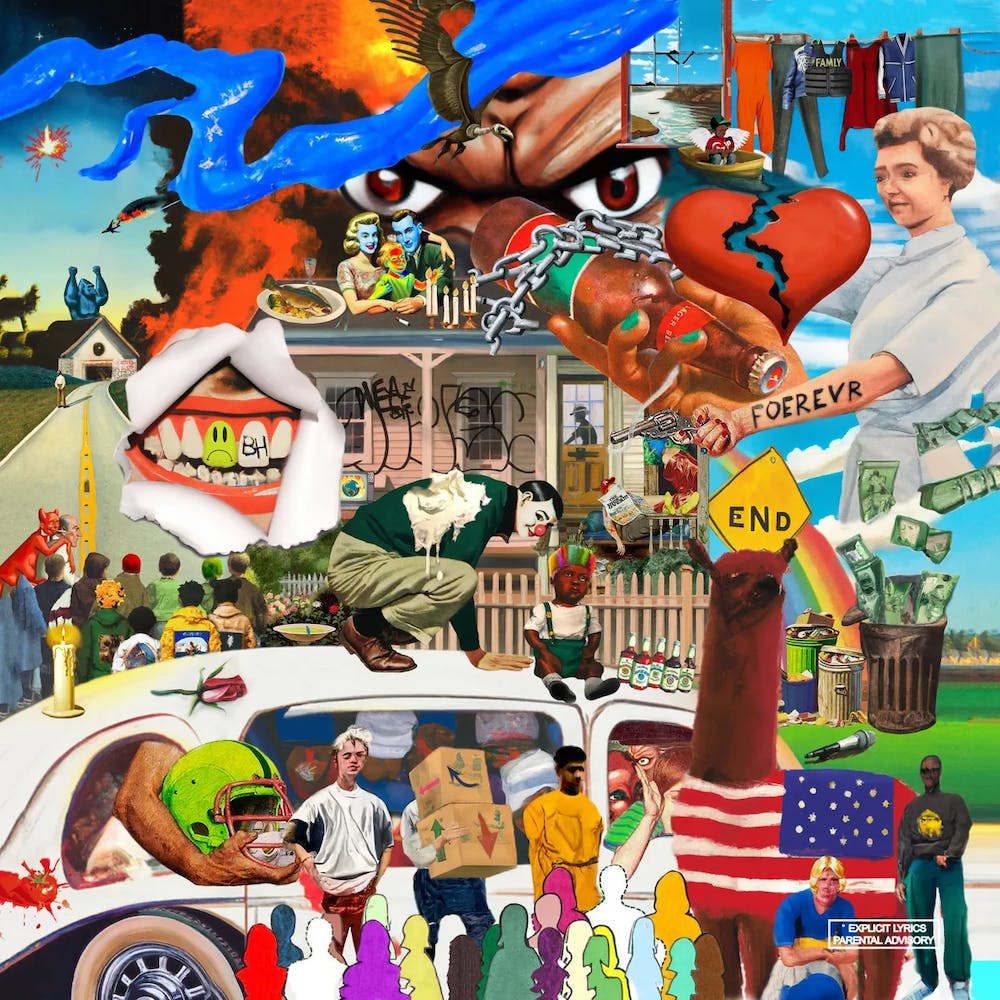 Most bands do their farewells together, with all of the members contributing to a final goodbye. BROCKHAMPTON is not like most bands. Instead, they opted for a Kevin Abstract solo project that reflects on the band’s history and how they broke up. Dirty laundry is aired and personal encounters are recounted for listeners from the perspective of Kevin Abstract, the member who started the group. While this singular topic can seem cumbersome at times, the album succeeds in creating intriguing sounds and styles to shove the listener into Abstract’s mindset at the end of his journey with BROCKHAMPTON.

Sitting at 17 tracks in just 35 minutes, “The Family” moves quickly through ideas, some of which could benefit from further expansion. Early on in the album, Kevin draws parallels with himself and RZA, leader of the Wu-Tang Clan, in the aptly named track “RZA.” He laments his inability to keep the band together like RZA did with the Wu-Tang Clan, which has been around since 1992. The song uses an almost jaunty instrumental based on vocal samples that layer nicely with Kevin’s lyrics.

“Gold Teeth” features one of the most interesting instrumentals on the album: a low vocal loop that creates an eerie feeling that pervades the track. Kevin tells listeners, “Only made this [album] to get out the deal, partly / So don't ask me if the crew is still talking.” This line alludes to their RCA contract — the band could not have broken up without one last album. He then addresses how the band no longer spends time together while reflecting on the music they’ve made together.

The first single from the album, “Big Pussy,” has an unhinged energy throughout that complements the bass-heavy instrumental. Kevin addresses the band’s breakup and their lack of appearance on their ‘last’ album with his line, “The group is over without being on the album.” The track then changes to a more relaxed instrumental and flow that is a nice breakdown from the peak energy and anger earlier on the track.

Another highlight of the album is “Good Time,” a reflective track that uses choral-sounding samples to create a certain gravity that elevates the sound. The song begins by reflecting on the end of the group and the dissolution of the members’ closeness before moving to thinking about the “good times.” Kevin’s melodic bridge carves out another dimension in the track. It ends with Kevin addressing his own toxicity, having tried to film personal interactions within the band to create “art.” By mentioning this aspect, he acknowledges his own part in adding to the stress that caused the band’s implosion.

One of the most striking tracks on the album is the brief “Any Way You Want Me.” A quick and meaningful track that talks about changing for other people, it has an addicting chorus that works nicely over the sparse instrumentation. It is likely that the track references the division within the band and can serve as a desperate plea to bring the group back together by changing to fit what every member of the band wants.

“The Ending” uses a strong sample from Willie Hutch’s song “Let Me Be The One, Baby” to create a dense instrumental similar to the style used in Kanye West’s early music, a fitting penultimate track on an album about a band that met on a Kanye fan forum. The production combines with lyrics about the beginnings of the band and where they ended up to create an enjoyable track.

Although not technically BROCKHAMPTON’s final album after the surprise drop of “TM” later in the day, “The Family” is a more fitting ending for the group with its reflective lyrics and exciting production. The idea of having the founder of the band create a retrospective on the group can seem a bit one-note at times but largely works to produce a compelling album.