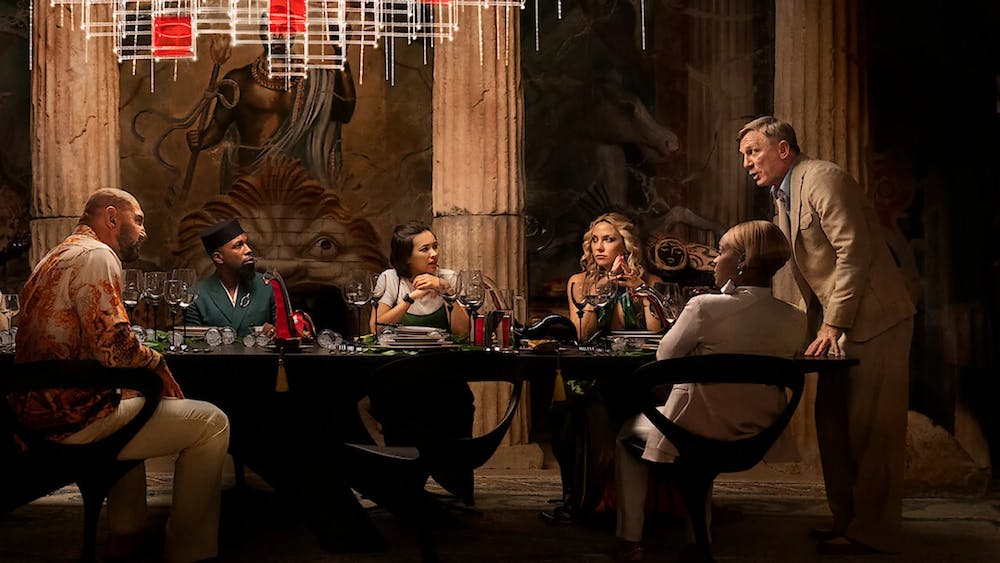 The mystery this time around once again features southern super-sleuth Benoit Blanc (Daniel Craig) as he is invited to participate in a murder mystery game held by tech billionaire Miles Bron (Edward Norton) and his close friends. Blanc finds himself surrounded by the uber-rich and has to navigate the intricacies within the friend group that surrounds him. From the premise alone, it is clear that the film wants to separate itself from the original through its scope. Rather than focusing on a microcosm representative of society, the film focuses on creating more direct parallels to our current society. This decision not only allows for more ridiculous setpieces and reveals but also makes the social commentary much more biting. While maybe not as effective or subtle as the original, the film is certainly more focused on its critique of American wealth, which gives the otherwise straightforwardly entertaining plot a nice edge.

Some may take issue with this decision to amp up the stakes and circumstances of the franchise, but the film never took itself seriously enough to make some of the more ludicrous plot developments problematic. Where “Knives Out” subverted the structure of a whodunnit by making a suspect the protagonist, “Glass Onion” subverts by heightening the elements at the core of the subgenre. This decision makes the film more predictable than the original but more immediately fun to watch unfold and ride along with.

What makes these changes work, though, are the actors. Every single person in the cast gives a performance perfectly aligned with the larger-than-life characters that the script prescribes. Daniel Craig’s accent work and cadence once again make him stand out, and Edward Norton portrays the faux-hipster characteristics of the out-of-touch tech billionaire incredibly well. Dave Bautista and Kate Hudson provide excellent comedic relief while remaining somewhat sinister, and Janelle Monáe gives a remarkably balanced performance throughout.

At the end of the day, though, the only word that you need to describe “Glass Onion” is fun. The film is one of the most entertaining I’ve seen all year, and Johnson’s willingness to attempt new ideas in a genre that has been seemingly “figured out” is very commendable. The decision to make the film more exaggerated may upset fans of the original, but to me, this decision created a film that is an excellent alternative. I don’t know if I enjoyed this more than the original, but it does enough differently and executes those changes so well to where I feel no need to pick favorites.