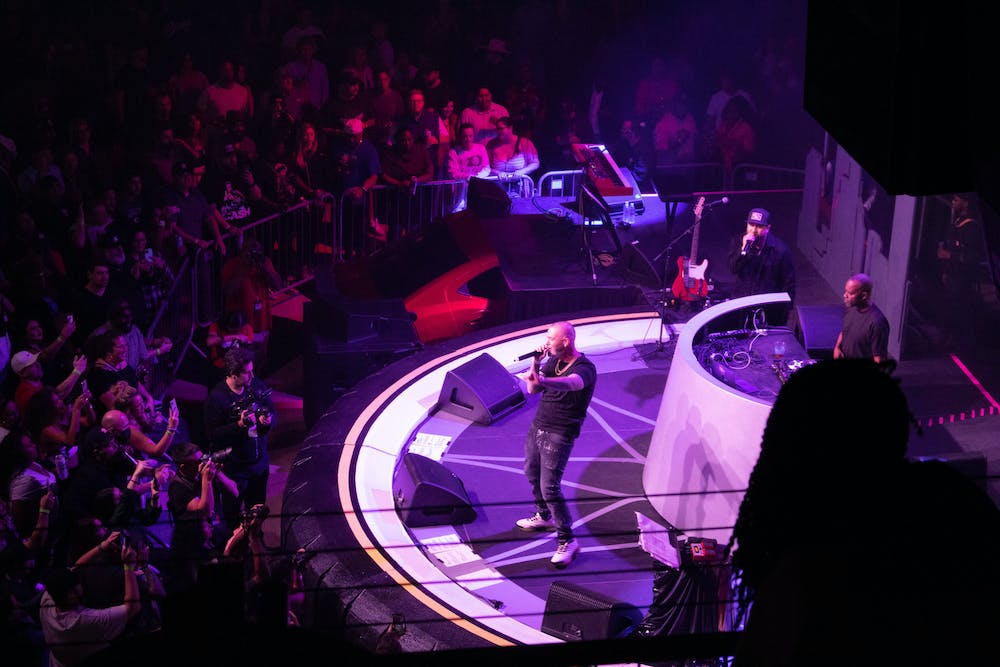 The concert itself was unlike any other I’ve been to, though I suppose that’s to be expected at a battle-of-the-bands-esque show. One of my favorite parts of the night was watching the artist not performing react to their counterpart, whether that was Clark swaying to Wall’s rhymes or Wall singing along to Clark’s cover of The Beatles’ “Come Together.”

The competition itself was certainly entertaining, but at times it tried to do too much. The takeover round, in which an artist began playing one of their songs before the other took over halfway through, was only memorable because I got to hear Paul Wall sing. The clash round, where they played their own songs in different musical styles, was largely forgettable, aside from Wall’s performance of a slow, country-ified version of “Swangin in the Rain.”

Competition-induced mediocrity aside, the concert was incredible. Clark is a guitar wizard, and watching him perform live was nothing short of remarkable. Wall, for his part, performed all of his classic songs, and brought out a number of Houston rappers as surprise guests, including Maxo Kream, Lil Keke, Big Pokey and Slim Thug. At one point, after Clark brought out his second guest on only his fourth song of the night, Clark threw his hands up in “frustration,” as if Wall’s guests would give him an edge in the theoretical competition that was taking place. I say theoretical because no winner was announced, though Wall did state “there’s no way I won that” after the last notes had been played.

Still, the best part of the night by far happened during Wall’s last song. During his verse in “Still Tippin,” the speakers on Wall’s stage cut out and the background music stopped. After a momentary pause, in which the DJ shrugged in confusion, Wall turned back toward the crowd and began rapping a cappella. The crowd joined in instantly, providing a beautiful moment of Houston rap community on which to end the night. For that moment alone, despite Clark musically wiping the floor with Wall — an assertion to which I’m certain Wall would not object — I think it’s only fair to declare Wall the winner of the SoundClash.