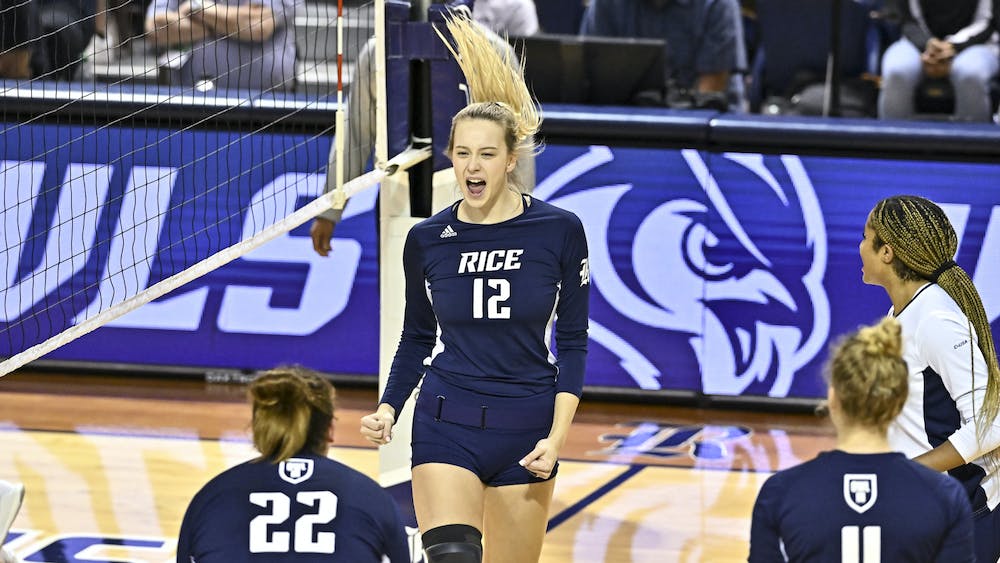 Head coach Genny Volpe said that the team’s focus and drive on Sunday’s game is attributed, at least in part, to Senior Day and the lasting impact of the senior players, specifically the team’s fifth-year seniors, setter Carly Graham and middle blocker Anota Adekunle.

“Usually on Senior Day, it’s a pretty focused day. The team has no problem getting motivated to play for their seniors, especially this group of seniors,” Volpe said. “We’ve been very successful over the last five years. Carly and Anota helped start that tradition of success — they just are winners. They came in and made an immediate impact [as freshmen].”

Rice started off running, taking the first set 25-12 and the second 25-13. LA Tech came out fighting in the third set, holding an 8-6 lead, but the Owls went on a 7-1 run to reclaim the lead and complete the sweep with a 25-15 third set victory.

Graham, who led all players in the game with 35 assists, said that the team was satisfied with their victory.

“I think we all felt really good about it,” Graham said. “We were just having fun. That was one of our biggest goals, was just to go out there and have fun.”

Adekunle also said that another one of the team’s goals this season has been to build their group dynamic.

“That’s one thing that was really big for us as well — just making sure we have team chemistry,” Adekunle said. “The bond we’ve built already is just amazing [and] unbreakable. So it’s always great to go out and know that we can count on people and have each other’s backs always.”

Amid the team’s recent sweeps, Volpe said she hopes to keep up this momentum in the coming matches.

“We’ve swept the last few matches, so that means we’re playing pretty clean volleyball … Western [Kentucky University] is next, and that’s going to be a huge game. It always is, and it’s at their place,” Volpe said. “So that’s a tough place to play, but we’re playing for a conference championship.”

The team has two more matches on their regular season schedule and will need to win both games to earn a conference regular season title. Their next game will be against No. 22 Western Kentucky University on Nov. 10 at 6 p.m.

“We really try to take it one day at a time, one match at a time,” Volpe said. “I think if we can continue to keep that focus, then things are looking pretty good.”