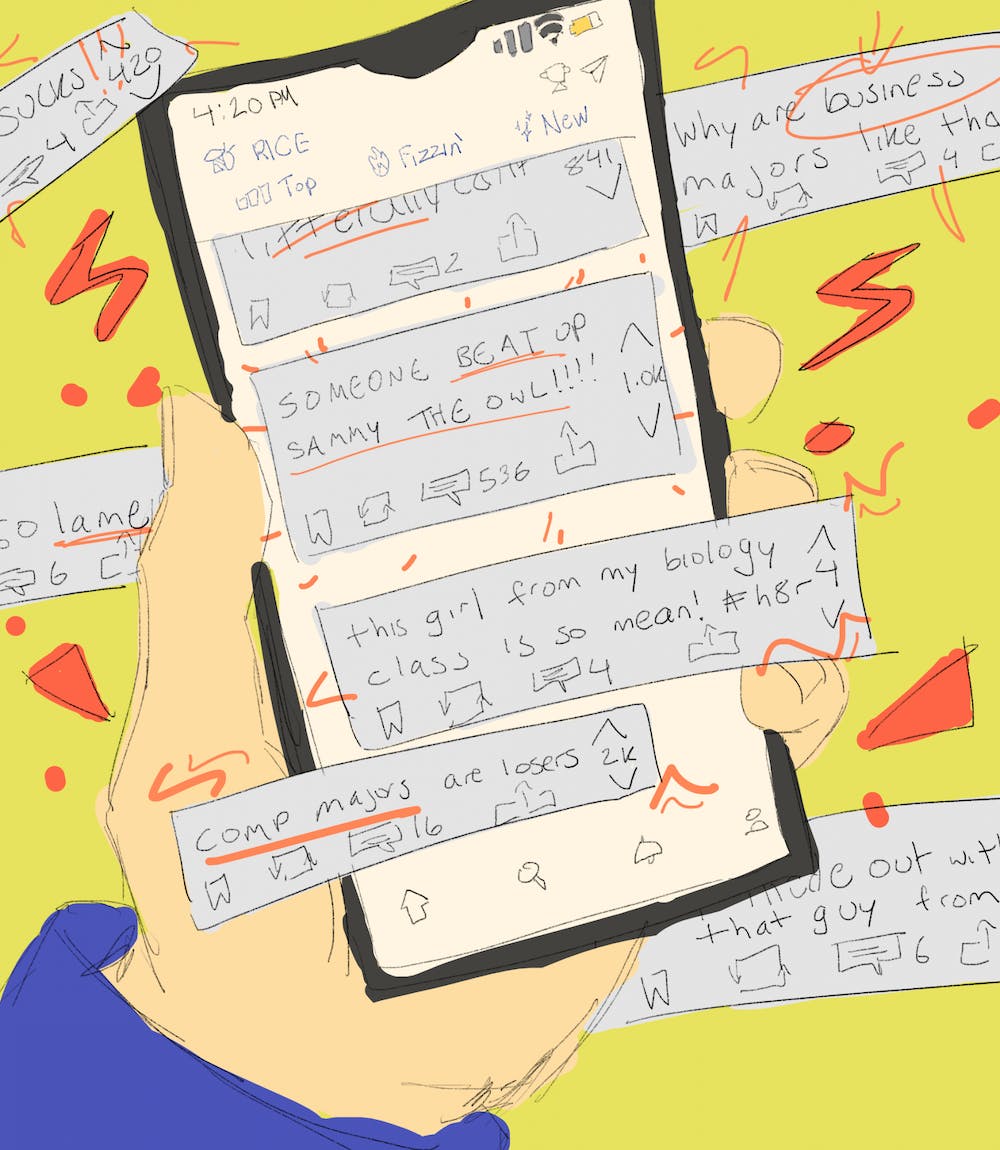 Fizz, an anonymous social media platform created by two Stanford University dropouts and currently catered to universities, launched at Rice on Aug. 27 and has since generated mixed reactions amongst the student population.

Teddy Solomon, the co-founder and COO of Fizz, said that Rice is the seventh university at which Fizz has launched. According to Solomon, Fizz became popular at Rice in a matter of days.

“We’ve seen that the number of daily active users [at Rice] has been growing since the launch and has never taken a downturn,” Solomon said. “In a matter of 48 hours, [Fizz] took over.’”

“I spent the entire pandemic on Instagram, watching everybody’s amazing lives. But here I was stuck in my room. And [social media] was not representative at all of my own life,” Solomon said. “We wanted to create the platform that everybody around us was asking for. And they were asking for a platform that was authentic … a space to express your thoughts and be able to connect with the community.”

Solomon said that anonymity is key to Fizz’s mission.

“Right when you strip away that name, you’re able to be your authentic self. You’re able to actually express yourself, and it removes the social anxiety that comes with everything,” Solomon said. “Growing up in such a technological age, we’re naturally and justifiably anxious and very socially anxious, and [Fizz] allows us to have enough authentic space where your name’s not attached.”

Daniel Cho, a McMurtry College senior who has been frequently name-dropped and discussed on Fizz, wrote to the Thresher that anonymity can be a source of misinformation and negativity.

“I’m alright with posts that tease me that are made by people I know, since they’ll usually come up and be like, ‘Hey guess what — it was me again, haha, hope that’s alright,’” Cho wrote. “I think intent matters a lot … So it’s when people that I don’t know start jumping on that train that it becomes something I’m not as happy with.”

Cho said that though he enjoys Fizz and thinks it is a fun platform, it is problematic in a lot of ways.

“I have noticed some of my friends that have been mentioned on the platform feeling an immediate feeling of fear and resentment … I don’t think I’ve ever seen someone feel positively about being mentioned on Fizz,” Cho wrote. “I would not, however, consider posts about me bullying. Bullying to me requires clearly malicious intent … It’s a lot more likely to be the product of a herd of people just dropping the most interesting thing they can think of, the first thing they can remember without fully realizing the negative consequences of doing so.”

Solomon said that having moderators was their top priority from the start. Fizz’s staff trained moderators to identify and delete bullying, doxxing, hate speech and other offensive content.

Moderators on Fizz are university-specific and solely consist of students of that university. Solomon said moderators’ goal is to protect the individuals within the community and make sure that Fizz is a positive and uplifting space. To do so, moderators remove posts from the feed that are violating the guidelines, and they also utilize Fizz’s report system to identify offensive posts.

“[Moderators] were the first people that we recruited on campus,” Solomon said. “We’ll reach out to them online, we’ll go through an interview process and we’ll pick people who are going to moderate really objectively that are not going to inject their beliefs or whatever it might be into the platform, but people who are going to uphold the guidelines to the fullest extent.”

Clara Ursic, who’s mentioned as a “lovely face” on Fizz, said she has mixed feelings about seeing her name being mentioned.

“I was initially convinced it was just friends of mine that were trolling me. But I asked all my friends who have Fizz, and they all told me they didn’t write it,” Ursic, a McMurtry junior, said. “It was just funny, mostly … But it was kind of unsettling when I think one of the comments on a post said, ‘drop the Insta’. It was just weird to think that random people walking around Rice are talking about me. But I guess it’s better [than] a rude comment.”

Ursic is also an employee at Coffeehouse, the student-run business that has recently been the target of many Fizz posts criticizing its alleged poor management, long wait times and unprofessionalism.

“Again, just scrolling through, I thought it was funny and kind of absurd,” Ursic said. “But then later that night, I actually had a Chaus shift, and as I was taking orders. I just couldn’t stop thinking about it — about, ‘Oh, this person that’s ordering the latte right in front of me and smiling at me could possibly be thinking all this horrible stuff about us.’ So I started feeling really self conscious. I was hyper aware of how efficient I was when grabbing stuff.”

Ursic said that some of the criticisms on Fizz are valid critiques, but they can also be discouraging and dehumanizing.

“There are definitely things that we could improve on. It wasn’t completely unfounded criticism on Fizz,” Ursic said. “But the one that really got me was, ‘The incentive is not to get fired, you lazy shit’ … The fact that it had 300 upvotes was insane to me.”

According to Ursic, Coffeehouse should not be compared to businesses such as Starbucks, and she hopes her peers recognize Coffeehouse employees are just students.

“It just gives off this impression that they’re expecting us to just be machines to make their coffee immediately … There was someone complaining about how we talk too much [among] each other, and we’re having too much fun,” Ursic said. “It’s just a little bit ridiculous. This is supposed to be our own fun coffee shop where you show up with fun hats and good vibes, and drinks are half the price of Starbucks, you know.”

Rice’s Fizz content took a shift from jokes and memes to political discussions around the time of the midterm election. According to Solomon, Fizz is extremely apolitical across communities on the app, but he’s glad to see Fizz be an authentic space for authentic conversations that don’t happen in real life.

“There’s hard conversations that might not happen because of the stigma that exists in real life surrounding political debate,” Solomon said. “They can happen on the platform, and we welcome that.”

However, some recent Fizz content has also been criticized by users as being racist, antisemitic and fatphobic. One Fizz post currently with 438 upvotes reads, “... for all girls out there being overweight is number 1 bolder underlined turn off it’s just the truth not fatphobic.” Another reads, “Fatphobic is part of evolution no dude wants a fat pig as a wife. It is literally in our genes.” At the time of publication, these posts are still undeleted.

Antisemitic content included posts and comments such as “Jews been getting babied like a mf all last month I’m lowkey tired of hearing that shit,” in addition to posts and comments promoting conspiracy theories claiming Jewish people “control the US.”

Natasha Patnaik, one of the two coordinators for diversity facilitators, said that for these particular posts, anonymity is clearly being misused in order to spread hate speech.

“The antisemetic and racist posts recently made on the app are entirely antithetical to Rice’s Culture of Care,” Patnaik wrote in an email to the Thresher. “As a student body, we should be striving to foster inclusivity and respect both in-person and online … We hope people consider: is using Fizz worth sacrificing our Culture of Care.”

Ursic said that she thinks there is no perfect solution to the negatives of Fizz.

“I think with Fizz as an anonymous app, you can’t eliminate the downsides of it … without also eliminating the upsides,” Ursic said. “I honestly just think it boils down to the actual people using it. And I guess I had a naive assumption going in … that everyone around me is just really kind and open minded and caring … [Fizz] slowly made me realize that not everyone around me necessarily thinks like that.”