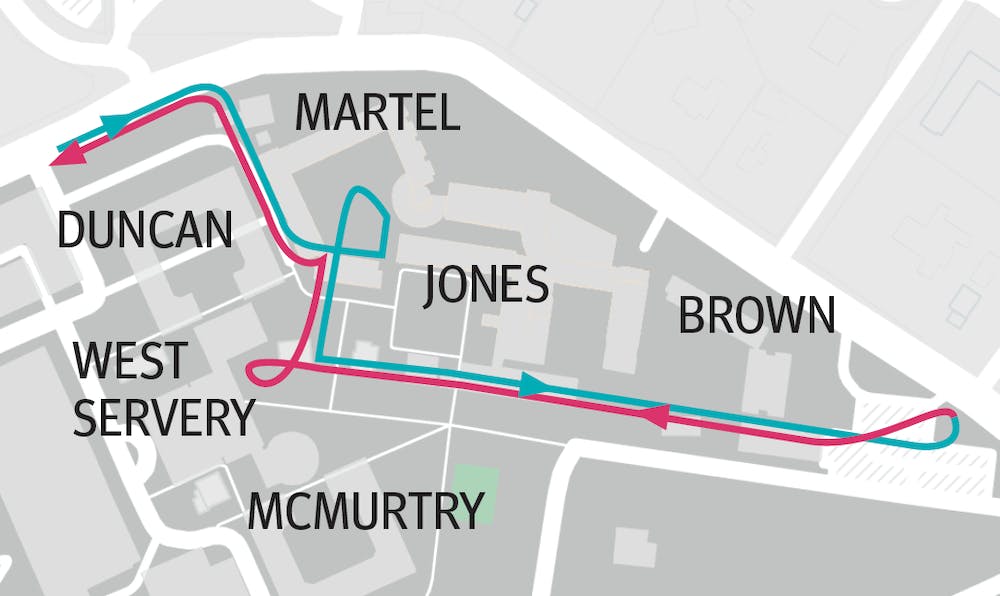 An unidentified driver was reported for reckless driving on campus and in the surrounding areas off-campus just before midnight on Friday, Oct. 28.

“We were in one of the Martel [College] classrooms, probably for most of Friday night, and … we saw a white car pass in front of Martel,” Cha said. “We didn’t really make note of it because sometimes parents during family weekend will get confused … We saw the same white car pull up into Martel quad … So we were trying to help her get out.”

According to Bannis, the driver, who did not seem Rice-affiliated, was speeding and primarily driving on the sidewalks.

After driving into the Jones quad, the driver appeared to exit campus, but then quickly returned, heading towards West Servery, according to Bannis and Cha, who watched from Jones.

“We see headlights come back down the road toward us, [and] it’s the same car,” Cha said. “One of the people from our group stands smack dab in the middle of the sidewalk saying, ‘There [are] people here, you can’t come this way.’”

According to Bannis, the driver did not stop for the student standing directly in the car’s path, who got out of the way as the car approached West Servery. Although the car did not crash into West Servery, Cha said that she and some other people called the authorities.

“She was sitting in front of West Servery. That’s when people started to run up to the car to get license plate information and talk to her and ask her if she’s okay,” Cha said. “At this point, I had already called [Rice University Police Department]. Two other people had already called RUPD, and someone else called 911.”

Despite the driver’s recklessness, no students appeared to be injured, according to Bannis.

“There were multiple people she almost hit, but thankfully, no one looked hurt,” Bannis said. “It was very concerning that she was going the speed [that] she was in a university, knowing that, even if it was nighttime, there [were] people still out.”

Patrol Sergeant Maritza Lopez said that RUPD received a report of reckless driving but could not locate the driver or the vehicle.

“It was a report of a reckless driver,” Lopez said. “However, that driver or that vehicle was never found. We had several units check ... We searched for about half an hour.”

According to Lopez, the Houston Police Department had also gotten involved but was equally unsuccessful at locating the car.