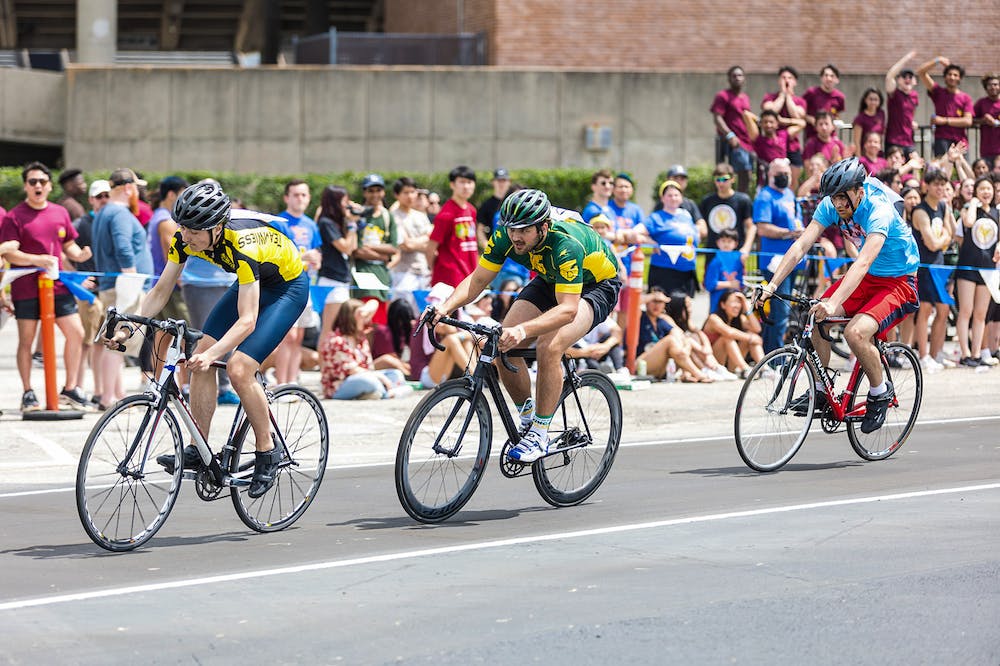 Despite previous conversations to move Beer Bike to avoid overlapping with Ramadan, during which those participating abstain from eating or drinking during daylight hours, the date is now finalized as the original April 1 date.

The proposal for moving the date was originally made by Rice Program Council  chairs last month but was denied in favor of the original date following discussions with Rice administration.

The final part of the decision-making process involved a track walkthrough with administration, during which the RPC representatives were told the accelerated timeline would not be possible due to track safety concerns, according to the campus-wide Beer Bike coordinators.

“We had a track walkthrough first where we discussed the move with [administration], during which we were told that there’s no safe way for [us] to move the day up because of all the necessary track repairs, which would require more time to complete than a March Beer Bike date would allow for,” Anne Wang, one of the two campus-wide coordinators, said.

Besides concerns that track repairs cannot be made in time for a March Beer Bike date, there are several other reasons why the change in dates did not occur. An email sent out by Wang and Nayna Nambiar, the other campus-wide Beer Bike coordinator, cited concern regarding competition with the Rodeo for vendor supplies, such as guardrails, as a potential complication.

“We realized that the vendors that we were using [for the March date] coincide with the same vendors that the rodeo uses,” Wang, a Lovett College sophomore, said. “Because of this, we would be competing with the Houston Rodeo, and it could limit how much fencing we can actually get during that time.”

Mahmoud Al-Madi, the Jones College Beer Bike captain, said that he observes Ramadan every year. Last year, when Saturday’s race also fell during Ramadan, he said he was unable to eat sufficiently before the race.

“On the day of the race, I found it very hard to fast,” Al-Madi said. “I woke up in the morning to prepare all the bike team logistics for the race, and by the time we were out on the track, we spent a couple of hours waiting for the race, and it was really hot.”

Ultimately, Al-Madi said he made the decision to eat shortly before the race so as not to risk his health and passing out during the race itself.

“I laid down for a bit, but I personally made the decision to cheat [on my fast] as to be able to race,” Al-Madi said. “It was just 20 minutes before the race when I was lying down, unable to stand up without feeling weak, so I decided to eat something.”

Daanish Sheikh, a member of the Brown College Bike team and observer of Ramadan, said that fasting on the day of biking can put him and other Muslim bikers at a distinct disadvantage on the day of Beer Bike.

“Biking last year was particularly difficult because I was fasting the morning of the race,” Sheikh, a senior, wrote in an email to the Thresher. “Not only do I feel that Muslim bikers can be at a disadvantage when biking, but racing makes completing the fast significantly more taxing throughout the rest of the day.”

RPC President Ryann Tudor said that while she is disappointed the move is not possible, she understands why the administration decided to veto the decision due to safety concerns.

“While I do understand the reasoning behind it being moved and that it’s for the sake of safety and a lot of other factors that we really can’t control at this point, it was really disappointing to hear the news that it couldn’t be moved, knowing that was going to affect the population of Rice that does practice Ramadan,” Tudor said.

Ambreen Younas, co-president of the Rice Muslim Student Association, said that although she understands the logistics of the date change would be hard to coordinate, she is ultimately disappointed that the week was not moved.

“I personally think the reasons cited for not moving the date could have been overcome and are not really obstacles, or should not be prioritized over Muslim students,” Younas, a Lovett College senior, said. “Ramadan is one of, if not the most, holiest times for Muslims, and having a respectful campus environment for this would have been best. Furthermore, lots of Muslim students will now have to be excluded from one of the biggest events at Rice.”

Al-Madi said that he is fine with the decision not to move Beer Bike because, to him, Ramadan is about adjusting to the world around him. He said that he is glad to be able to participate in the week’s events whether or not it happens to fall during Ramadan.

“The idea [of celebrating Ramadan] is to go through a little bit more hardship and to be able to resonate with people who are struggling, so not having the date of Beer Bike moved is not something I am personally upset with,” Al-Madi said. “Ramadan isn’t about changing the schedule of the world around you. It’s more of keeping up with it while experiencing that extra bit of hardship and kind of becoming better through growing through that struggle.”