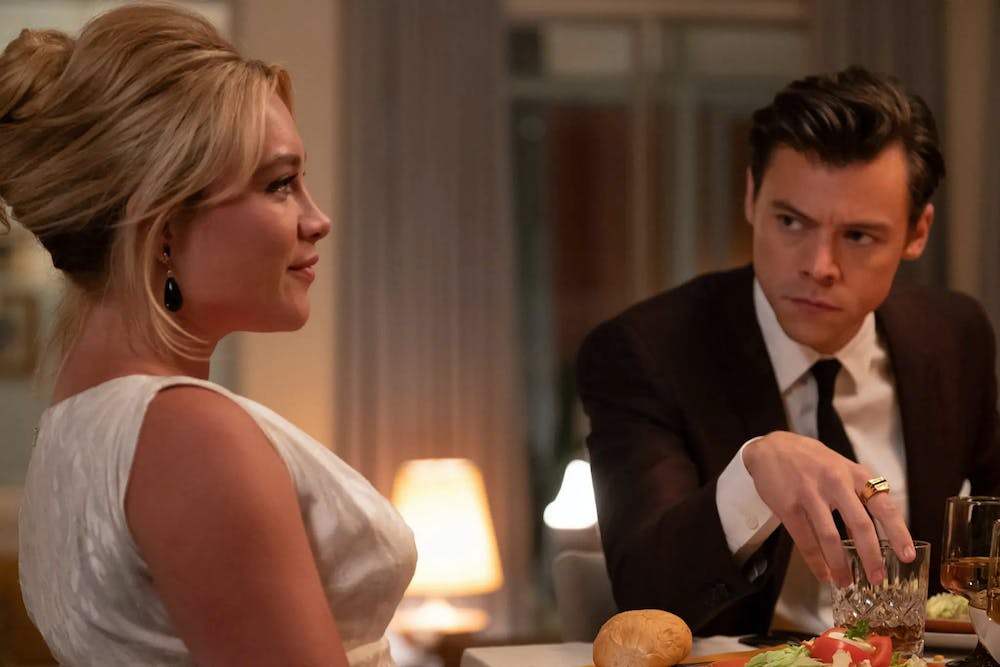 “Don’t Worry Darling” centers around Alice (Florence Pugh) and Jack (Harry Styles), a young couple in a seemingly idyllic 1950s suburban town called Victory. While Alice stays at home as a housewife, Jack goes to work on the Victory Project (think  the Manhattan Project) led by the charismatic, cult-like leader Frank (Chris Pine). Every evening, the couple spends time together and socializes with the other couples in the neighborhood. However, strange phenomena soon begin to occur, leading Alice to question the nature of the town they live in, what the Victory Project is actually doing and why she keeps having visions of a different world.

This film is gorgeous throughout, and director Olivia Wilde has a knack for capturing shots that truly stay with you after the credits roll. Every frame feels lush, and repeated motifs throughout contribute to the nagging feeling that although everything appears wonderful on the surface, there is something much more sinister afoot. Wilde does an excellent job of creating a sense of claustrophobia for the audience, which reflects the closing walls Alice begins to find herself in.

In that vein, this film is carried by  Florence Pugh’s magnificent performance as Alice. Her charisma leaps off the screen and she skillfully conveys the horror of the situation. Additionally, Harry Styles puts in a solid performance, at times going against his public persona and typecast. Chris Pine also does well for the most part as Frank, but his execution of the cult leader role by the end of the film feels somewhat generic.

Though all this appears to set up a great film, the first two acts are too plodding and feel excessively indulgent in the beauty of the world created. At points during the second act, the film almost feels too boring to watch, as the same themes are repeated without any novelty in their presentation.

However, near the end of the second act, the film makes the revelation of what is happening to Alice. From that point, it’s as if I was watching a completely different movie. The final third of the film is engaging, sophisticated and most importantly gets the film’s message across. I truly urge you to avoid spoilers so that you can have that same gasp that I did when I watched this movie for the first time. After seeing the third act, my opinion on this movie totally changed and I left the theater with a sense of satisfaction and relief for the main character.

All in all, “Don’t Worry Darling” is a great movie to see in theaters, and though it does require some patience through the first half, the conclusion makes the film well worth watching.