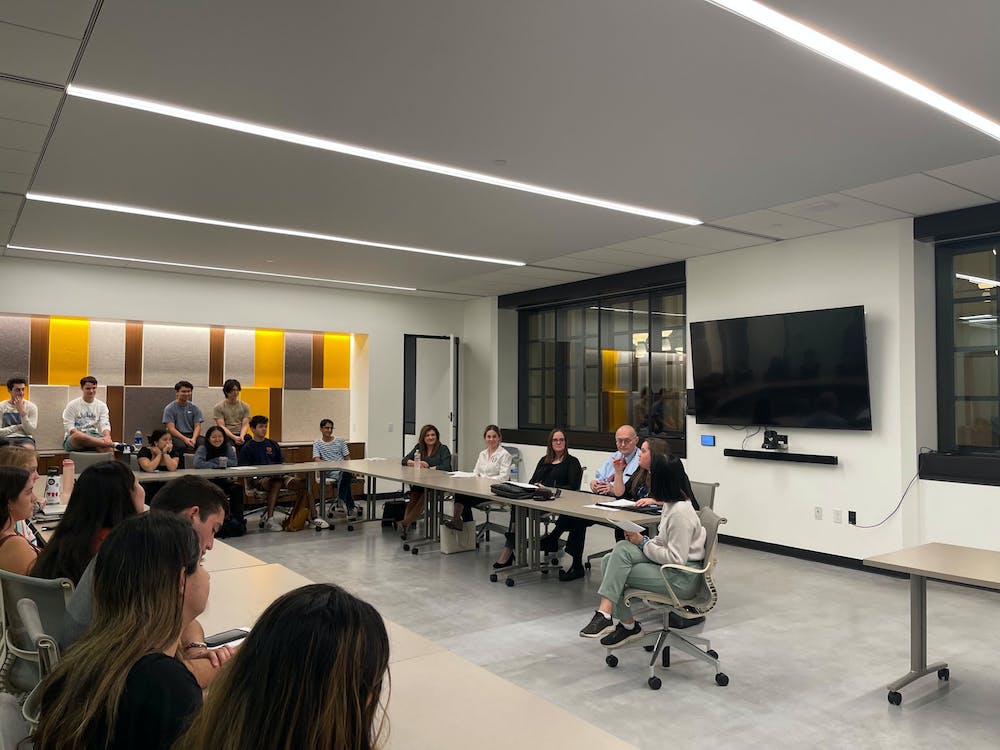 On Sept. 29, the Baker Institute Student Forum hosted an expert panel on abortion healthcare. The panel discussed topics like abortion from a healthcare provider’s perspective, abortion advocacy and creating a culture and community of trust at the university level.

Thomas Kovac and Oliver Hutt-Sierra, BISF presidents, said they were happy to see good attendance for an event that touched on a significant policy topic.

“Although BISF, as a non-partisan organization, does not endorse views on policy issues and poses neutral questions, the passionate and sometimes partisan discourse amongst the panelists demonstrated the importance of dialogue on this topic,” Kovac, a Wiess College senior, and Hutt-Sierra, a Martel College senior, wrote in an email to the Thresher. “We are always excited to host events that facilitate dialogue on relevant policy topics and we look forward to hosting more events this semester.”

El-Serag said she believes that health care policy should be driven by scientific data and not other factors, like ideology.

“We do have scientific data that is able to guide us in making, in creating or developing legislation that is in the best interest of the wellness of women in our society … Our role as scientists and healthcare providers is to provide that data and translate it into meaningful legislation,” El-Serag said.

Allison Stocks, president of the Planned Parenthood chapter at Rice, said she thinks abortion is necessary health care, whether that is chosen or medically required, and that it should be a right between the patient and their physician.

“I think this is a protected right, that was enshrined in [Roe v. Wade], and the overturning of that was contrary to stare decisis,” Stocks, a Lovett College junior, said.

El-Serag said that from a public health standpoint, health is viewed as more than just illness, but also includes the social determinants of health. According to the World Health Organization, public health includes all aspects of wellness, such as mental health, because these things impact outcomes like reproductive health.

“We’re not just talking about women [whose] lives are at risk because they have a certain underlying medical condition,” El-Serag said. “But we do know, for example, when women don’t have a choice, and they’re denied abortions, there is data that supports that ... there are several aspects of their lives that are negatively impacted, [like] their socio-economic impacts.”

Stocks said she thinks it is important to have conversations with educational experts, policy advisors, doctors, lawyers and friends about abortion because it is great for learning.

“Any conversation that brings up abortion normalizes it and more,” Stocks said. “And it needs to be normalized because it is a medical procedure that is not politicized in other countries for a reason; it is not something up for debate. But it is also something that even when it was legal and under Roe v. Wade, [when] people could get an abortion when they needed one or wanted one, it was still stigmatized.”

El-Serag said it’s important that every woman, or advocate of a woman, understands the gravity of the reproductive health situation in the United States and is well informed about legislation and the consequences of both.

“It is an infringement on a woman’s ability to decide what’s best for her health. And that, in my mind, is a fundamental insult to a woman’s right to determine her future,” El-Serag said. “But also from a medical standpoint, it interferes in the very important patient-provider relationship; that is part of the informed consent process that is so important in making women able to make the best decisions for themselves from a health standpoint.”

In an email to the Thresher, Juliana Phan, director of outreach for BISF, said that they hosted this event because they felt as though this discussion is necessary to have with people like college students, who are uniquely affected by the abortion policies.

“I understand that events like these can only do so much — conversation and discussion are just that, and knowing about a policy situation is not the same as changing it,” Phan, a Lovett College senior, wrote. “If it is within their capacity to do so, I hope that at least some people who attended the event are motivated to take this information and use it to advocate for what they believe in.”

El-Serag said that from a policy standpoint, this is a voting issue, and change needs to be brought about on the level of the state.

“It’ll be very interesting to see the outcome of this upcoming legislative session because there’s lots of legislation … [about] reproductive health rights,” El-Serag said. “I personally feel it’s going to depend on how critical of an issue this is to women in the state to women of lower socioeconomic status. If it is a significant enough issue to bring them out to the polls to vote, then we may get somewhere, but I’m not sure that there’s enough awareness yet about the gravity of the situation.”