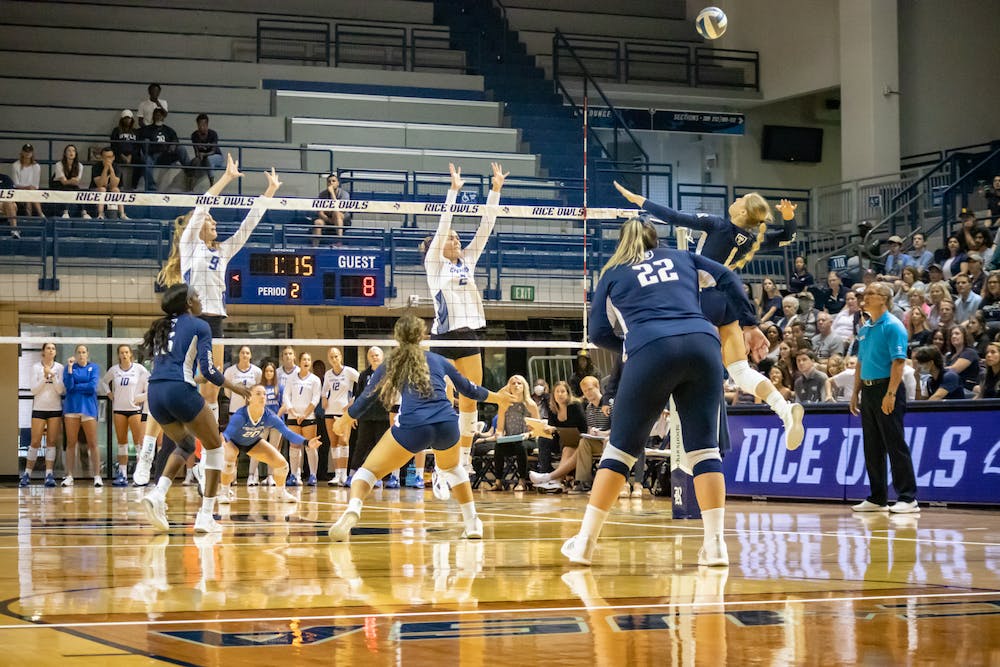 After the new rankings were released, fifth-year senior middle blocker Anota Adekunle was excited with the ranking but hungry for more.

“I definitely think it’s an awesome opportunity to be ranked top 25 and something we’ve worked so hard for,” Adekunle said. “Although we’re definitely pleased and grateful to be ranked at [No.] 23, we’re not stopping there. We’re striving to move up higher.” On Sunday, the Owls started off with a red-hot 10-4 opening run giving them a lead they never relinquished during the 25-22 first set. A combination of strong defense and five Creighton errors held the Bluejays to 0.191 hitting in the first set. Volpe said that early on the Owls were able to capitalize on the Bluejays’ struggles.

“Early on [Creighton] made a couple mistakes that were very uncharacteristic for them,” Volpe said. “We really tried to capitalize on them and it paid off. As the match went on, it was just a huge battle.”

The second set was indeed a battle, with the Owls holding to a 21-17 lead until a 8-1 Bluejay run tied up the match at one set apiece. Defensively, the Owls controlled the net with five blocks, but it still wasn’t enough to prevent the late Bluejays’ surge.

In set three, Adekunle came alive offensively, racking up nine of her match-high 23 kills on 49 attacks (0.408). Volpe had high praise for her star player for the career night she had and the numbers she put up as a middle blocker.

“I’m really proud of how Anota [Adekunle] took over there [in the third set],” Volpe said. “She had a huge game. As a middle blocker to have 23 kills and take almost 50 swings today is impressive.  I think that also just says a lot about our first touch, our back row and our defenders.”

The third set was made up of explosive runs from both teams, with the Bluejays up late in the set. The Owls pulled within one point, but a replay review awarded Creighton the decisive 25th point and the Bluejays took the set.

Finding themselves down one, in a potentially final set, the Owls dominated both sides of the ball and won set four 25-21, tying the match. Offensively, the Owls hit 0.375 as a team in the set, with junior outside hitter Sahara Maruska connecting on seven kills in the set while Adekunle continued to patrol the net on both sides of the ball, holding the Bluejays to 0.171 hitting. According to Adekunle, the Owls ability to come back from deficits is from the way they buy in to each other and their team.

“It just shows how much we’re bought into the program and how hard we fight,” Adekunle said. “No matter if we win or lose the first couple sets we’re always going out and giving all we have the whole match. We strive to not let being down a few points determine how the game will end and grit it out to the end.”

The final set was as contested as they come. With four ties and three lead changes, the set was tied at 14 until junior outside hitter Danyle Courtley, who connected on four kills in the set, blocked a Creighton attack to bring match point and then connected on her tenth kill of the afternoon to complete the upset.

In the three-hour marathon of a match, fifth-year senior setter Carly Graham rallied the Owls and earned her seventh Conference USA Setter of the Week award with an impressive 57 assist, 14 dig double-double. Volpe had nothing but praise for Creighton but said she was proud that her team came out on top.

“Creighton is just an awesome team and we have a ton of respect for them,” Volpe said. “They came out and were exactly what we thought they were going to be, great defensively and offensively. But like we talked about at the end of the game, we can never sell ourselves short ... We’re always going to try to keep those standards extremely high.”

Before defeating the Bluejays, the Owls opened up the Adidas Invitational II against the Kansas State Wildcats earlier in the weekend. Rice dropped the first two sets against their Big 12 opponent; the first went back and forth until a late 6-1 run by the Wildcats put it away. The second was even closer, with the WIldcats taking it 26-24. Service errors proved costly for the Owls in the first part of the match and following the match, Volpe said that a lack of discipline put the team in an early hole.

“I don’t think anything flipped for us, it just took us too long to play our game,” Volpe said. “Defensively we were out of whack and they were out-defending us. We were not very disciplined and I could sense that our defense was kind of affecting our offense.”

The Owls never faltered after falling behind 2-0, and thanks to a slew of Wildcat errors, a 10-2 run in the fourth set and a dominating Owls offense, the Owls completed the reverse sweep, winning the next three sets and sealing the match 3-2. Volpe said that after some adjustments on both ends of the court, the Owls execution shined.

“After two sets of it, our team was able to finally start executing at a high level,” Volpe said. “We started serving a little better where we had been struggling. I thought [Kansas State] did a good job of attacking us but once we did a better job of putting up a better block that helped us.”

The Owls will enter non-conference play with a 10-1 record, riding a six-game win streak. They return to the court this Friday at Tudor Fieldhouse against the University of Texas, San Antonio, looking to improve their win streak against the Roadrunners to 13. The first serve is at 6 p.m.