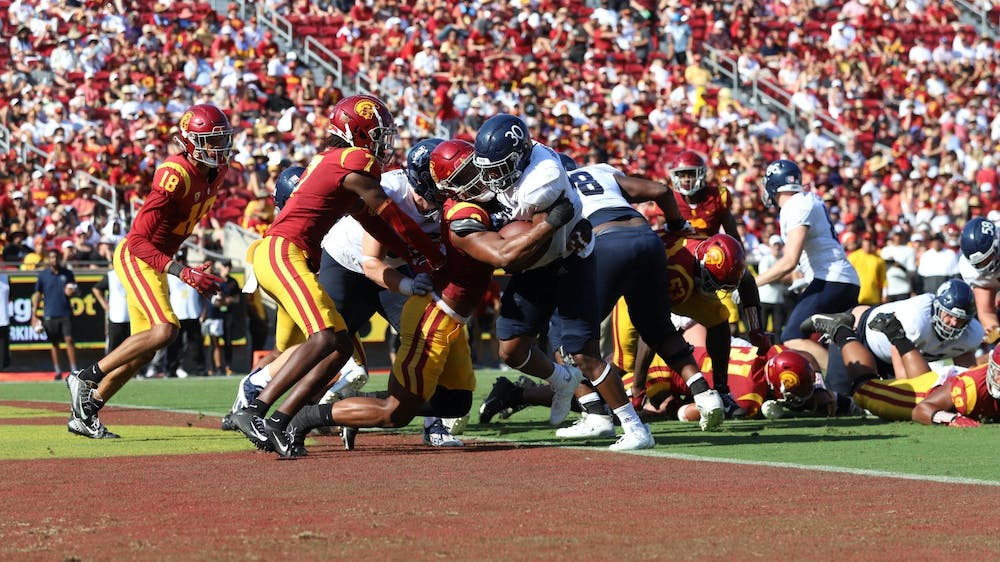 At least they might be the answer to a trivia question someday. The Rice football team lost their opener to No. 14 University of Southern California on Saturday by a score of 66-14. But if new Trojans head coach Lincoln Riley leads the fallen powerhouse back to its former heights as is widely expected, maybe some lucky fan ten years from now will win a round of shots for the table by remembering that his first opponent was the Owls.

Despite the lopsided final score, 33-point underdog Rice kept the game close for the better part of the first half. However, an injury to redshirt junior quarterback Wiley Green, along with a slew of interceptions that USC returned for touchdowns, ensured that the Owls wouldn’t come close to spoiling Riley’s debut. After the game, head coach Mike Bloomgren said he was surprised at how quickly the game got out of hand.

“That did not go the way we thought it would or the way we wanted it to,” Bloomgren said. “I thought we started the game off fighting them back and forth, making some good plays in there. Obviously they’re an explosive offense … I guess they’re going to do that to a lot of people.”

Led by a potential Heisman Trophy contender in quarterback Caleb Williams, a prized transfer whom Riley brought with him from the University of Oklahoma, the Trojans took the opening kickoff and marched 75 yards in seven plays, highlighted by a 43-yard third down completion, to score the game’s first touchdown. Rice responded, putting the 60,000 fans at the Los Angeles Memorial Coliseum on notice with a 16-play drive that nearly took up the entire rest of the first quarter. Twice facing third and long, Green found redshirt junior wide receiver Luke McCaffrey, playing his first game since switching positions from quarterback, to keep the drive alive. McCaffrey’s third catch of the drive set the Owls up with a first and goal at the USC seven yardline, but the Trojans held their ground, tackling McCaffrey inches shy of the goal line three plays later to force a fourth down. Bloomgren gambled on his offense, and redshirt junior running back Ari Broussard punched in the tying score from one yard out.

The next drive, the Owl defense managed to force a third and long but Williams hit receiver Kyron Hudson on a crossing route for 29 yards to extend the drive, and running back Austin Jones found the endzone three plays later. Rice quickly found themselves facing a third down on their next possession, but a pass interference penalty on Green’s incompletion to redshirt senior wide receiver Bradley Rozner was overturned on review, forcing Rice’s first punt of the game. The Trojans capitalized and in just four plays they had doubled their lead.

Redshirt senior running back Cameron Montgomery nearly cut the lead back to seven on the first play of the next drive, when he gashed the Trojan defense on a run up the middle for 55 yards. A seven-yard Montgomery run brought the Owls to the USC 13-yard line, but an incompletion and one-yard run forced a fourth-and-two. Bloomgren again gambled, but this time it had a very different result. Green rolled left off of a play-fake and had McCaffrey wide open in the flat for the first down, but the ball bounced off of the quarterback-turned-receiver’s hands and into the hands of USC defensive back Calen Bullock, who returned it 93 yards for the score.

To make matters worse for the Owls, Green injured his arm attempting to tackle Bullock on his way to the endzone and wouldn’t return for the rest of the game. According to Bloomgren, losing Green, as well as Montgomery who would leave the game at halftime, brought their offensive production to a halt.

“We were doing some great things,” Bloomgren said. “We were averaging seven [yards] a carry at halftime. You lose your starting quarterback and you lose a runner who rushed for 99 yards in the first half, the game changed for us offensively.”

With junior TJ McMahon in at quarterback for Green, the Owls looked as though they had been held to a fourth down early in the next drive but a review found a targeting penalty that extended the drive. The very next play, Mongomery repeated the trick with a 31-yard run to put Rice in the red zone, and Broussard capped the drive with his second touchdown of the day to bring Rice back within 14, just under two minutes before halftime. In the closing seconds of the half, the Rice defense forced one of just two fourth downs all game to hold USC to a field goal, and headed into halftime down 17. According to redshirt senior guard Shea Baker, he was proud of his team’s response to the turnover going into the half.

“We were playing well,” Baker said. “The first pick-six, that’s adversity, [but] we were ready to come back from it.”

That optimism disappeared within the first few minutes of the second half. Three plays into the opening drive of the third quarter, McMahon’s pass bounced off the hands of an open Rozner, right to USC linebacker Shane Lee, who outran McMahon to the endzone. Just three plays later, McMahon was hit as he threw and his pass fluttered to USC linebacker Ralen Goforth, who, not to be outdone by his teammates, also returned it for a touchdown.

To quote many an infomercial, but wait, there’s more. Four plays later, a McMahon pass bounced off of Rozner’s hands and found defensive back Xamarion Gordon for USC’s third interception in just under four minutes of game time. This one wasn’t returned for a touchdown, but USC reached the endzone for the seventh time two minutes later to put the game very comfortably out of reach.

“To say that things snowballed probably is an understatement,” Bloomgren said.

Down 52-14, Rice’s offense came to a halt, punting or turning the ball over on downs on each of their remaining possessions. USC scored one more touchdown before taking out their starters. Rice did manage to force one punt against the Trojans’ second team but they also gave up one more touchdown to bring the final score to 66-14. According to graduate safety George Nyakwol, the Rice defense was ready for what USC threw at them, they just didn’t perform.

“Lincoln Riley stuck to his [blue] print,” Nyakwol said. “These guys were definitely beatable. They didn’t do anything special. We were really beating ourselves.”

The Owls now return to Houston for their home opener against McNeese State University, which kicks off this Saturday at 6:30 p.m. According to Bloomgren, he thinks the team showed enough flashes this week to make him confident they can bounce back against the Cowboys.

“I don’t see anything as terminal,” Bloomgren said. “I’m not gonna hang my head on this [game], as a matter of fact I’m gonna go to work on McNeese as soon as I get back and move forward. I still think we’re a very, very good football team, and I think we showed it in spurts today but certainly not for a complete game.”