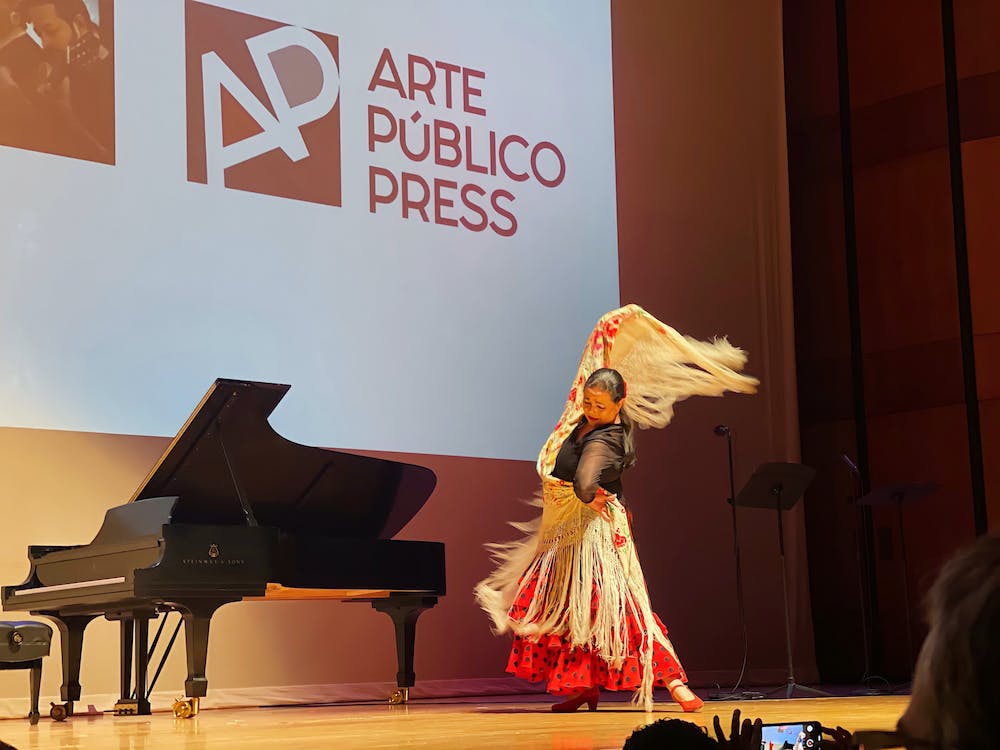 Juliet K. Stipeche (’96) said that Arte Público is a local treasure, and she credits the press for allowing more people to discover the rich history of Spanish, Latin American and Indigenous communities. Stipeche, the daughter of immigrant parents from Argentina and Mexico and the first attorney in her family, said she wasn’t aware of her own heritage when she came to Rice.

“If we don’t have opportunities to celebrate our history, culture and art, where will we go? So having Arte Público Press locally to be able to help support and empower all communities with that rich history is extraordinary,” Stipeche, now the director of human services at the Houston-Galveston Area Council, said. “I tell folks, ‘I have a world class education,’ yet I didn’t even know much about my own history and culture. It is because of leaders and institutions such as Arte Público Press that we can celebrate the rich history that exists and the future that we have together.”

Often, these historical narratives aren’t represented in our education systems. Arte Público’s founder Nicolás Kanellos created the press in 1979 from a literary magazine, “Revista Chicano-Riqueña,” which grew in popularity during the Chicano Movement. According to Kanellos, there was such a need for Latine history to be told that university classes were using separate issues of the magazine as textbooks. 40 years later, the Press is still wary of pushback.

“We have suffered the slings and arrows of conservative culture in the United States, of white nationalism and Christian nationalism,” Kanellos said. “Our books have been censored, they have been pulled out of curriculums, they have been pulled out of libraries. Some of our books have even been set fire to … And right now, of course, there’s these lists floating around that the legislature started in Texas that a couple of our books are on that have become targets. … We’re always looking over our shoulder to see who wants to censor us.”

In 1992, the publishing house launched the Recovering the US Hispanic Literary Heritage project, which is the first nationally coordinated effort to recover, index and publish lost Latine writings. According to Kanellos, discovering and making available the narratives left out of history books, museums and cultural institutions transforms national history from a Eurocentric perspective to a multicultural and multilingual one.

“At this particular moment in history, where Latinos form the major enrollments at the largest school systems in the country, it’s so important that we have materials that the students can relate to and call their own, and not forever be told that they’re outsiders, that they’re foreigners, that they didn’t contribute anything, and just learn about some boatloads of Europeans that landed at Plymouth and defined what the United States would be,” Kanellos said. “That’s absolutely a jaundiced view of what the country is.”

Richard Tapia, a Rice mathematics professor whose upcoming book, “Losing the Precious Few: How America Fails to Educate Its Minorities in Science and Engineering,” will be published through Arte Público, said that he experienced people telling him he was inferior as a Mexican-American growing up in Los Angeles’ barrios. To Tapia, representing U.S. minorities ensures a healthy nation.

Tapia said that he wanted Arte Público to publish his title for their advocacy work around Hispanic issues.

Stipeche, who worked with Tapia, said that he empowered underrepresented minorities and women in his program by building community, and that this includes celebrating culture, art, music and literature.

“That is a part of what Rice celebrates: unconventional wisdom. And unconventional wisdom requires us to take time to sit down and to see what’s around us — to look for wisdom beyond what’s in the traditional settings,” Stipeche said. “Arte Público Press opens up a world of opportunity for us to be able to embrace a more holistic perspective of community and of the world that surrounds us.”

For some, that world includes space exploration. Former astronaut and author José M. Hernández, who hosted the gala, has written three books through Arte Público about his journey to NASA from a family of Mexican migrant farmers. Hernández will be played by Michael Peña in an upcoming Amazon Prime film about his life, set for release in 2023. He said that his books inspire children to make their own dreams come true.

“It’s important because it’s an empowerment process,” Hernández said. “People look at me and they see [that I’m] similar to them and of similar socioeconomic background. And because of that, it has some type of empowering effect. [They say,] ‘Hey, if he was able to do it, why can’t I?’ So that’s why I love my story being told.”

Houston author, translator and educator Jasminne Mendez has also penned stories for younger readers with the goal of sharing diverse and empowering narratives. Mendez’s second young adult memoir, “Islands Apart: Becoming Dominican American,” was published by Arte Público last week and details her life as a Black Latina growing up in the south.

“One of the things that has always appealed to me is that they only focus on publishing Latine and Hispanic writers and amplifying those voices,” Mendez said of Arte Público, which selects 25 to 30 texts to be published every year. “They’re very specific to the kinds of stories by Latine writers that they publish that really focus on exposing the culture, and amplifying those distinct and individual experiences and opportunities that are found within specific Latine subgroups, cities and nationalities.”